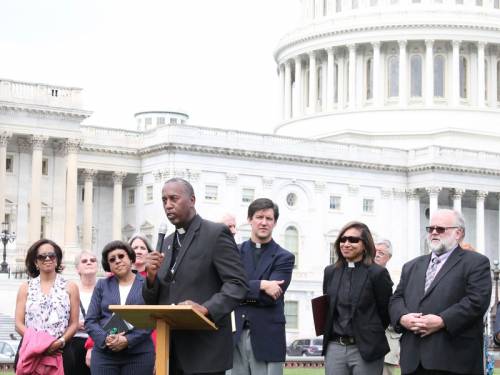 The Rev. Jimmie Hawkins, director of the Office of Public Witness, speaks during a press conference outside the Capitol. (Contributed photo)

LEXINGTON, Kentucky — The Presbyterian Church (U.S.A.)’s Office of Public Witness has joined the chorus of Americans calling on President Donald Trump to accept the results of this month’s election and begin the peaceful transfer of power to President-elect Joe Biden.

“After days of high anxiety and ballot counting, on November 7, 2020, former vice-president Joe Biden became the 46th president-elect of the United States of America,” the statement on the Office’s blog and emailed to subscribers to its Action Alerts says. “He received almost 79 million votes, has a sizable lead in the Electoral College, and insurmountable leads in each state he won. However, President Trump refuses to accept the reality that he lost and has yet to concede. His refusal prevents a peaceful transition to the new administration.

“OPW is not picking a side concerning this election. The current state of affairs places the nation’s well-being in jeopardy.”

On Nov. 7, most major media outlets projected Biden had turned back Trump’s bid for a second term, based on vote tallies released by state election officials, as his lead in the key swing state of Pennsylvania became insurmountable. According to reported vote totals, Biden now has 306 electoral votes, well over the 270 needed to win the election, to Trump’s 232.

But Trump and his administration have refused to concede the election and pursued fruitless lawsuits in some of the states key to Biden’s win.  The administration has also blocked the release of funds to start the transfer of power and the national security briefings the president-elect usually receives. In addition, administration staff has not been allowed to cooperate with Biden’s transition team.

The OPW statement cites the 9/11 Commission Report in raising concerns about the delayed transition. The report said that the delay in a final result of the 2000 presidential election between George W. Bush and Al Gore could have hampered the incoming Bush administration’s ability to identify the threats that led to the terror attacks of Sept. 11, 2001.

“(T)he outgoing administration should provide the president-elect, as soon as possible after election day, with a classified, compartmented list that catalogs specific, operational threats to national security; major military or covert operations; and pending decisions on the possible use of force,” the report said.

“To win, Mr. Trump must prove systemic fraud, with illegal votes in the tens of thousands,” Rove wrote in the Wall Street Journal piece OPW cited. “There is no evidence of that so far.”

Ridge joined several other former Homeland Security secretaries in calling for the transition to begin: “At this period of heightened risk for our nation, we do not have a single day to spare to begin the transition.”

The Office of Public Witness, the public policy information and advocacy office of the General Assembly of the Presbyterian Church (U.S.A.), concurs.

“The Presbyterian Church (U.S.A.) calls for President Trump to concede the election and move forward with a peaceful transition to the Biden Administration,” the statement concludes.

“Please pray for the country for a smooth and peaceful transition to the next administration. Pray that the issues that plague millions of Americans may be addressed as their needs are addressed effectively and rapidly. Let us all pray that the nation comes together. Even as we disagree on politics,” the statement says, “let us agree to live as one united through our faith in God.”

The Washington-based Office of Public Witness is one of the Compassion, Peace and Justice ministries of the Presbyterian Mission Agency.