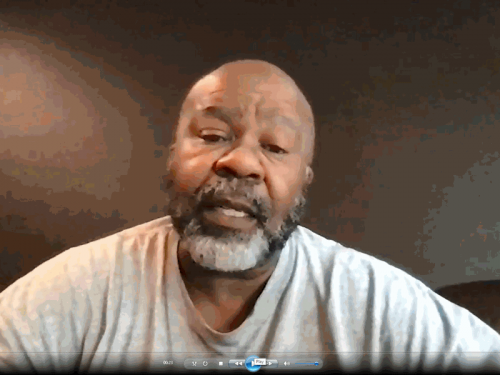 LEXINGTON, Kentucky — Twice during Wednesday morning’s virtual Transgender Day of Remembrance service offered by the Presbyterian Church (U.S.A.), a list of more than 40 people who were transgender who were murdered this year was shown.

At the end of the service, the Rev. Shanea D. Leonard offered a sobering observation.

“This service was put together by four individuals,” they said, “And it’s a reminder that the four individuals you heard could very easily be four names on that list next year.”

The Transgender Day of Remembrance began in 1999 and has been observed since then on Nov. 20. Wednesday’s service, which was the PC(USA)’s weekly chapel service, was the first time the denomination has presented a service to commemorate the day.

Click here to see the Transgender Day of Remembrance service in its entirety.

It was organized by Leonard, Coordinator for Gender and Racial Justice in the PC(USA)’s Compassion, Peace & Justice ministries; the Rev. Jess Cook of More Light Presbyterians; Myles Markham, Mission Specialist for Presbyterian Disaster Assistance; and the Rev. Louis Mitchell, whose long resume includes co-founding Transfaith and Operations Director of the Ingersoll Gender Center.

Leonard introduced Mitchell as “the Bishop to the Trans Community” before the United Church of Christ minister delivered his homily. Invoking Nehemiah 1:9, Jeremiah 30:17, and Zephaniah 3:19, Mitchell said that God repeatedly promises to restore people who are outcast.

“But what of modernity?” Mitchell asked. “Perhaps we’re waiting for an invitation or some instruction. We don’t really know how to bridge that gap.

“Examples of how to bridge the gap between our cis, hetero-normative, strict binary ways of thinking may feel hard to come by. I’m going to offer you an example of one who gave until the very end, one who stretched to embrace, care for, and encourage those who have been cast out.”

Mitchell proceeded to introduce Jahaira DeAlto, who Mitchell described as much more than simply the trans activist and ballroom icon that were often the shorthand to describe her.

“She said, ‘I am the mother who raised the children whose rainbow sparkled too brightly and blinded their birth moms,’” Mitchell said. “’I cherished what they discarded. I took on earthly assignments for the moms who had earned their heavenly reward for their babies who still needed raising, and I’m still doing, and I’ll keep doing that. I will never know what seeing my DNA reflected in another’s eyes could look like. But I know what gratitude in the eyes of a young person who finally feels seen looks like. And for me, that’s enough.

“This woman, assigned male at birth, who was raised, reared, run out of and dared to reclaim the church, who made it her life’s work to journey with the lost, abandoned, and despised; she who alchemized her street survival into a career of caring for women, all women, as a counselor, therapist, and prayer warrior, as they struggle to break free from abuse, and define past to fuller and more affirming lives, my friend, who died trying to protect someone else from harm, is but one example of a rich, beautiful life stolen from us this year.” 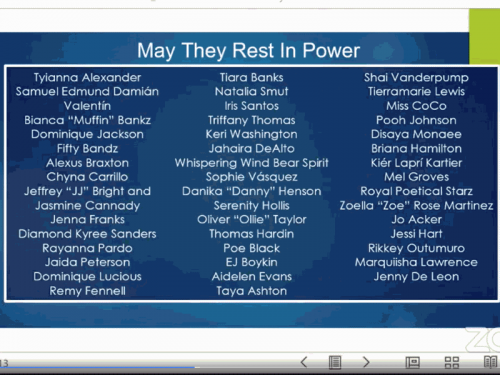 Wednesday’s service included this list of people who were transgender who were murdered during 2021. (Screenshot)

Cook preceded Mitchell’s sermon with a prayer of gratitude to God for the beauty of the world and people, but they said that is “stifled by this world that has no space for us. We come to you tired, tired of being two- dimensionalized, over-sexualized, criminalized, brutalized, tormented, erased, forgotten. We come to you in the trust and in the hope that the holiness of not only our lives, but the lives of all of our trans siblings, sisters, brothers will be lifted up in the fullness of their holy radiance.”

Markham offered a prayer of confession late in the service, saying organizers decided to save it until participants felt the weight of the day in the service.

“In your mercy, forgive these things that we’ve learned,” Markham prayed. “Help us to unlearn and to amend who and what we are. Come to the help of your people. As we mourn our losses on this Transgender Day of Remembrance, turn us from despair and fear toward hope and full relationship with ourselves, with you and with our neighbors.”

In that spirit, near the close of his homily, Mitchell offered a variation on a request he made in a video message previewing the service, where he said, “I want you to leave your church, your campus, your office, wherever you’re located, and go find my community. Stop leaning on the one trans person you know to be your connection to an entire broad, deep, diverse, amazing community.”

Drawing the message to a close, he cited DeAlto and said, “For her and all the others, known and unknown, named, unnamed, and misnamed, I implore you to strengthen your reach, to care about us before our names are read at memorials like today.”

Click here to see a video of the service organizers discussing their feelings about the event.