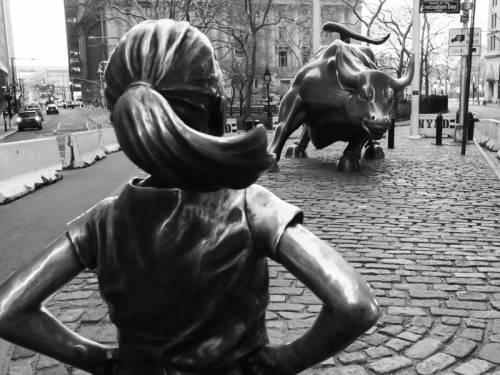 A sculpture of a little girl by Kristen Visbal commissioned by State Street Global Advisors faced off against the iconic Wall Street bull in 2017-18. (Photo by Daniel Lloyd Blunk-Fernandez via Unsplash)

LEXINGTON, Kentucky — The Interfaith Center on Corporate Responsibility is suing the Securities and Exchange Commission over new rules that would significantly limit the voices of shareholders in corporate governance.

“I am grateful to ICCR’s leadership in this lawsuit as faith-based and values-based investors have been advocating against these SEC rule changes for several years, and if implemented would vastly restrict the rights of shareholders,” Fohr said. “These rule changes are indicative of the previous Administration’s desire to favor corporate lobbying interests over the rights of investors and are totally unnecessary because there are already robust rules in place that govern this process.

“A strong argument can be made that the ICCR faith-based investor coalition did a lot of the pioneering work of utilizing shareholder proposals, through SEC Rule 14a-8, to effect change in publicly traded corporations. To this day, the PC(USA), through MRTI, files or co-files about 12 proposals per season, and we see it as an important intervention in our shareholder engagement process.  This lawsuit aims to protect our ability to do that.”

The suit was filed in the U.S. District Court for the District of Columbia by ICCR, which represents more than 300 faith-based institutional investors with more than $4 trillion invested; As You Sow, a non-for-profit shareholder advocacy group; and James McRitchie, one of the most active individuals submitting shareholder proposals related to corporate governance in the U.S.

The rule in question was pushed through in 2020 by SEC appointees of former President Donald Trump and is set to take effect next year. The changes instituted by a party-line vote in September say an investor would need to own $25,000 in stock for at least one year to file a resolution in the company’s proxy or $2,000 for three years. Currently, $2,000 for one year is the threshold.

“The new rule guts the existing shareholder proposal process, which has long served as a cost-effective way for shareholders to communicate their concerns to management,” said Josh Zinner, CEO of ICCR. “The rule provides little serious economic analysis supporting the need for these substantial changes. It is instead based on the wholly unsupported assumption that shareholder proposals are simply a burden to companies with no benefits for companies or non-proponent investors when there is 50 years of evidence to the contrary.”

The change comes at a time that investors are enjoying a lot of success impacting corporations on Environmental, Social, and Governance (ESG) issues that address how they relate to the environment and people, from employees to communities where the operate. Earlier this month, MRTI hailed a highly successful proxy season in which two resolutions the committee led or co-filed received majority votes from United Airlines and Phillips 66 and four other proposals were withdrawn, meaning the companies agreed to the proposals without putting them to a vote.

“The Presbyterian Church (U.S.A.) is in a unique position to influence corporate America, in communion with other faith- and values-based investors,” Fohr said. “MRTI is celebrating 50 years of bringing attention to environmental, social and governance issues important to Presbyterians and are seeing success.”

In one of the most dramatic examples of growing shareholder influence, an activist hedge fund managed to get three of its members elected to the board of ExxonMobil, arguably one of the most hostile companies to ESG proposals. Exxon had attempted to get a resolution MRTI co-filed thrown out, but the SEC, with new appointees from President Joe Biden, rejected the request.

In requesting the rule change, the companies said including investor proposals in their proxies are costly. But the lawsuit claims that the benefits are greater to companies that have followed ESG proposals.

“We encourage companies to address ESG risks that have the potential to significantly erode long-term shareholder value,” said Amy D. Augustine, Director of ESG Investing at Boston Trust Walden, an associate member of ICCR. “Engagement with companies has led to an impressive track record of improved corporate oversight and management of material risks. Evidence abounds in this proxy season alone, in which dozens of proposals were withdrawn as a result of negotiated agreements between company management and shareholders.

“This suit is essential to keeping the process fair and reasonable.”