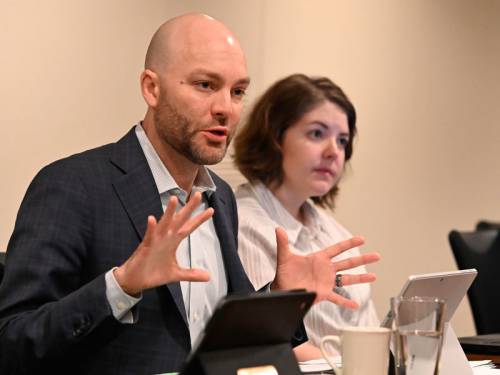 Rob Fohr, director of Faith-Based Investing and Corporate Engagement for the Presbyterian Church (U.S.A.), speaks during a meeting of the Presbyterian Committee for Mission Responsibility Through Investment in Romulus, Michigan, in 2019. To Fohr’s left is Katie Carter,  Associate for Research, Policy and Information. (Photo by Rich Copley)

Responsible investors like MRTI have long utilized the strategy of filing shareholder proposals to advance significant policy matters related to unmanaged or undermanaged risks for publicly traded corporations, proposals that usually focus on environmental, social and governance (ESG) matters. These proposals are put up for vote by all shareholders at the annual general meetings of companies, which mostly take place April-June.

Rob Fohr, Director of Faith-Based Investing and Corporate Engagement for the PC(USA), and lead staff to MRTI, called the 65% vote “astronomical” and said in almost every case, corporate management and boards recommend voting against ESG-related proposals — and it is a very big deal if a proposal gets a majority vote. This year, however, ESG-related proposals are registering incredibly high votes as large asset managers are choosing to vote in favor of many of these proposals in numbers not previously seen.

Part of the change in how proposals are playing out, Fohr says, is a shift in the Securities and Exchange Commission (SEC), which is now more inclined to side with shareholders, particularly on environmental and social governance proposals, when companies ask for the proposals to be omitted from the proxy statement.

The Phillips 66 resolution called on the Board of Directors to evaluate and issue a report by next year describing how the company’s lobbying activities “align with the goal of limiting average global warming to well below 2 degrees Celsius,” the goal of the Paris Climate Agreement, which the U.S. recently rejoined. The Paris-aligned lobbying resolution was similar to resolutions MRTI co-filed with five other corporations, including United Airlines. The other four were withdrawn, meaning the companies agreed to take action without putting them to a vote.

With ExxonMobil, the approach is a bit different, as MRTI and its co-filers asked the company to issue an independently audited report showing how a significant reduction in fossil fuel demand in the International Energy Agency scenario of net-zero greenhouse gas emissions by 2050 would “affect its financial position and underlying assumptions.”

Fohr says Exxon, which has been resistant to calls for the company to address shifting its strategy to meet low-carbon demand scenarios and drastically reduce its greenhouse gas emission profile, asked for the resolution to be omitted from its proxy statement. But that request was rejected by the SEC.

Exxon ended up in the headlines last week as Engine No. 1, an activist hedge fund, successfully won at least two seats on Exxon’s board of directors, with the stated intention of pushing the fossil fuel giant to take climate change seriously. Anne Simpson, chair of the steering committee of climate investor group Climate Action 100+, which MRTI is a part of, told NPR, “This is a day of reckoning. Investors are no longer standing on the sidelines.”

Part of the fund’s campaign echoed the MRTI co-filed proposal’s questions about the company’s financial readiness for a world moving away from oil and gas.

“Both the climate lobbying angle and the auditing angle are newer — especially the auditing one — tactics that shareholders are using to address climate change with heavy emitters,” said Katie Carter, Associate for Research, Policy and Information in the Office of Faith-Based Investing & Corporate Engagement, which supports the work of MRTI.

MRTI was the lead filer on five proposals, which Fohr said is a record for MRTI. The issues included Paris-aligned lobbying, a call for a report on human rights risks in conflict-affected and high-risk areas policy, and a lobbying disclosure related to reproductive rights.

“This was a very successful season for us in negotiating withdrawals of our shareholder proposals, meaning the companies basically committed to something that we were asking without going to a vote,” said Fohr.

In the case of Exxon, MRTI wouldn’t have been able to co-file the proposal this year if the 224th General Assembly of the PC(USA), meeting online last summer, had voted to put the fossil-fuel giant on its divestment/proscription list. MRTI recommended ExxonMobil, along with Marathon Petroleum and Valero Energy, to go on the list after they had fallen into the bottom tier of the committee’s guideline metrics. But the vote was not held at the June 2020 meeting, which was modified due to the COVID-19 pandemic.

The revised MRTI recommendations will be considered at the 225th General Assembly in 2022.

Fohr says that while divestment recommendations are made for good reasons, the committee does not necessarily view them as wins, and this meeting season illustrates why remaining engaged as shareholders is important.

“If we were not in these conversations and working with our partners to file these shareholder proposals, these companies would not be moving in this way,” Fohr says. “And so that’s very exciting.”

MRTI and the church in general regularly receive calls to broadly divest from fossil fuel companies, and many churches and mid-councils have done that. But Fohr says the committee sees different levels of engagement on environmental concerns from companies, and that phased selective divestment makes a bigger social witness impact, as MRTI saw during its early years working against apartheid in South Africa.

Companies worth tens and sometimes hundreds of billions of dollars are not going to care if the PC(USA)’s investing agencies sell a few million dollars of stock, Fohr says. But what they will care about is a headline that says the church singled the company out for divestment.

“That kind of action will make it into major press publications, and other investors will see it and may say, ‘That is an interesting approach — this may be a path for us to consider?’” Fohr says. “Divestment is an important tool, but it is the last tool, and for MRTI, it is a challenging road to walk because divestment is not the goal of General Assembly policy.

“The goal is moving publicly-traded companies’ policies and practices towards alignment with the values of the Presbyterian Church (U.S.A.).”

In 2021, things are moving in that direction.