Christmas Joy Offering – Supporting our leaders: past, present and future.
Make A Donation Click Here >
Home › PC(USA) participants bring diversity of purpose to UN Commission on the Status of Women 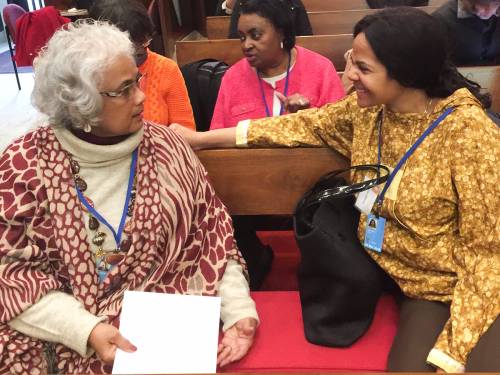 Wanda Beauman (left) and Sharon Gibbons (right) share an interest in advocating for women who have experienced domestic violence. (Photo by Sue Washburn)

NEW YORK — The participants at the 62nd Commission on the Status of Women (CSW) at the United Nations come from all over the world and their interests are as varied as their geography. Bulletin boards boast a wide variety of event invitations. From advocating for LGBTQI rights to exploring feminism and Korean TV to genital mutilation in Africa, chances are if the issue affects women, it’s being addressed by a UN agency or by one of the many Non-Governmental Organizations (NGOs) that sponsor lectures and discussions.

PC(USA) participants are also varied in their interests as they seek to learn from such a culturally rich experience. The oldest participant is 89 and the youngest is 21. Some are at the CSW for the first time while others make a point to attend as often as they can. What draws them together is their desire to advocate for justice for women and girls.

This is the fifth time Wanda Beauman of People’s Presbyterian Church in Denver, Colorado has attended the Commission, she is excited to see so many younger participants.

“I’m especially interested in hearing the stories of young women and first-time attendees,” she said.

The Presbyterian Ministry at the United Nations along with the Ecumenical Women of the United Nations are emphasizing women’s empowerment in governance and structures and seeking to eliminate all forms of violence against women, including domestic abuse. One of the goals put forth is to coordinate approaches that allow for the prosecution and punishment of the perpetrators of violence as well as offering the psychosocial support that women and girls need after such an encounter. 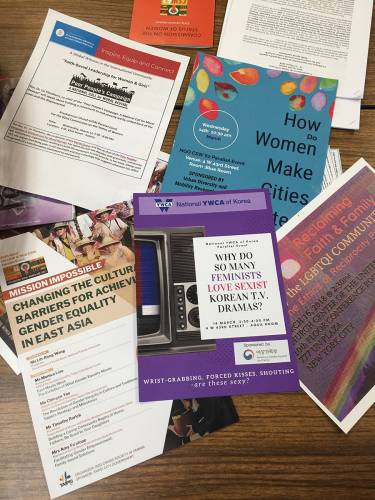 Participants at the Commission on the Status of Women have the opportunity to explore issues that impact women around the world. (Photo by Sue Washburn)

Beauman plans to work with domestic abuse victims in the United States who have been jailed for fighting back against and sometimes killing their abusers. She’s been connecting with other Presbyterian women at the CSW for the past four years and is working to increase awareness of state laws that don’t take domestic abuse into account in court. Participation at CSW inspires her work at home.

“This is the most broad scale women’s empowerment organization that I’ve been involved with and I so value that the United Nations has made it an integral part of the work that they do,” Beauman said. This year she has connected with Sharon Gibbons of Visited Eagle Presbyterian Church in Alaska to address issues of legislation and domestic violence, a prevalent problem in Alaska.

Sarah Whicker of Louisiana Works with healing as well but in a different way. Whicker is a fan of yoga, herbs and natural healing. As the Peace and Justice coordinator for the church’s Presbyterian Women she coordinates a community garden as part of the Creation Care initiative. She’s also pursuing teaching certification for yoga. At CSW she met the founders of the International Day of Yoga and is looking forward to including new avenues for mental health and well being in the work she does.

“I’ll share what I’ve learned with our local partners at home, including a foster home for girls and a safe house for women who have been involved in human trafficking. I look forward to seeing what we can come up with together,” she said.

Empowering women and girls in government and eliminating violence against rural women and girls is one of five emphases that the Presbyterian Ministry at the United Nations, in partnership with the Ecumenical Women of the U.N., are emphasizing as part of the CSW.

Climate change, farming and food sovereignty, education, access to transportation and resources as well as medical care and reproductive rights are also part of the global agenda.

“We have to remember that we are part of a global organization and not solely U.S. focused,” said Ryan Smith, director of the Presbyterian Ministry at the UN. “These are issues that are important around the world.”

The challenge for participants is synthesizing all of the information from around the world and applying it at home.

“The things that we are asking the U.N. to do can be done at the local level. Our participants can insist that their church council or city council or their school board are gender balanced or that safe and reliable transportation is available. It doesn’t matter if that community is in Madagascar or Michigan,” said Smith.