At one Presbyterian church in New Mexico, 240 guns were turned in for dismantling, topping even the total at the Broncos’ stadium in Denver 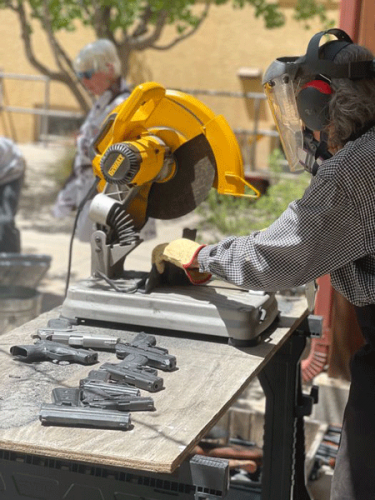 While thousands of Americans were marching for gun safety in 450 locations and 20 U.S. senators were working on a compromise gun reform bill, a group of congregations across the nation turned on their chop saws.

On Saturday, a dozen local congregations hosted the first National Guns to Gardens Day, turning unwanted guns into garden tools. Many of them were Presbyterians.

“We dismantled 36 guns in Utah today, including one assault rifle,” said Nancy Halden, coordinator of the Guns to Gardens event at Community of Grace Presbyterian Church in Sandy, Utah. “It was a big success with three TV stations and both newspapers here.”  Halden’s goal is to offer a responsible way for gun owners to dispose of unwanted guns without returning them to the gun market where they could do future harm. She values publicity because the goal of the new movement is to grow. The vision? A network of congregations across the nation where Americans can safely surrender unwanted guns, which are dismantled and forged into garden tools, art and other useful items. 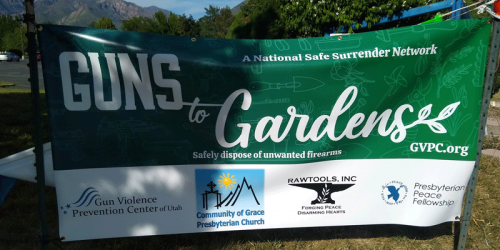 A banner welcomes gun owners to the event in Sandy, Utah. (Contributed photo)

“We have well over 400 million guns in the United States,” says Rev. Deanna Hollas, Coordinator of the Gun Violence Prevention Ministry of the Presbyterian Peace Fellowship, which supported the national event with a training program, in conjunction with the nonprofit group RAWtools. “There are many reasons that someone would surrender a gun. There may be conflict, illness or a crisis in a family. Older hunters and gun collectors may no longer feel that they can safely handle guns. Or they may have children and teenagers visiting in the home. Or law enforcement may have returned a gun to a family after their loved one used it in a suicide. The church is well-equipped to accompany gun owners through the surrender process. For the church to help turn guns into garden tools can provide hope and healing to communities that have been traumatized by gun violence. It also challenges our national and state elected officials to do everything they can to save lives.”

Trained volunteers dismantle guns by using rules from the Bureau of Alcohol, Tobacco, Firearms and Explosives (ATF). All guns were accepted unloaded. They are checked at the event and no ammunition is accepted. Most events are “drive through” events, which makes a church parking lot an ideal site. While the concept of repurposing guns into tools has proliferated on a limited basis over the years, the first Guns to Gardens event held at a church was on June 13, 2021 at Community United Church of Christ in Boulder, Colorado, as a concrete response to a mass shooting at their local grocery store. 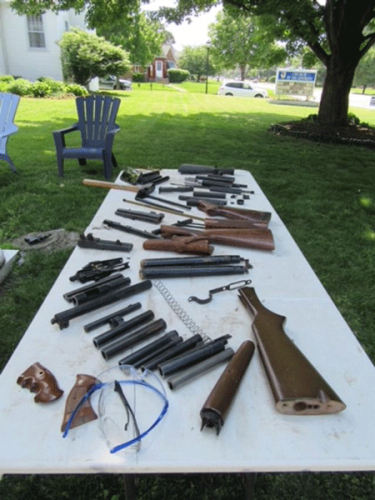 Gun parts collected at Church of the Epiphany in Euclid, Ohio. (Contributed photo)

Results on Saturday included “a great success” at First Community Church in Columbus, Ohio, which received 14 guns. Over 40 guns were dismantled at the Church of the Epiphany in Euclid, Ohio, including one gun owner who brought 18 firearms.

In Wisconsin, Presbyterians the Rev. Scott Marrese-Wheeler, pastor of Oakland-Cambridge Presbyterian Church in Cambridge, and elder Lois Love of Chicago’s First United Church of Oak Park joined as volunteers at Midvale Community Lutheran Church in Madison. Marrese-Wheeler reported that 29 guns, including two AR-15 assault weapons, were turned in. His own congregation has voted to hold a Guns to Gardens event later this summer. Retired Lutheran pastor Jeff Wild led the Madison event. After a ministry in which he officiated at nine funerals of gun violence victims, he now spends his retirement chopping up guns and forging them into garden tools. 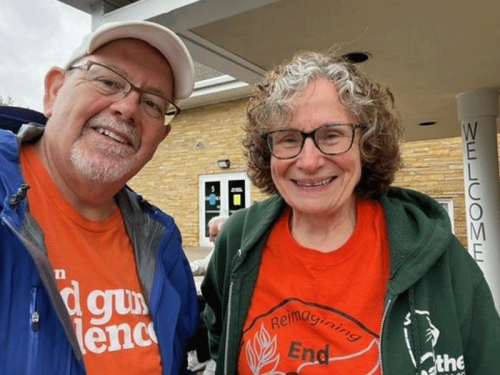 Presbyterians the Rev. Scott Marrese-Wheeler and Ruling Elder Lois Love meet for the first time at the Guns to Gardens event at Midvale Community Lutheran Church in Madison, Wisconsin. Both serve on the Gun Violence Prevention Working Group of the Presbyterian Peace Fellowship, which helped to organize the national event. (Contributed photo)

Members of First Presbyterian Church of Stockton, California, participated as “shepherds,” offering pastoral care to gun owners on Saturday at an event in Oakland. Presbyterian elder and retired teacher Cheryl Hunt reported that 75 vehicles drove through the event, voluntarily surrendering 131 guns, including several Glocks and assault weapons. “One woman brought in 25 guns,” said Hunt. “She had stored them under her sofa for 17 years and had not been able to sleep with these weapons in her home. Tonight, she will sleep.” 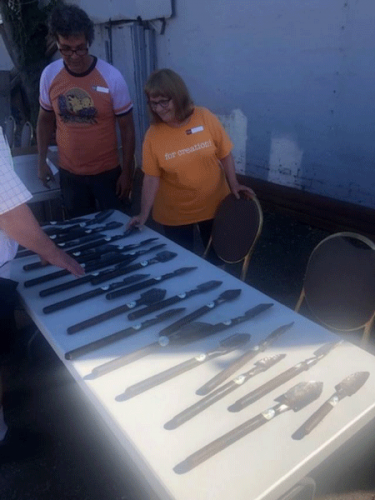 One added benefit at the Oakland event was that the Chief of Police stopped by to pledge his help in securing funding for the next Guns to Gardens event.

Episcopal Bishop James Curry of New Haven, Connecticut, reported that his local police were so impressed on June 11 that they offered to fund another Guns to Gardens event in New Haven this summer. Some Guns to Gardens events are “give backs” where gun owners simply give the guns to be dismantled. Others can require significant funding to provide gas and grocery gift cards to gun owners, in thanks for surrendering their weapons. These so-called “buy back” events generally bring in larger quantities of guns and more dangerous guns, such as assault rifles. For gun “buy backs,” the gun is not actually bought and there is no transfer of ownership. The gun owner remains present during the dismantling and may donate the leftover parts, no longer legally a gun. The optional gift cards thank gun owners and provide an incentive for safe surrender.

The largest number of firearms surrendered on June 11 was at the Guns to Gardens event at La Mesa Presbyterian Church in Albuquerque, New Mexico. “We had a fantastic day. Cars were lined up down the street for almost two hours straight,” said Rev. Harry Eberts, co-president of New Mexicans to Prevent Gun Violence and pastor of First Presbyterian Church of Santa Fe. “The La Mesa Church parking lot worked out wonderfully. We received 240 guns and, when we ran out of gift cards, people just gave us the guns. They just wanted to get rid of them.”

On July 3, Eberts, co-president Miranda Viscoli and New Mexicans to Prevent Gun Violence will receive the Peaceseeker Award from the Presbyterian Peace Fellowship for their visionary work to prevent gun violence. So far, NMPGV has held 14 safe surrender events, dismantling 1,277 firearms, of which 33% were semi-automatic assault weapons. The online celebration will be on July 3 at 7 p.m. Eastern Time in conjunction with the 225th General Assembly. Register at www.presbypeacefellowship.org/events

As the Guns to Gardens movement grows, the Presbyterian Peace Fellowship will continue to offer training for congregations through Action Circles that bring participants together online. There will be two Guns to Gardens Action Circles, one hour weekly for six weeks, starting Aug. 18. This training covers safe chop saw procedures, publicity, pastoral care, gift card options and best practices learned from prior Guns to Gardens congregations. The next national Guns to Gardens day is under discussion for the days surrounding the 10th memorial of the Sandy Hook Elementary School shooting in early December. Learn more here.

Founded in 1944, Presbyterian Peace Fellowship is an independent nationwide community of Presbyterians who follow the example of the nonviolent Christ to find alternatives to violence, war and exploitation.