#GivingTuesday – Join the PC(USA) in responding to a world in need! Give now!
Make A Donation Click Here >
Home › PC(USA) church brightens its community with a paint-by-number mural featuring a beloved Presbyterian pastor

It sat on a one-way street, and the 1950s addition to the much larger sanctuary barely merited a backwards glance.

But when the city of Manitowoc changed the street to a two-way, Rev. Matt Sauer, the church’s pastor, began to see that 1950s addition as a blank canvas — and an opportunity.

“Now, suddenly, when driving south you see the church from a different angle,” explained Sauer. “Instead of seeing the grandeur of the 1870s architecture you would just see this parking lot with a large brick wall.”

That was the genesis for the church to host an unusual gathering in early September: a paint-by-numbers mural project on the side of the building celebrating Fred Rogers and one of his central messages, “Listening is where love begins.” See images of the mural and watch its progress by clicking on the video above.

Dozens of people gathered to complete a beautiful mural started as a public arts project — and the blank wall became a ministry.

This project is an extension of the church’s ministry and much in line with what it is already doing in the community.

First Presbyterian Church was founded in 1851. The sanctuary, still in use today, was dedicated in 1870 and reflected the grandeur of the architecture of the time. In the 1950s a “new” addition was constructed on the property, reflecting the more utilitarian style of the day.

What is innovative and unique about the ministry is its impact on and heart for the community. They host meals on a regular basis and are hoping to create a warming space for the homeless this winter. If there is a community need, Manitowoc Cooperative Ministry seeks to fill it.

Five years prior, the community had begun a public art project, including murals that slowly started popping up around town on the sides of buildings, utility boxes and retaining walls. Sauer began formulating an idea to transform the brick wall.

“What if we could put a mural on our brick wall and invite the community to come out and paint it together?” he began to ask.

He took the idea to leaders in the community, wondering if it could even be possible to paint a community mural on a church property with all the regulations related to church and state. The community leaders jumped at the idea — as long as the theme would not be directly “religious.” Such overt representations of the gospel were not really in the church’s style anyway.

Sauer took the news to First Presbyterian Church’s session to see how they might respond. How might they communicate the gospel message in a way that would suit the community and be true to the congregation’s calling?

Won’t you be my neighbor?

“That’s when we began to think about a theme around Mister Rogers,” Sauer explained. “Who better than a Presbyterian minister who represents openness and welcoming and a space where everyone matters?”

Sauer took the Mister Rogers idea to the artists who were commissioned for the mural. Erin LaBonte and Don Krumpos researched and came back with the idea, which would be based around the Mister Rogers quote, “Listening is where love begins.”

“Don and I have been fortunate to work with community members, the city, private and public sponsors, nonprofits and grassroots organizations to make projects like this one happen,” said LaBonte, an artist. “We were stoked when Matt reached out and shared his vision for Mister Rogers and immediately started watching reruns to remind ourselves about the special man that Mister Rogers was. The quote we chose for the mural seemed to really capture his message.” 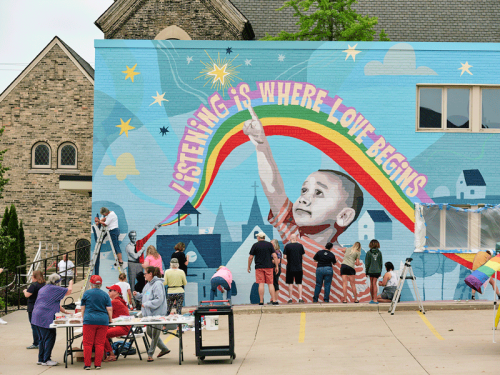 This mural, painted by the community and designed by a pair of artists, now enhances what was a blank wall at First Presbyterian Church in Manitowoc, Wisconsin. (Photo by Jon Erlien)

The mural is not a direct scene from “Mister Rogers’ Neighborhood,” but a representation of a city, a rainbow, a figure and the quote. “The rainbow is an important symbol of our faith but also in culture, representing the promise of God’s welcoming love and grace,” Sauer said.

There is also a life-sized Mister Rogers in one corner, perfect for taking a selfie.

Making it a community effort

Sauer wanted the welcoming message to not just be in the finished product of the mural, but in the process as well. Though the artists painted the higher sections of the mural, the lower and more accessible sections were all created to be paint-by-numbers so that member of the community could participate.

“This project was the fifth annual Lakeshore Artists Guild’s CommUNITY paint- by-number mural,” explained LaBonte. The first year they tried it, they weren’t sure whether or not it would work.  “Sure enough, the community came out and within six hours the wall was painted. The project has become more and more popular, and the wall seems to get painted a little faster each year!”

“The day of the event people showed up early. We had people two to three deep, and had to encourage people to give others a chance to paint as well,” Sauer said.

There were small children who could barely hold a paintbrush and people in their 90s painting alongside each other. The church had a DVD set up in the parking lot playing episodes from “Mister Rogers’ Neighborhood.” There was music. They had a bake sale with cookies in the shape of a Mister Rogers sweater and frosted in red.

Listening to and loving one another

Sauer was overwhelmed by the stories people came up to tell him as the day progressed. “I never thought a church would do something like this,” one person told Sauer. “You are really saving church for me.” 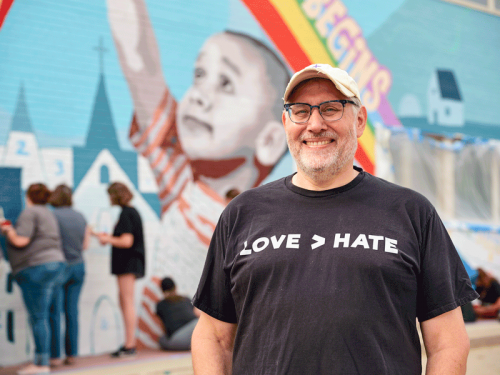 It was something that Sauer had not expected but welcomed. One church member had his granddaughter, who does not attend church, ask if she could come to church with him on that day to help paint the mural.

The following weekend the church held worship outside in the parking lot in front of the mural and included a dedication ceremony. “Now that this picture is up here and these words are here, we have made it a challenge for those of us who come in and out of this building,” Sauer said. “How are we listening to the community and how are we loving one another?”

Erin Dunigan is an ordained evangelist and teaching elder in the PC(USA). She is a graduate of Princeton Theological Seminary. She serves as a photographer, writer and communications consultant and lives near the border in Baja California, Mexico. In her free time, she is an avid gardener and leads horseback riding tours along one of the most pristine stretches of beach in Northern Baja. Send comments on this article to robyn.sekula@presbyterianfoundation.org.