The shift is toward intergenerational faith formation 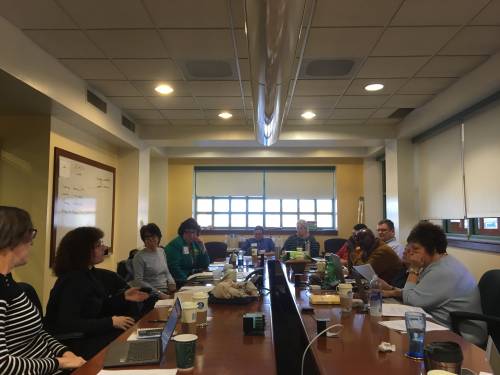 LOUISVILLE —  In her 15th year of teaching Christian education at Union Presbyterian Seminary in Richmond, Va., Karen-Marie Yust had never received an invitation to be part of a conversation like this.

She, along with faculty and staff representing seven PC(USA) seminaries, gathered around a table last week to offer input on Christian formation — a field that is shifting its focus from age and stages ministry to intergenerational faith formation.

“We wanted the voices of our Christian education and formation professors to contribute to how we might effectively cultivate conversation about intergenerational faith formation in the church,” said Jason Brian Santos, coordinator for Christian formation in the Presbyterian Mission Agency. “This is the first time we’ve attempted to have a conversation with all of them present together in the same room at the same time.”

“About 10 to 15 years ago, scholars in education, psychology, and health and well-being began orienting themselves toward lifelong and intergenerational learning,” said Yust.  “The church could really benefit from current resources in these related areas if we looked to them as conversation partners.”

As an example, she asked, “how might we tap into what people looking into well-being from an intergenerational learning perspective have discovered — and share that with congregations by looking into spirituality in a similar fashion?”

As the seminary professors wrapped up their three-day gathering, Columbia’s Christine Hong and Marcus Hong from Louisville discussed the different perspectives offered by immigrant generational theories.  Those gathered agreed that these theories should also be included in Santos’s framing of Christian formation ministry’s movement toward intergenerational formation.

“We suggested that he begin with appreciative inquiry in presentations on this shift,” said Yust, “that he lead with questions about others’ experiences — to find out what they know about generational and intergenerational relationships in their context, rather than with theological theories and resources that have influenced him.”

Then, she said, he could share his work experience in a youth ministry setting — which has influenced the movement away from “ages and stage” ministry to intergenerational formation.

“That way the church can build a shared consensus and definition together, based on experiences in diverse contexts,” Yust said, “which will generate more buy-in.”

Santos shared how seasoned practitioners from the PC(USA)’s five “ages and stages” ministry associations are in collaboration with the office of Christian formation with regard to lifelong Christian practices of faith including service, prayer, storytelling, hospitality and Sabbath.

“We’re now discussing ways of how these practices can be implemented in intergenerational ministry and formation,” he said. “To help strengthen our small church ministry — as many mid-size and large churches already have programming in place for these practices in their age and stage ministries.”

David Maxwell, who will on Jan. 1, 2019, become the vice president and executive director of curriculum publishing for the Presbyterian Publishing Corporation, also attended the collaborative gathering.