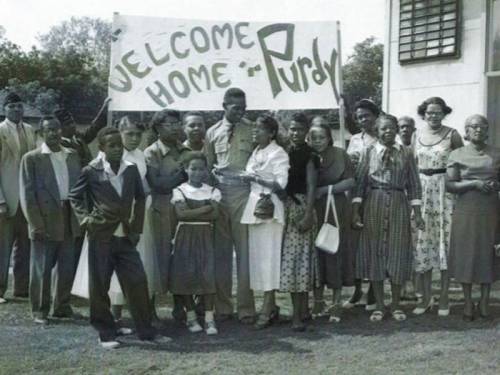 LOUISVILLE — If Kanda Fletcher’s late father — a former prisoner of war during the Korean War— had been a military officer, he would have received full military honors when he was buried at Arlington National Cemetery last June.

His wife of 55 years, Carol, his four surviving children and the rest of his family would have watched his casket arrive at the gravesite by horse-drawn caisson with a U.S. Army escort platoon and a military band.

Yet, because of his rank as a private, and in spite of his status as a former POW, Robert Warren Fletcher was denied full military honors at the nation’s largest military cemetery. 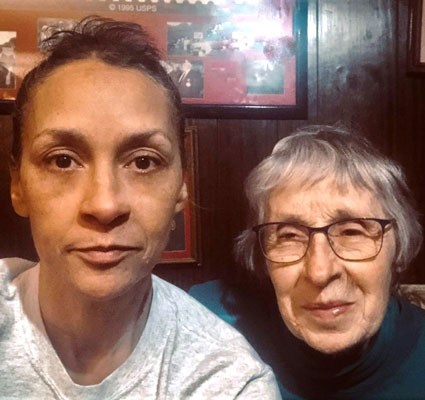 Carol Fletcher, at right, is proud of her daughter Kanda’s persistent legislative advocacy efforts to ensure all former enlisted POWs and Medal of Honor recipients receive burials with full military honors at Arlington National Cemetery, regardless of rank. Kanda is at left. (Photo courtesy of Kanda Fletcher)

“I’m not always one to stop when somebody says ‘no,’ especially when it doesn’t make sense to me,” said Kanda Fletcher, a member of First Presbyterian Church of Ann Arbor, Michigan. “This did not make sense.”

She became convinced that her father’s legacy of advocacy for the rights of prisoners of war and Medal of Honor recipients would continue beyond the grave. She’d be the ‘squeaky wheel’ to get this policy based on rank changed. 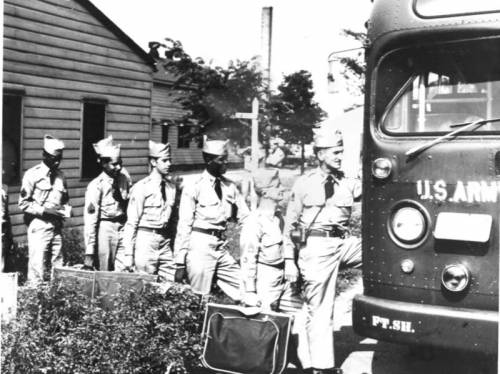 Robert Fletcher, fourth from the left, leaves for basic training in 1950. He served in the U.S. Army during the Korean War, including nearly three years as a prisoner of war. (Photo courtesy of Kanda Fletcher)

Fletcher, lovingly called “Fletch” by friends and family, left high school to join the U.S. Army at age 17. Although President Harry Truman issued an executive order desegregating the U.S. military in July 1948, in May 1950 Fletch was assigned to the 24th Infantry Regiment, a unit of all-black soldiers and all-white officers, Carol Fletcher said. His unit was among the first to enter the Korean War, on July 10, 1950, amid heavy fighting and high casualties. After running out of ammunition and food near the border with China, they were captured by the Chinese on Nov. 27, 1950. During his years of captivity, Fletch experienced physical and psychological abuse. He remained a POW until Aug. 8, 1953.

Robert Fletcher lived a life of service to his country, his family, his church (First Presbyterian Church of Ann Arbor, Michigan) and former prisoners of war. (Photo courtesy of Kanda Fletcher)

Despite suffering from severe post-traumatic stress for the remainder of his life, Fletch found his purpose in helping other POWs get benefits due them. His advocacy work became his post-war mission, his wife said. He also shared his experiences by speaking to school groups and at veterans-related events around the country.

The funeral director explained that Kanda could make a formal appeal to Arlington through her congressional representative, but he warned her that it wouldn’t do any good. She did write an appeal, detailing why she thought her father should receive an exception, but the funeral director was right: The appeal was denied.

In February, the Fletcher family had held a memorial service at First Presbyterian Church of Ann Arbor. They proceeded four months later with military burial honors at Arlington that included a chaplain, folding of and presentation of a U.S. flag and a bugler playing taps.

A family friend, who is also a veteran, thought others should know about the policy. “This is wrong,” said Monica Cash. She suggested Kanda speak with reporter Matthew Burke, a staff writer with Stars and Stripes, an independent military newspaper.

It was Burke’s April 2018 news article about the policy that got the attention of several congressional representatives, including then-Rep. Mike Bishop (R-Michigan) and U.S. Rep. Jimmy Panetta, (D-Calif.), who introduced the Full Military Honors Act of 2018 and the Full Military Honors Act of 2019, respectively. Matthew Manning, legislative director in Panetta’s Washington, D.C., office, complimented Kanda Fletcher on her hard work and advocacy. “She was a fantastic partner on this effort,” Manning said.

“We had to get enough signatures of support from individual representatives before it could move on to the full Congress,” Kanda said. “I would say to Matt Manning, ‘Refresh my memory; I’ve been out of civics for a while. How does this work?’ The support from Representative Panetta’s office was phenomenal; it truly was.”

To garner support for the legislation, Kanda began an intense letter-writing campaign. She devoted several hours each morning to emailing or faxing representatives who had yet to support the pending bill. Since many representatives only want emails from constituents in their legislative districts, fax became an important method of communicating with potential supporters, Kanda said. Last May, she also sent a letter to all members of the House of Representatives from Michigan.

“I said, this is who my dad was. This is what my dad did for his country after being a POW. My dad was very, very proactive in establishing criteria with the Department of Veterans Affairs for service-connected injuries as a member of the Congressional Advisory Board for Former POWs for more than two decades.” It was during this time, she said, that many formerly unrecognized mental and physical health problems resulting from being a POW were reclassified as service-connected disabilities by Congress and the VA.

“This is a nonpartisan issue,” she said. “This has nothing to do with politics or anything like that. This is simply the right thing to do because in this country we claim to love our vets. Well, we need to love our POWs in an extra special way because of what these POWs went through.”

The Full Military Honors Act of 2019 was folded into the National Defense Authorization Act, which President Trump signed into law on Dec. 20, 2019. It gives all former enlisted POWs and Medal of Honor recipients, regardless of rank, the right to burials with full military honors at Arlington. 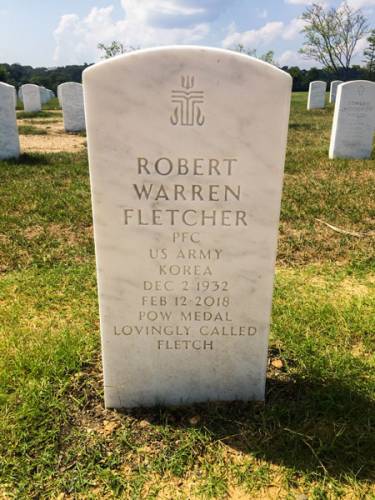 Matt Manning and Matt Burke both gave Kanda Fletcher the good news that her hard work had paid off. She waited until Christmas Day to share the news with her family.

“I am very proud of the work I did and am compelled to continue with now spreading the wonderful news, so all former POWs and their families are aware of burial options, preferably before the former POW passes,” Kanda said.

“That kind of carries on with what her dad did too, because he was all about the POWs getting the benefits that were due them,” Carol Fletcher said. “He went all out contacting the POWs to make sure they knew about their benefits. So, she is just picking up in Dad’s shoes.”

Reporter Matt Burke, who is based at the Stars and Stripes bureau in Okinawa, Japan, said, “Kanda Fletcher watched her beloved father, Robert Fletcher, struggle with the horrors he had experienced during his captivity for his entire life, only to see him denied full military honors at Arlington just because he wasn’t an officer, which often comes down to a college degree. She knew, in cases of extreme valor, a college degree doesn’t make the man, so she fought for dignity in death for the remaining enlisted POWs and MOH recipients who survived their actions and made it home. It was because of her efforts that Congress took notice and this is now the law of the land.”

Burke added, “Kanda deserves all the credit in the world. If she hadn’t been so vocal about this injustice, it [the new law] never would have happened. She is an amazing woman. I can’t help but think that Robert, who worked to better the lives of veterans his entire post-service life, had a hand in this. It is fitting that his daughter was the one to do this for him and for our veterans.”

Of her daughter’s work to change the policy, Carol Fletcher said, “I’m absolutely amazed. Quite frankly, I did not expect she’d be able to pull it off. It just seemed like we ran into so many roadblocks. I think the rest of us in the family had decided that’s the way it was, and she was determined that wasn’t going to be the way it was.”