Share God’s love with our neighbors-in-need around the world through One Great Hour of Sharing. Give now.
Make A Donation Click Here >
Home › Pastor, professor, musician remembered for ‘ushering in a better world’ 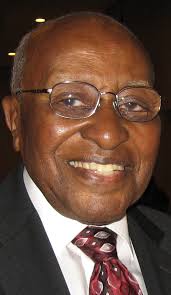 In 1972, Fanniel was called to serve as executive director of the General Assembly Mission Council, the forebear of the Presbyterian Mission Agency.

In an email, Moffett called Fanniel “a friend and mentor who helped shape and nurture me from the inception to the realization of my ministry, which began in Oakland, California. It is ironic that among Leon’s many roles as a pastor, teacher and mid council leader, he also served the same position I now hold in the former United Presbyterian Church in 1972 … I am grateful to God for Leon and a great cloud of witnesses who helped usher in a better world for all people. I was glad to be a part of the celebration of his life.”

Nelson said in an email that Fanniel “served his Lord and Savior Jesus Christ and the Presbyterian Church (U.S.A.). faithfully.” He said that as former GAMC director, Fanniel was “considered a competent and steady leader. His faithfulness to the denomination was also witnessed through his engagement with pastors who sought his counsel as he affectionately and respectfully was called ‘Bishop.’  He was an accomplished musician, pastor and friend who loved our Lord and Savior, Jesus Christ.”

At San Francisco Theological Seminary, Fanniel was a trustee and played an instrumental role in the founding of the Eugene H. Farlough Chair in African American Christianity. The seminary’s dean and vice president of academic affairs, Dr. Jana Childers, said SFTS “will never be finished repaying our debt to Dr. Fanniel. Few have done more to broaden and deepen the work of the seminary. And very few have done such work with the kind of remarkable humility and grace Leon showed. He was a quiet powerhouse.”

Music was close to Fanniel’s heart from a young age. He taught himself to read music and play the piano, receiving in 2014 the Heritage Award for Musical Excellence by the National Association of Negro Musicians. Well beyond his 1997 retirement, he enjoyed worshiping and playing piano at Westminster Presbyterian Church.

Fanniel was pastor emeritus of St. Paul’s Presbyterian Church in Los Angeles, which he served for 21 years. He was a graduate of Lincoln High School in Kansas City; Huston-Tillotson College (now University) in Austin, Texas; McCormick Theological Seminary in Chicago; and San Francisco Theological Seminary in San Anselmo, Calif.

In addition to GMAC director and pastor, he was a synod executive and SFTS professor who served on numerous boards and commissions, both with the PC(U.S.A.) and ecumenically. In 2011 he became a resident of Monte Vista Grove Homes in Pasadena, Calif., where he was the first resident to become chairman of the board.

His longtime friend and colleague, the Rev. Dr. Charles Marks, chaplain at New Theological Seminary of the West, said this: “Leon was a faithful and caring servant in all seasons and among all people. If the Presbyterian Church (U.S.A.) acknowledged saints, he would be one of them.”