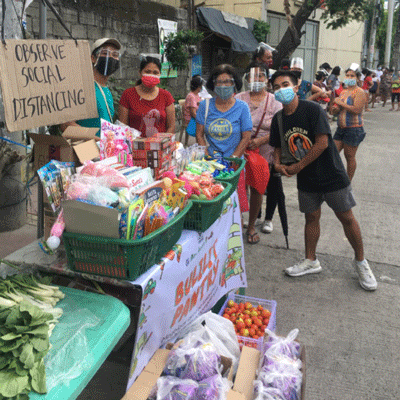 LOUISVILLE — As in many other places in the world, the global pandemic has pushed millions of Filipinos and their children further into poverty. But a global partner of the Presbyterian Church (U.S.A.), the United Church of Christ in the Philippines (UCCP), has responded in creative ways not only to feed the children’s bodies but to deal with their psychosocial needs as well.

As part of the partnership with the UCCP, PC(USA) mission co-worker Juan Lopez has been working with an organization that defends children’s rights. Lopez facilitates trainings for staff and volunteers of the Children’s Rehabilitation Center (CRC). During the pandemic CRC continued its outreach to children with the Bulilit Pantry.

Lopez talked with Kim Vinzar Samania, who serves as deputy director and social worker for CRC. He said UCCP is an important partner in protecting children. In a recent chat with Lopez, he said, “The UCCP churches have been long-time CRC partners in defending children’s rights. Different activities include hosting discussions or seminars about children’s rights, how to help communities, and how the Church can respond to the psychosocial needs of the children in the community.”

Samania said the first community food pantry was in Maginhawa, which started a movement. CRC’s “Children of the Storm” team already had the idea of making the community pantry inclusive of children but took it further. “What if we could put a Bulilit (“undersized”) pantry so the community could also help the children?”

The team decided to create a small pantry to give books, toys and coloring books to children to feed education and creativity, not just tummies. 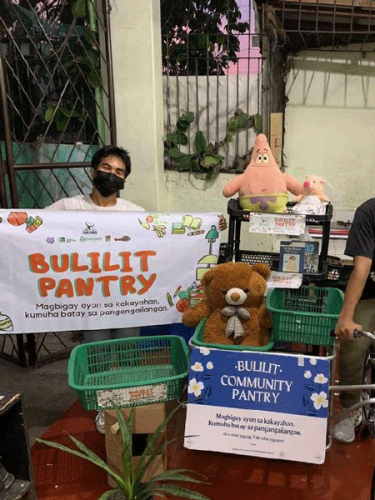 The Bulilit (“undersized”) pantry makes available supplies to children that feed their tummies as well as their spirits. (Photo courtesy of the Children’s Rehabilitation Center)

The Children of the Storm task force is a consortium of five different child-focused organizations: Children’s Rehabilitation Center (CRC)’s Salinlahi (“generation”), Alliance for Children’s Concerns, Association for the Rights of the Children Southeast Asia, Batibot Early Learning Center, and Parents Alternative on Early Childhood Care and Development Inc. The consortium was formed in response to the devastation caused by Typhoon Ondoy. It has been responding since then to typhoons, floods, and other calamities in the Philippines, providing relief efforts for children.

Getting supplies to the children presents challenges. Children are not allowed to line up at the pantry because of health protocols, so parents come on behalf of their children. The organization also purchased a large tricycle for door-to-door deliveries.

The Anti-Terrorism Act, enacted on July 3, 2020, by President Rodrigo Duterte, has complicated the ability of many organizations to provide aid to the people of the Philippines because it allows the government to broadly define terrorism to include anyone who speaks against the government.

The law says that “persons who propose, incite, conspire, and participate in the planning, training, and facilitation an offense under the act, as well as those who provide support to ‘terrorists’ as defined under the act, or recruit members of a ‘terrorist organization’” could face life imprisonment without parole.

“The pantry initiative inspired people from all across the country, despite the pushback from the authorities,” said Lopez. “Most of the neighborhoods had a temporary pantry to answer to the need of the most vulnerable. Most of them had quotes from the Bible to show that it was about compassion and care, and no law could stop that.”

Even before the food pantry began operation, CRC and its partners were very vocal about their opposition to the law’s vague definition of terrorism.

“The CRC has been a victim of public vilification, red-tagging perpetrated by the state,” said Samania. “During the pandemic, the CRC had to delay their distribution of goods because of the threats and difficulty to travel due to the pandemic restrictions. At the beginning of the pantry movement, the National Task Force to End Local Communist Armed Conflict already released statements tagging the organizers of the community pantry in Maginhawa as terrorists and communist pawns. They said that those pantries were led by the Communist Party, because they were too well organized to be coming only from regular citizens.” 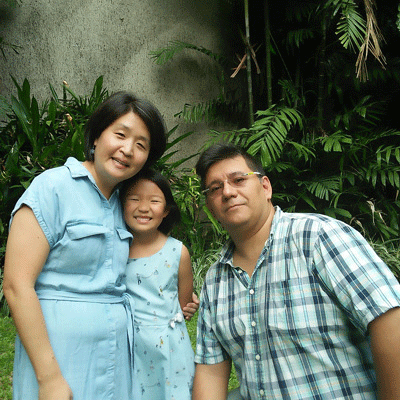 The Chang Lopez family on a visit to the National City of Quezon City before the pandemic. (Photo by the Presbyterian Mission Agency)

He said many community organizers have stopped providing help because of the threats.

“This pandemic impacts the body, mind, cognitive skills, education, development and mental health of the children,” he said. “The economic situation caused some families to engage in dangerous activities that threaten the welfare and rights of the children.”

Samania says there has been an increase in gender-based and domestic violence, as well as an exponential increase in sexual exploitation of the children. The structure was not in place for online learning, and many did not have access to computers. This has added to the impacts on the mental health of children.