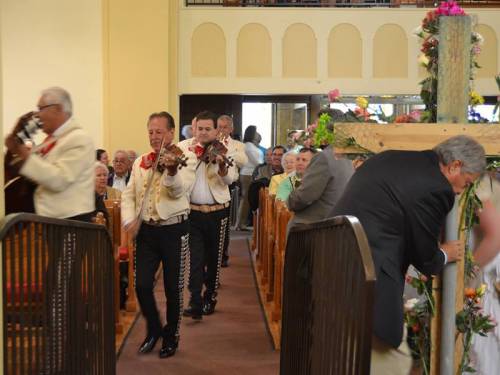 LOUISVILLE — Second Presbyterian Church in Albuquerque, N.M., the 100th church to accept the Matthew 25 invitation, is a bilingual and multicultural church that, among many other outreach services, provides transitional housing to transgender women seeking asylum in the U.S.

And yet, says the church’s 15-year pastor, the Rev. Dr. Robert Woodruff, Second Church continues to engage the community and the region for new opportunities to do ministry.

“It’s a wonderful, welcoming church,” Woodruff said a day after the session voted to accept the invitation. “We don’t identify ourselves as a progressive church — it’s more of a family metaphor, one that welcomes and supports people.”

“I do credit the church for doing more things outwardly in the community,” he said. “Sometimes communities of faith don’t realize what they’re capable of doing. You do something, and it has a snowball effect.”

When presented with an idea for a new initiative a dozen years ago, “the session might have said, ‘No, we can’t,’” he said. “Now it’s, ‘Yes, and …,’ a little like improvisation.”

One example: since January, the 250-member church has been using an apartment over its education wing to house transgender women seeking asylum in the United States and awaiting a sponsor. A federal detention center is about an hour west of Albuquerque.

“We are quite concerned about immigration issues, because they affect people we know personally,” said Don Bixby, a ruling elder at Second. “Transgender women have been difficult to place in the immigration system. They’ve been subject to horrific abuse on the journey and before that. They were getting dumped off in town with no place to go and no resources. This is a temporary place for them while are waiting for a sponsor.”

When it was time for the session to discern this week whether to accept the Matthew 25 invitation, Bixby said two elders wondered, “What is the point of declaring this? We’re already doing it.”

“The answer was that this is a good example to other churches,” he said. “There are so many people in need — with all kinds of needs — that it is our responsibility to reach out to them in whatever way we can.”

The Rev. Dr. Diane Moffett, president and executive director of the Presbyterian Mission Agency, also picked up on the role of Mathew 25 churches sharing their stories with other congregations considering the invitation.

“It is exciting to watch congregations live out their faith by committing to become a Matthew 25 church,” she said. “The first 100 pledges have been made. We look forward to hearing and seeing how those congregations discover new passions and vitality and be re-energized as disciples of Christ. They will serve as inspiration to the next 100 and the next 1,000.”

George Huggins, who chairs Second Church’s LiveWire Committee, which handles church communications, said if the church has a long-range mission plan, he’s not aware of it.

“When we were asked to host twice-monthly meetings of a prison ministry, we did,” he wrote in an email. “When we were approached to rent space to host a homeless family ministry, we did. We’ve been participating in a regular homeless feeding ministry for several years … We’re not a rich congregation, but we are amazed at the generous response that we have seen.”

Second Church may be 130 years old, said Sharon Yates, administrator of the Presbytery of Santa Fe, but it’s showing no signs of slowing down.

“The church continues to lead by example in helping out our immigrant new faith community, welcoming asylees and leading the way in the Presbytery of Santa Fe in repudiating the Doctrine of Discovery,” she wrote in an email. “It is a joy to watch how Second continues to serve the community and the stranger in our midst with energy, imagination, intelligence and love.”