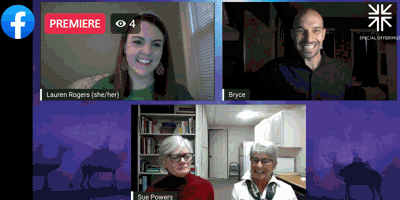 LOUISVILLE — For its final broadcast of 2021, Between Two Pulpits brings viewers up to date on a Minnesota congregation’s innovative — and productive — Alternative Christmas Marketplace. Read about Oak Grove Presbyterian Church’s previous support for the Presbyterian Giving Catalog here. Watch the edition of Between Two Pulpits, hosted each week by Special Offerings’ Bryce Wiebe and Lauren Rogers, here.

“Our favorite guests!” Wiebe told Oak Grove members Sara Egan and Sue Powers as they were introduced. “The creative folks out in congregations.”

Last year during Advent, Oak Grove’s Mission Committee determined the popular Alternative Christmas Marketplace, held to support organizations outside the committee’s scope, would have to be held through the mail rather than in person owing to pandemic precautions. Packets describing giving opportunities — many of them taken from the Presbyterian Giving Catalog — were mailed to each of the church’s 365 or so households. In 2020, the committee raised about twice what previous in-person events had garnered.

Oak Grove is still not holding in-person worship, and so a similar tack was employed this Advent season. The 2021 event raised $18,651, with more than $8,700 going to Special Offerings and the Presbyterian Giving Catalog.

“It was amazing,” Egan told Wiebe and Rogers. “Sue and I would open the envelopes [sent in by Oak Grove members and friends] and be thrilled by people’s imaginations.”

“I think COVID has been a wakeup call for a lot of us,” Egan said. “Life is precious. We think there is a tremendous feeling [within the Bloomington, Minnesota congregation] that you want to do something for somebody else. That’s my take on it.”

“If you did a survey of our congregation,” Powers said, “the thing they would say they love the most [about the church] is the music and the mission.”

“We too often forget,” Wiebe said, “that mission and ministry are where we learn as much about theology as anywhere else. What we have seen as a Church is when we are willing to make a commitment, to put ourselves out there and to ask, the Spirit does prompt us still. There are plenty of people who see the needs that are out there, but it is a far different thing to put in the work.”

“The world changes,” Wiebe added, “because people are willing to make copies and stuff envelopes and put them in the mail.”

“There are a lot of feelings about immigration,” Powers said. “But every [immigrant] has been invited to come to the United States by our government. They are well vetted before they come here.” 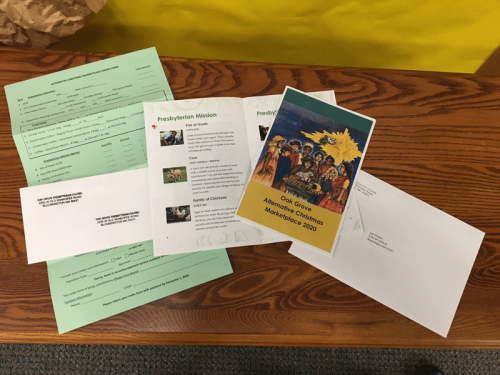 In this year’s packet, the Oak Grove church included a page offering ways to support the Afghan family the church plans to help settle into the community. “We’re just getting started,” Powers said.

Even though Oak Grove Presbyterian Church continues to worship online, a handful of events are occurring in person. One recently, the Carols, Cookies and Care! gathering, was held one Saturday during Advent in the parking lot topped by 14 inches of fresh-fallen snow.

“The idea was to sing carols around a fire and have hot chocolate and coffee, and people would bring cookies to share,” Powers said. The church’s Supportive Housing Sub-Committee asked participants to also bring toilet paper, diapers and wipes to be taken to a food distribution site. Hearty church members donated enough to fill two vehicles.

“The kids came, and it was amazing,” Powers said. Agape bags full of socks, bottles of water, gloves, handwarmers — and a few five-dollar bills — were distributed to carolers so they’d have something to give people asking for a donation along Bloomington roadways.

Rogers told the guests they were “leaning in to our 2022 theme of connection. Through everything you are doing you are connecting to one another and to all the people you are serving.”

“We are only the church,” Wiebe said, “if we are the church together.”

While Oak Grove Presbyterian Church plans to hold its 2022 Alternative Christmas Marketplace in person on the first Sunday in December — providing, of course, the pandemic has eased by then — Mission Committee members will nonetheless also make up packets to be distributed to every church family in advance of the event.

“It has started a tremendous dialogue between parents and children,” Egan said. “We got a lot of feedback from the congregation that people loved having this packet to take home and sit down with their family and say, ‘What would be a meaningful gift our family could give?’ In a quiet moment, families could choose some things that would be truly meaningful for them.”