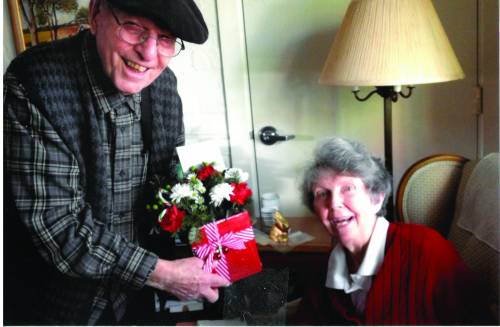 LOUISVILLE — The love story between Ralph and Mary Hamburger began at a Presbyterian church when Ralph introduced himself to Mary after hearing her play the piano.

Their time together on Earth ended at a Presbyterian retirement community late last summer after 65 years of marriage.

The couple spent several good years together in the independent living facilities of Monte Vista Groves Home, a multi-level care senior community in Pasadena, California. However, Mary’s deteriorating health demanded that she move to the skilled nursing unit. Four years of paying for this level of care nearly depleted the couple’s savings, and Ralph worried about what would happen next.

Thanks to Christmas Joy Offering gifts, Ralph and Mary could continue living at Monte Vista Grove. Ralph said he felt “the arms of the church around us making our lives more comfortable at the end.”

The Hamburgers’ story is the saga of two people from diverse backgrounds who were bound together by love for one another and a common devotion to their Christian faith. Ralph, a member of the Dutch resistance during World War II, spent the war years hiding Jews from the Nazi occupiers. At the war’s end, he came to the United States carrying a permanent entry visa in the pocket of a suit that he had received in a CARE package from the U.S. He entered as a stateless person because his citizenship in Germany, the country of his birth, was revoked by the Nazi regime.

Ralph made his home in California, where his U.S. sponsors lived, and found his way to Hollywood Presbyterian Church.  There he met “college students and other young people who exhibited such faith and joy,” he said.  It was a time of spiritual transformation for Ralph, which led to his call to ministry.

Mary, a native of Kentucky’s Appalachian region, was part of the large post-war migration to California, where her brother had lived while serving in the Navy.  She graduated from college on the West Coast, started a career as an accountant, and became involved in the Hollywood church’s thriving young adult ministries.

The couple considered their relationship simply a friendship until they “unexpectedly fell in love,” Ralph says.  During their life together, Ralph completed seminary, served congregations on the East Coast and West Coast, and then took a call in Europe.

Ralph’s service in Europe was behind the Iron Curtain among Christians who were seeking to live faithfully under authoritarian regimes.  He encouraged church leaders, arranged continuing education for pastors, and facilitated the printing of Bibles and Christian literature. Mary supported Ralph in his peripatetic ministry, managed their home, and cared for their daughter, Rachel, who is now a PC(USA) pastor.

“I am just an average, ordinary C+ person who became a pastor,” he said.  However, he added that “God touched me, tutored me and opened doors for me and others to do things that were absolutely impossible in communist nations during the Cold War.”

Ralph was grateful that his wife is getting good care, and he was thankful for gifts to the Christmas Joy Offering that help make this possible. “It is wonderful that the church does not forget those who worked in Presbyterian ministries at home and abroad,” he said.

Half of the Christmas Joy Offering goes to the Assistance Program of the Board of Pensions to help current and past church workers and their families who are in financial need. The other half supports future leaders who attend Presbyterian-related schools and colleges equipping communities of color. Most congregations receive the offering during the Advent and Christmas seasons.