Women leading movements for positive change will be honored this fall 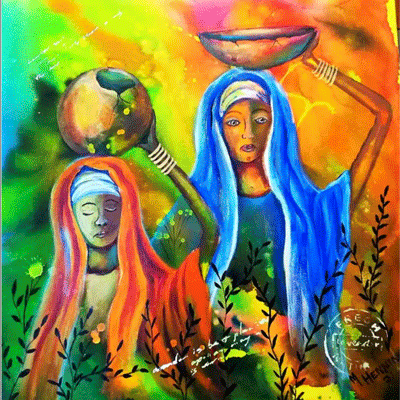 Ruth and Naomi by Marietjie Henning, South Africa. (Used with permission of the artist)

LOUISVILLE — Although there won’t be a Women of Faith Breakfast during the 225th General Assembly of the Presbyterian Church (U.S.A.), the tradition of giving out awards to extraordinary women continues in a different way, culminating with a virtual celebration this fall.

In preparation for that event, Racial Equity & Women’s Intercultural Ministries and Presbyterian Women are seeking nominations for the Women of Faith Awards, which honor women who show their Christian commitment through witness, service and leadership.

“This year our theme is Women Leading Movements for Positive Change,” said Jewel McRae, Coordinator for Women’s Leadership Development and Young Women’s Ministries for the Presbyterian Mission Agency. “We’re looking for women of faith who have overcome adversity and challenges … and have made positive changes in their ministry and in the communities they serve.

The guiding Scripture is Ruth 1:16, which was chosen because of the relationship between Naomi and Ruth who worked together to create positive change.

July 22 is the deadline to nominate women who have shown that same kind of determination and are making a difference on issues such as the Covid pandemic, climate change, and race and gender justice.

Normally, winners are honored during a breakfast at GA, but that won’t happen this year because of the nature of the General Assembly, which is being held as a hybrid event, partially online and partially in person in Louisville.

Women of Faith award winners will be honored during a virtual celebration in November after nominations are reviewed by a committee and the preferred candidates are presented to the Presbyterian Mission Agency Board in September.

“Racial Equity & Women’s Intercultural Ministries — in partnership with Presbyterian Women, Inc. — has been honoring and recognizing Women of Faith for almost two decades and we felt it was important to keep this legacy ongoing,” McRae said.

To nominate someone, use the online form or request one from Janelle Baker. Return forms by July 22 to Janelle Baker, Presbyterian Church (U.S.A.), 100 Witherspoon St., Louisville, KY 40202-1396.