Register today for the June 23 (2pm EDT) online Matthew 25 event that will look at hunger and food insecurities.
Make A Donation Click Here >
Home › ‘No Longer Shall They Teach One Another: The End of Theological Education’ 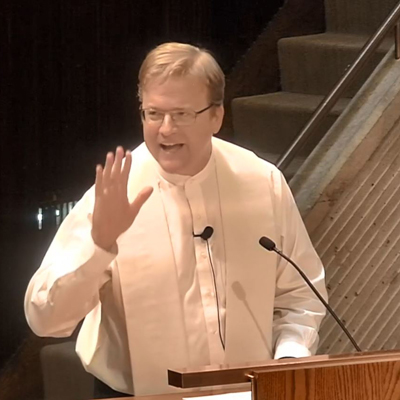 LOUISVILLE — The Rev. Dr. Ted A. Smith, Professor of Preaching and Ethics in the Candler School of Theology at Emory University in Atlanta, presented the fourth and final 2021 Sprunt Lecture Wednesday, hosted by Union Presbyterian Seminary. The final virtual lecture was followed by a Q&A session on the overall lecture theme “No Longer Shall they Teach One Another: The End of Theological Education.”

The four lectures in the series were recorded and covered the topics of “Consolidation” (coming together), “Dispossession” (unraveling, unwinding), “Renunciations,” (telling the truth about that unraveling, letting go of what is already lost) and “Affordances” (things that are illumined in a world by God’s grace). Reports on Smith’s previous talks are here and here.

“Affordances are what arise in the wake of a redemption that is both ‘now’ and ‘not yet,’” said Smith. “They are what comes after the end in the middle. They are what we can grasp hold of when we renounce our hold on the powers and principalities.”

Instead, Smith describes affordances as “the contours of the social landscape as illumined by grace.” What matters, he said, is “what we make of them, what God sees in them.” They have an objective quality, but also a subjective quality — appearing as affordances from a particular angle of vision. They “invite” but they do not determine the response or the use.

“In pointing to affordances, I don’t play the role of a consultant suggesting a blueprint for the future of theological education. And, I don’t claim to have seen the future or to stand above time to offer a timeless ideal,” Smith said. “Instead, I want to position myself as what I am: a fellow disciple on the road with you and we trust with Jesus between the times, trying to see the world as it is illumined by grace, and inviting you even as you invite me to discern brave and faithful ways forward.”

In the second lecture Smith described how processes of individualization unmade “ascribed” identities, those identities that are assigned to us, which creates pressure for an achieved identity. “It can’t be just any ‘achieved’ identity,” he said. “You can’t just make any identity under the ethos in which we swim now. It needs to be an identity that is authentic to you — the one that is a real expression of you.”

He said, “Today, we all have pressed upon us [the late American poet] Mary Oliver’s question: ‘What is it you plan to do with your one wild and precious life?’”

Smith thinks the urgency of authenticity is an important affordance for theological education; he describes it as “a powerful river that is just rushing through our culture.” If we try to swim against it, we might be able to do it with enough power, enough money. “If we go with it, things might happen, which doesn’t mean we can ride it uncritically.”

The Rev. Melanie C. Jones, assistant professor of ethics, theology and culture and the director of the Katie Geneva Cannon Center for Womanist Leadership at Union Presbyterian Seminary, served as host and moderator of the post-lecture question and answer session with the Rev. Dr. Ted A. Smith for the 2021 Sprunt Lectures. 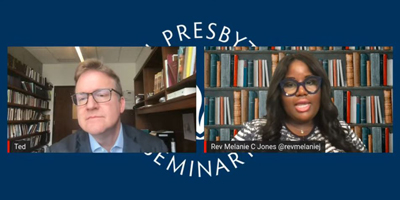 Jones remembers hearing a guest lecture given by Smith in her New Testament class on Jewish-Christian relations with Dr. Amy-Jill Levine at Vanderbilt Divinity School, then again in Dr. Victor Anderson’s graduate seminar Methods in Ethics for budding ethicists.

“The gift of this 2021 Sprunt Lectures is being able to see and to hear a wise teacher and courageous thinker who disrupts theological education as usual for these times,” Jones said. The annual Sprunt Lectures are hosted by the Alumni Office and the Ethics Department of Union Presbyterian Seminary.

Are you calling theological education to a deeper imagination that also informs spiritual formation?

The vision that we got, especially from Judith Butler and Bell Hooks, about ‘giving an account of oneself,’ part of what that involves is tracing patterns of domination, right? There is no way to ‘do spirituality,’ to do that inner work of authenticity that isn’t also leading us outward into social analysis. I think that’s an organic way to hold those two things together. I think it is also the case that authenticity is often going to be produced in the struggle, right? It’s not produced simply by pulling back into oneself. It’s produced in the work of the struggle — that’s the forge of authenticity.

You mention community organizing as something the seminary can teach and practice —can you expand on this?

Part of it is that we teach students these skills, right, or partner with people who can. So it’s part of our professional formation. That’s the obvious way, and that’s the way that it’s most adjacent to the old professional model. ‘Oh, community organizing is the new profession; now we’ll teach people to be community organizers, like we taught them to be pastors.’ That’s a start, but I think the deeper turn is to think about the seminary as a place that could itself be a hub for community organizing. So more like the Highlander Center, where we don’t just train the professionals who go out and do it, but this is the place where people who are in the movements come to reflect, to think about the meaning of what they’re doing, the strategy of what they’re doing. Organizing takes space. It has to happen somewhere. Why not the space of a seminary campus? And the other thing I would say is, if you really break with the professional model, then you’re not just going to be training ‘the community organizer’ to go do this. You might be training people in congregations to do community organizing, just as part of their walk with Jesus. Like that’s just part of their lay discipleship, right?

What in your view is the relation between the search for authenticity and the human response to the presence of the image of God within us?

I think that sometimes [when we talk about] the image of God, when we talk about the Imago, we imagine it as this little static ship or some little something that is in us. And then, what authenticity would be, may be expressing that fully or responding to it faithfully. I think what that misses is the relational nature of the Imago, right? It’s not a static ‘thing’ that is within us. It is a relationship that is so powerful that it makes us who we are and stamps us, in a way, with the love of God. That we’re all walking around with Grace on our face, right, because of the way God’s love has marked us.

​What importance does mission (local, national and international mission) play, or will play, in churches discovering their authenticity, particularly in the small church?

The work of authenticity is learning to give an account of ourselves, individually and collectively. Then it’s going to lead us into social analysis. It’s going to lead us into engagement with the community. That’s part of what’s going to happen. So that’s one place that this drive for authenticity leads us into mission. A second connection between the drive to authenticity, the ‘urgency of authenticity’ and mission, is in what I was talking about ‘new solidarities.’ What would it be like for Presbyterians, who are kind of, you know, the professional managerial class at prayer, what would it be like for us to not go into mission with that professional ethos as ‘the ones who know,’ and not even as the ones who benevolently and, in an enlightened way, ‘want to learn.’ But what would it be like for us to go into that space as poor ourselves, as precarious ourselves, as aware of that precarity that is, in fact, actually present? That, I think, can transform mission. We can’t think about the urgency of authenticity just leading us to retreats where we talk only to ourselves. Authenticity is going to come — it’s going to come — as we pursue, as we turn to God and as we seek God’s work in the world. So, mission is going to be where authenticity sneaks up on us, comes to us.

​How do you see the reconfiguration of the traditional disciplines of biblical, theological, historical and practical studies within a non-professionalized model?

That is a huge question. That fourfold division of theological study is just baked into the structure of almost every theological school in North America, and it fits perfectly with the ‘professional model,’ right? You do the Bible, you do the theology, you do some history and then you learn how to apply it in the practical studies side. That actually may be one of the hardest things to move beyond because of how deeply ingrained in our institutional life it is and because how conservative we faculty members are about these things. But I also see individual lives that are already transgressing these boundaries all over the place. And I think that’s probably what’s going to happen is that the leading people in each of these fields are just going to be working across them, and eventually the differences aren’t going to make as much sense. With that said, I think the fourfold division and the guilds, they do create a kind of knowledge. I’m not at all against that. They sustain it. What could come next, I genuinely don’t know. I’ve thought about this and I could give you some tries at answers, but I don’t know. So if any of you have an idea for what could succeed the fourfold old format, I’m ready to hear it. I think really what I’m after is a reorientation of each of those fields away from ‘Will it preach?’ (the professional ideal) and toward ‘What does it mean for me? For us?’ (toward that urgency of authenticity)

In relation to the idea of theological education being rooted in “cathedrals” or “village parishes” and such, does such centering risk reproducing the biases (racism, misogyny, homophobia, etc.) found in some churches?

Sometimes you have a kind of internalized discrimination in those places, and sometimes you have, which is related but is a separate thing, just the intense segregation of congregational life that persists in America. I think sometimes in theological schools we sell ourselves short, especially in relation to congregations. It’s like that’s where all the resources are, that’s where the real thing happens. Congregations in these village or cathedral models would have something to offer to a theological school that was their hub, but the school would also have something to offer those places, to those congregations. I think it’s a different ethos. It’s different bodies on the teachers and leaders who are going to be going to those spaces, teaching in those spaces. It’s also connections with congregations of people who are different. So, the school can do some things to break those things up. I think we have to be intentional about that as being part of our vocation in partnering with those communities.

To learn more about Theological Education Between the Times resources, visit tebt.candler.emory.edu.

If you missed the 2021 Sprunt Lectures or would like to watch again, use these links:

Mark your calendar for next year’s Sprunt Lectures at Union Presbyterian Seminary, May 2-4, 2022. The lecturer will be the Rev. Dr. Wil Gafney, an Episcopal priest, author and professor of Hebrew Bible at Brite Divinity School in Fort Worth, Texas. More information will be available closer to the event at upsem.edu.