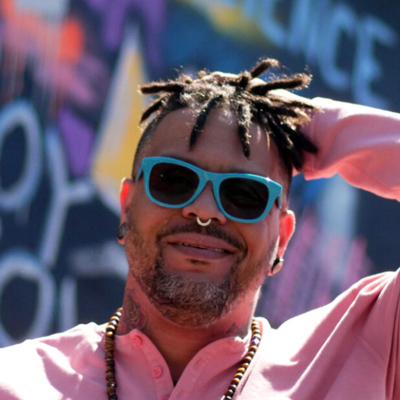 LOUISVILLE — The Rev. Lenny Duncan, who delivered a powerful and at times anguished and angry keynote Friday during the NEXT Church national gathering, said he agreed to speak because the Rev. Denise Anderson asked him to.

Anderson is the coordinator for racial and intercultural justice for the Presbyterian Mission Agency.

“A Black woman whom I respect asked me to do it,” Duncan said, wondering out loud about her title, “coordinator.”

“A Black woman tasked with that work?” he said. “Anytime I’m asked, I try to show up to the best of my ability.”

The theme for this year’s national gathering is “Breaking, Blessing, Building.” “It seems like that’s all that’s been happening,” Duncan said. “When will the breaking stop? When will the building begin? When can I lean into a blessing?”

Duncan, a pastor with the Evangelical Lutheran Church in America, is the author of “Dear Church: A Love Letter from a Black Preacher to the Whitest Denomination in the U.S.” and the forthcoming “United States of Grace.” He described his work as “disturbing the waters and getting to greater questions about who we are as a republic.”

“Radical evil” is “marching through the land, doing whatever it wants with us,” he said.

He began to cry talking about how he would have loved “knowing who Michael Brown was growing up to be.”

Jesus didn’t have to die, Duncan asserted. “What we see in the gospels is more a reflection of who we are as humanity than it is about God’s will for us,” Duncan said. He asked participants if they’re willing “to let go of lifelong theological convictions” to wonder “can the [shedding of] Black blood stop, Indigenous blood stop, queer blood stop? Ask yourself: Did Jesus have to die, or is that just who we are? If we followed how he lived, would we end up in a different position than he did, or in the same position?”

He thinks about the killings of Emmett Till, Sandra Bland, Trayvon Martin and George Floyd. When he does, he cries even louder. “When I lift them up and show you the tears, it lets you know the voice of God is broken and the heart of God is strained, that the eyes of God are upon you,” he said. “I truly believe this is a crucial juncture in salvation history. All our worlds are being rearranged. There’s been some sort of spiritual awakening no one is talking about because we are all separate.”

“But we know we aren’t coming back to the same place,” Duncan said. “This pandemic thing is not going to go away for a while … This was not the kin-dom we were supposed to inherit this year, but it’s the one we have.”

Jesus, Till, Floyd and the others didn’t die “to get you to wake up,” he said. “I don’t believe blood was necessary. We worship a God who steps into human history for the express purpose of salvation.”

That inbreaking, he said, is called collective liberation.

At the height of his powers in 1964, the Rev. Dr. Martin Luther King Jr. had the support of 38% of Americans, the same support given to the Black Lives Matter movement, according to Duncan. “Don’t believe you would have been out there with King,” Duncan said. “Don’t be telling yourself lies.” Whatever pastors and other church leaders did to support protestors last summer “is what you would have done at the height of the civil rights era … If that disturbs you, that’s not a bad thing. It gives you the chance to work through the uncomfortability about what you can do to dismantle white supremacy.”

“If you want to see the kin-dom of God inbreak into this country,” Duncan said, “we’ve got to do it wholeheartedly.”

Floyd’s death, Duncan said, brought about two reactions in the Christian community: waging peace and building peace. Those who waged peace went straight to the frontlines of protest and supported those so engaged. Those building peace held a book study at church, he said.

“That’s OK. You’re in the educational stage,” Duncan said. “You’re going to lose some people and a chunk of your money, so start budgeting ahead … These are tough times; let’s not forget that. But let’s also remember we have an incredible opportunity.”

Duncan said he doesn’t believe in total depravity, “and I’m not sure I believe in original sin. We live in a broken world, but people are inherently good. What I focus on is how … we can save each other and help each other.”

Duncan called it “a true honor” to speak to the group in a message he recorded last month. “These are tough times, but I try to show up with all the authority I’ve got. Y’all deserve it. I’ll see you soon.”