LOUISVILLE – At the direction of the 221st General Assembly (2014) the Presbyterian Church (U.S.A.) Office of Public Witness created a discussion and study guide titled, We Shall Not Be Moved – Advocacy in the New Age of Voter Suppression. The document, released today, provides individuals, church groups or classes, and pastors a resource to explore the history and context of systemic patterns of voter suppression in the U.S. It draws on U.S. history, Presbyterian social witness policies, Scripture, and other resources to provide a template for reflection and action by focusing on the recognition that minority groups do not always enjoy full voting rights in our society.

In 2013, the Supreme Court ruled that a coverage formula in the original, historic 1965 Voting Rights Act was unconstitutional because it was outdated. This provision required jurisdictions that had a history of voter suppression—those that primarily restricted the voting rights of African Americans—submit new or proposed voting laws to the federal government for review. By striking down that provision as unconstitutional, the court suspended the Feds’ ability to protect minority voting rights.

“We hope this resource will inspire Presbyterians to expand the work for racial justice, especially when they go to the polls to cast their vote,” said Nora Leccese, associate for domestic policy at the Office of Public Witness. 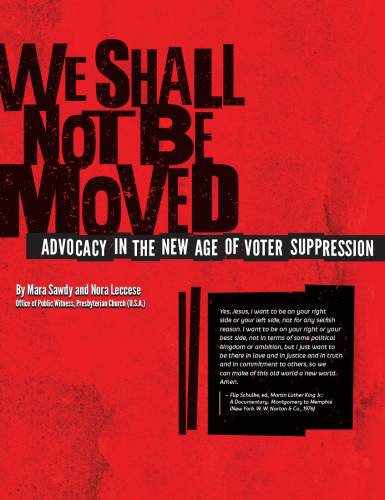 Presbyterian commitment to civil rights for minorities at the polls pre-dates the PC(USA) itself. In 1956 the United Presbyterian Church U.S.A. called upon Christians to eliminate poll taxes and other restrictions preventing citizens from exercising their legal rights at the polls. As outlined in the discussion guide, some of the current tactics attributed to voter suppression include photo ID requirements, reducing the length of early voting periods, name matching, purging voter rolls, and limiting voter registration.

“We suggest Presbyterians volunteer as poll watchers, voter registration helpers, or transportation providers to the polls for members of their congregation,” says Leccese, who also co-authored the discussion guide. “We also introduce readers to organizations challenging racial discrimination in the political process.”

Currently there are two proposals under consideration by Congress to improve voting rights. The Voting Rights Advancement Act, sponsored and backed primarily by Democrats in the House and Senate, would require states with recent voting rights violations be subject to federal review. It would also require jurisdictions to provide public notice of any changes within 180 days of an election, protect voters from changes likely to discriminate against people of color and language minorities, expand the ability of the attorney general to send federal workers to observe jurisdictions, and offer greater access to voter registration and voting on and off Native American reservations.

Introduced into the House of Representatives and enjoying some bi-partisan support is the Voting Rights Amendment Act. It allows a federal court to determine which states would be subject to federal review, and requires any state with five voting rights violations within 15 years be subject to having their voting laws submitted for review before passage. It would also require all states and counties to provide public notice of certain changes, such as redistricting, and allows the court to block changes pending federal review.

We Shall Not Be Moved compares each piece of legislation, and offers an extensive list of resources for advocacy and building momentum to ensure every voice can be heard through an individual’s vote. It can be downloaded from the Office of Public Witness web page; to inquire about print copies contact Nora Leccese in the Office of Public Witness at nora.leccese@pcusa.org.