Share God’s love with our neighbors-in-need around the world through One Great Hour of Sharing.
Make A Donation Click Here >
Home › Neo-populism fans out across Europe 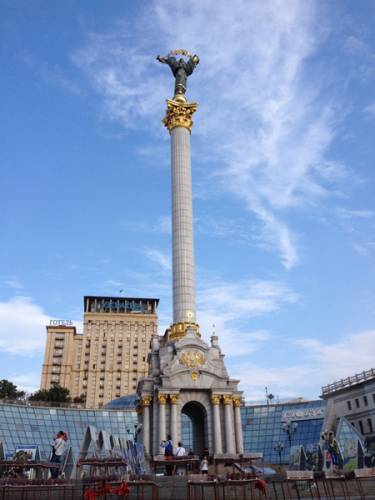 Maidan Square, where the Revolution of Dignity took place in February 2014, when a series of violent events in the capital, Kyiv, culminated in the ousting of the elected Ukrainian President Viktor Yanukovych and the overthrow of the Ukrainian government. (Photo by Ellen Smith)

LOUISVILLE — The rise of neo-populism across Europe and the Church’s role in confronting it were at the heart of a webinar Thursday sponsored by World Mission’s Office of the Middle East and Europe.

Rev. Michal Jablonski of the Reformed Church in Poland, a Presbyterian Church (U.S.A.) partner, who’s a senior pastor of the Reformed congregation in Warsaw and a member of the Polish Council for Christians and Jews, told participants that Poland is moving toward authoritarianism and a revolution aimed at destroying liberal democracy.

“Populism is just a new version of old fears,” he said. “After half a century of communism, after regaining freedom in 1989, joining NATO and the European Union, does totalitarianism reign again in Poland? My opinion, actually the opinion of about half our nation of 20 million people, is that it does. Its fuel is antagonism and enemies. Without enemies there is no politics. Refugees are being threatened and the old demon of anti-Semitism is being awakened.”

Jablonski said the nation’s collective memory is being manipulated and history is being rewritten. Resentment is growing against Poland’s neighbors, including Germany, Russia, Ukraine and the Czech Republic.

“At this moment, the pendulum of history is swinging extremely to the right in many countries around the world, if not everywhere,” he said. “For example, in the USA, which is perceived in Poland as flowing with milk and honey and is the motherland of modern democracy, one can clearly see an unequal distribution of wealth, of growing poverty zones, and futile waiting for help. Africa, exploited and colonized by rich countries, is crying out for help and is sending hundreds of thousands of its inhabitants to Europe. Europe is afraid of losing its status and uses all the tried and tested old demons.”

Debora Spini, a Waldensian (a PC[USA] global partner church) lay person and professor of political theory and social philosophy who teaches at New York University in Shanghai, discussed the role of religious groups in the public sphere and secularization.

“Churches have a unique contribution to give, as they can focus on the core of the Christian message,” Spini said. “A constant critical attention is needed to identify the profound differences between the phony operations of political theology typical of neo-authoritarian and ethno-centricist populism and the genuine proclamation of the Kingdom of God that engages with the historical conditions and yet cannot be assimilated and appropriated by any political project.”

“A focus on the dogmatic parts of Christianity would be the best antidote against any distortion of religion and help unravel the profound differences between this kind of phony operation of political theology and instead the proclamation of Kingdom of God that cannot be assimilated with any political projects,” she said.

Sergii Bortnyk, a theology professor at the Kyiv Theological Academy of the Ukrainian Orthodox Church, gave an overview of the current situations and trends in Ukraine.

Bortnyk said for a long time, Ukrainian and Russian identities existed in the country without real conflict. Although Ukrainian is the country’s official language, many people still speak Russian in their homes.

After the dissolution of the Soviet Union, there were bilateral relations between the two countries. But that began to deteriorate during the Ukrainian Revolution and the annexation of Crimea from Ukraine. In July 2014, a passenger flight from Amsterdam to Kuala Lumpur was shot down while flying over eastern Ukraine, an area controlled by pro-Russian rebels,  causing further strain.

“Our president, Petro Poroshenko, who is well known in the United States, used nationalistic rhetoric as well as religious arguments in his re-election campaign. He received only 24 percent of the vote and was defeated by (Volodymyr) Zelensky. The question remains whether the new president is less populist.”

What is the role of the Church in these challenging times?

Spini said it is important the Church distinguishes itself from populist jargon.

“A focus on the dogmatic parts of Christianity would be the best antidote against any distortion of religion and help unravel the profound differences between this kind of phony operation of political theology and instead the proclamation of the kingdom of God that cannot be assimilated with any political projects,” she said. 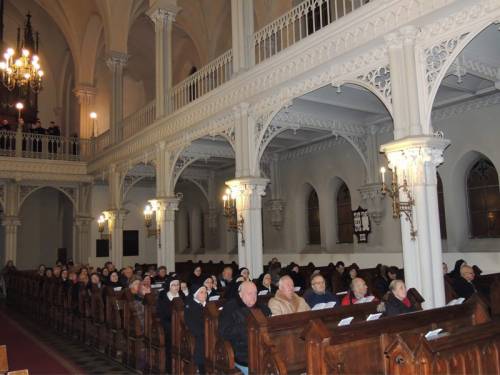 An ecumenical service in Warsaw, Poland. The Reformed Church in Warsaw is in what was the Jewish ghetto where Christians, among others, worked to help Jews escape during World War II. (Photo by Ellen Smith)

Jablonski said Christians should be, first of all, subject to the gospel and his or her own conscience, not to the hierarchy of church powers.

“We should try to live by the principle, which is for me, one of the most important — how you believe is how you should live,” he said. “Your faith is your life. I can see now that when a minister is showing his obedience to the gospel and is showing his authenticity, people see it. They can notice it and they can follow. The personal conviction, the witnessing, I think is the only way to overcome this trend toward nationalism and populism.”

A recording of the full webinar will be available on the World Mission Facebook page in the coming days.