Moving Forward Implementation Commission meets to complete its report ahead of a Feb. 21 deadline 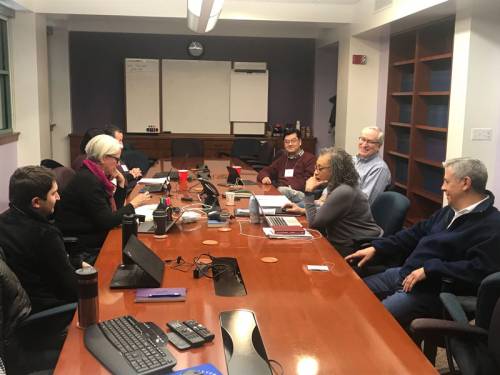 Members of the Moving Forward Implementation Commission share a light moment during Thursday’s meeting at the Presbyterian Center in Louisville. (Photo by Mike Ferguson)

LOUISVILLE — The Moving Forward Implementation Commission worked most of the day Thursday on crafting the recommendations it will make to the 224th General Assembly, set for June 20-27 in Baltimore.

Meeting in St. Louis in 2018, the 223rd General Assembly charged the Moving Forward Implementation Commission with, among other duties, ensuring compliance and implementation of 2018 assembly action and the recommendations the assembly endorsed from MFIC’s predecessor, the Way Forward Commission, as well as the All-Agency Review Committee.

Commissioners said Thursday that they hope to have their recommendations ready by the close of their work Friday evening. They have some wiggle room: The deadline for filing their report to the assembly is Feb. 21.

Nelson said he struggles with the larger picture: Many in new worshiping communities are immigrants who identify strongly as Presbyterians. “They are committed to the denomination, and we are refusing to let them be stewards. That becomes problematic,” he said. “There are fears about what the new evangelism will be in America, and we have to address that with some level of integrity. Otherwise we are marginalizing people.”

Moffett, who appeared mid-afternoon, responded to one idea the commission was considering — dropping the word “board” from the Presbyterian Mission Agency Board and instead calling it a committee.

Moffett asked the commission to leave the name intact.

“It’s not a small thing. Your name is your identity,” she said.

Commissioners praised both Nelson and Moffett for their efforts to engender cooperative efforts between the PMA and the Office of the General Assembly. During a meeting in Chicago last month, those efforts were on ready display, said Marco Grimaldo, the commission’s co-chair along with the Rev. Larryetta Ellis.

“I was very impressed with the leadership you and J. Herbert exercised together,” he told Moffett. “It could be a model for the church as a whole.”

Late Thursday afternoon, the commission turned to discussing the five recommendations made last week by the Special Committee on National Church Financial Sustainability. That committee is seeking endorsement for all or some of its recommendations by the Moving Forward Implementation Commission in the lead-up to the June assembly.

Commissioners spoke favorably about some recommendations, including one by which the PMA, OGA and the A Corp would participate in a unified budget structure. The MFIC recommendation will be “more holistic” than the recommendation put forth by the financial sustainability committee, Eardley said.

Another recommendation from the financial sustainability committee was less enthusiastically received: that the 2020 assembly form a commission to unify the OGA and PMA into one agency, with the A Corp remaining as the denomination’s legal entity.

“This isn’t chipping away at anything. This is a bombshell,” said the Rev. Eric Beane.

Eardley said an alternative to this recommendation — especially in light of “the good collaboration and conversation that seems to be taking off, or at least is turning onto the runway” — is to ask, “is there a way for a task force to help agencies see how closely they align?”

The Rev. Debra Avery wasn’t “against the idea of doing something like this. But if we are going to sign onto it, I want way, way, way more details and a prescription for how it looks.”

Commissioners resume their work at 8:30 a.m. Friday at the Presbyterian Center in Louisville.