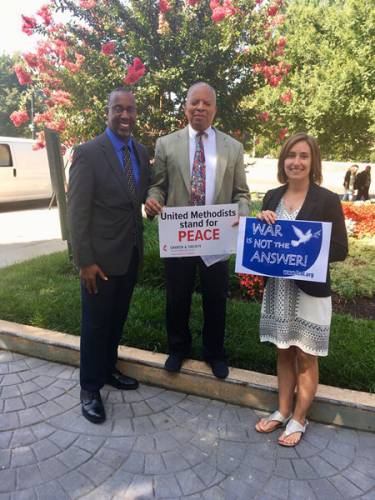 The Rev. Jimmie Hawkins, at left, is joined by Mark W. Harrison, director of the Peace and Justice Program and special assistant to the United Methodist Church’s General Secretary, and Emily Sutphin, an intern in the Office of Public Witness, during Tuesday’s press briefing to encourage the U.S. government to engage in diplomacy with Iran. (Photo by Catherine Gordon)

LOUISVILLE — Faith leaders including the Rev. Dr. J. Herbert Nelson, II, Stated Clerk of the Presbyterian Church (U.S.A.), and the Rev. Jimmie Hawkins, director of the Office of Public Witness, say that diplomacy and not warfare is the nation’s best policy toward Iran.

A half-dozen faith leaders gathered on Capitol Hill Tuesday to discuss “Back from the Brink,” a letter signed by more than 100 denominational officials, educators and pastors — including Nelson and Hawkins — urging the administration of President Donald J. Trump to avoid war with Iran. Faith leaders are also asking Congress to amend the National Defense Authorization Act to ensure the president cannot take unauthorized unilateral military action in or against Iran.

“While we agree that Iran should repudiate terrorism and not resume uranium enrichment,” the letter states, “we stand as religious leaders to say that war is not the answer with Iran and is unjustifiable on moral and religious grounds.” The faith leaders note that since the start of the war in Iraq in 2003, a half-million lives have been lost and nearly $6 trillion spent.

“Preventing another costly and unjust war in the Middle East is a moral imperative,” the letter states.

It’s time for a different approach, the letter says, and “Back from the Brink” suggests this three-step approach:

After attending the Capitol Hill press conference Tuesday, Hawkins said he’s concerned that many Americans remember well the 444-day Iran hostage crisis (November 1979 through January 1981) but have forgotten about U.S. support for the Shah of Iran, who was overthrown in 1979.

“We need a concession on our part for the role we have played,” Hawkins said. “It’s not that the Iranian government hates us for our freedom, but there is a history that must be reckoned with.”

In the lead-up to the 2020 presidential election, Hawkins said Americans “really don’t know what’s on the mind of the administration. As the election draws nearer, I’m really fearful what actions the president might take. There’s the old saying, ‘Nothing brings a country together like a war.’ I’m fearful military action might bring us to catastrophic war.”

Hawkins called the faith leaders’ three suggestions “commonsense steps we can take that can lead us down a saner path. We can acknowledge our differences but say that we both want peace and civility. I think the American and Iranian people both want better relations … We’ve seen how disastrous the Iraq war has been. There is no way out of a war that will leave Iran a better place than it is now.”

“I hope that as people of faith we can follow the Prince of Peace,” Hawkins said. “Peace takes patience, deliberation and a determination to stay on that path.”