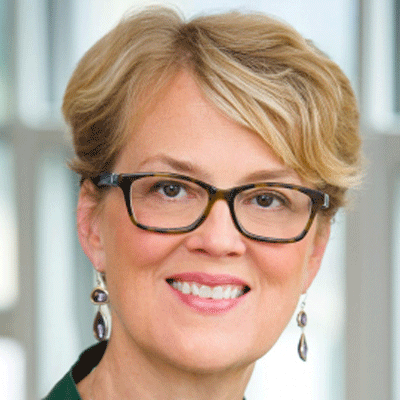 LOUISVILLE — The Rev. Dr. Katharine Rhodes Henderson has already announced her plan to transition as president of Auburn Seminary in New York City. So when she was asked this week during Leading Theologically about the work her soul must have, a famous question posed by the Rev. Dr. Katie Geneva Cannon, Henderson was ready.

It turns out Cannon was Henderson’s preaching tutor in seminary during the late 1970s, helping her to outline the first sermon she ever gave. “Katie and I go a long way back,” Henderson told the Rev. Dr. Lee Hinson-Hasty of the Presbyterian Foundation, who hosts Leading Theologically every two weeks and is Senior Director for Theological Education Funds Development for the Committee on Theological Education of the Presbyterian Church (U.S.A.). “As I transition from the presidency of Auburn Seminary, I am listening for the prompting of the Spirit as to what work my soul must have … Ministry has always come to me, often unbidden. I’m not too anxious about the form it’s going to take.”

Henderson said she got a call last month from another “dear friend,” the Rev. Dr. James Forbes Jr., who asked her, “Katharine, why can’t God just keep a secret a little moment longer?”

Hinson-Hasty marveled at the company Henderson keeps — Cannon and Forbes are two of the top preachers in Presbyterian Church history — and asked her, “Do you have a superpower I don’t know about?”

“I think we all have superpowers,” Henderson responded. Those powers “come to us naturally” at Auburn Seminary through a group of senior fellows including the Rev. Dr. William Barber II, Rabbi Sharon Brous, Sister Simone Campbell and others.

“I think one my [my superpowers], and it’s related to the Spirit, is to see patterns and connections” that may not be so apparent to others, Henderson said. “We are a national institution now, connecting groups around the country who are working on issues of justice and creating a world where we all belong. One of my superpowers is figuring out who is in that network. Who needs to be called in and for what purpose?”

Those are tools theological students use in their discernment, Hinson-Hasty said. “What is it I have to offer in this moment? What does the world need? You call them ‘ethical spectacles,” he told Henderson, glasses that “Auburn has helped to create.”

Auburn Seminary was founded in Auburn, New York, in 1818, three decades before the Seneca Falls Convention, the nation’s first women’s rights gathering, was held about 15 miles to the west. While the seminary was heavily involved in the abolitionist movement, it was also founded on land stolen from the Iroquois people, Henderson said, and originally constructed by local prisoners “who labored, of course, without pay.”

“On the positive side, we trained women and people of color early on,” she said. Harriet Tubman lived down the street, and a faculty home was used by the Underground Railroad. “Contradictory forces, both theological and cultural, have always been at play,” Henderson said.

When the discussion turned toward transparency, she said she’s been thinking recently about “what lies beneath and what needs to be uncovered,” especially as she and her husband discovered “a squirrel issue” behind the walls during a recent kitchen renovation. They also discovered that “snakes are fond of this area as well.”

As Adrienne Maree Brown, who wrote “Emergent Strategy,” pointed out, “things are not getting worse — they are being uncovered, and we must hold each other tight as we pull back that veil,” Henderson said. “It’s like our renovation: You don’t know what lies beneath until you do the demolition.” As the multiple pandemics have shown, “what’s true in our kitchen is also true in our culture. Once you start uncovering things, you can’t go back. There’s not what some people imagine as normal. It’s a time of great turning” for many people, according to Henderson. “It’s a time full of great possibility and also precarity.”

Those voices we ought to listen to, Hinson-Hasty said, may not be people we know.

Henderson said her mother, who died five years ago in her 90s and grew up in the midst of racial segregation, couldn’t understand even in her 90s “why we aren’t out marching in the streets,” Henderson said.

Reading thoughtful books on how the uncovering is occurring or ought to occur isn’t enough, she said. It’s also important to act, by organizing, marching or giving money to a favorite cause.

“We have an untapped potential, a network of congregations,” she said, “people we can connect with who are trying to build this world where we all belong.”

For her benediction, Henderson read the poet Rumi’s “The Guest House.” It says in part: “This being human is a guest house. Every morning a new arrival. A joy, a depression, a meanness, some momentary awareness comes as an unexpected visitor. Welcome and entertain them all! … The dark thought, the shame, the malice, meet them at the door laughing, and invite them in. Be grateful for whoever comes, because each has been sent as a guide from beyond.”