Inspiring faith in our youth. Support the Pentecost Offering.
Make A Donation Click Here >
Home › Moving from passion to action 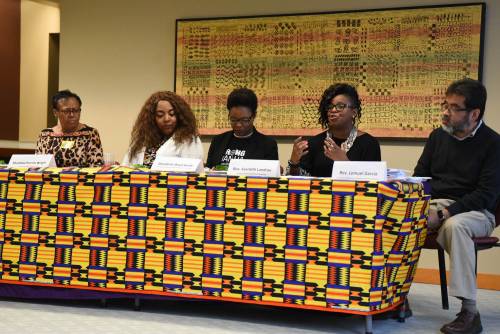 All were words used to describe the morning sermon delivered by The Rev. Dr. Kevin W. Cosby, pastor of St. Stephen Baptist Church and president of Simmons College of Kentucky, as the Presbyterian Church (U.S.A.) celebrated and commemorated the life and legacy of the Rev. Dr. Martin Luther King Jr. last week.

In his sermon, Cosby encouraged chapel-goers to use their imagination to better understand the plight of people who are oppressed.  The focus of the celebration was King’s “Letter from Birmingham Jail.”  Worshipers were challenged with these questions: What have we learned? Where are we now? Where are we going?

They were also given a call to action.

“To truly be Christian,” Cosby said, “is to sit where the other person sits and to view life through their lenses. That is what Dr. King is calling us all to do – not only Dr. King, but that’s what Christ is calling us to do.” 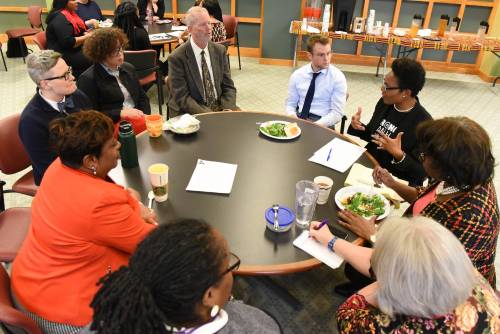 Following the service, many attendees attended a brown bag luncheon where representatives from community-based groups including the Bail Project, the Louisville Urban League, and Rev. Angela Johnson, pastor of Grace Hope Presbyterian Church in Louisville and vice moderator of Presbytery of Mid-Kentucky, outlined the work of their organizations and identified ways participants could become involved in dismantling structural racism.

In addition to the community groups, the Rev. Lemuel Garcia, associate director of Racial Equity & Women’s Intercultural Ministries and the Rev. Everdith Landrau, manager of ecumenical relations, networking, resource development and education in the Office of the General Assembly, explained the efforts their areas.

Each presenter pointed out specific ways Presbyterians can engage in the fight against racism. Garcia reminded individuals of the resolution passed at the 223rd General Assembly (2018) to “Declare an Imperative for the Reformation of the Presbyterian Church (U.S.A.) in being a Transformative Church in this Intercultural Era.”

“To accomplish this,” Garcia said, “our church has to move from passion to action”.

Landrau invited participants to take part in the Week of Prayer for Christian Unity January 18-25. An ecumenical prayer service will be held in the chapel at the Presbyterian Center, 100 Witherspoon Street in Louisville, at 9 a.m. on Wednesday, Jan. 23. The service will include Presbyterian Center staff and friends representing various Christian denominations.  Metropolitan Zacharia Mar Nicholovos from the Malankara Orthodox Syrian Church will deliver the message. A public prayer witness in front of the Presbyterian Center is set for 10:30-11 a.m. on Friday, Jan. 25.

Landrau concluded her presentation with this King quote: “To be a Christian without prayer is no more possible than to be alive without breathing.”

Johnson offered this exhortation: “Churches can’t appear to be closed. We have to get outside and be present in the community.

“We simply have to learn to do church differently to reach everybody,” she said. “The church has been empowered to do justice.”

Shandelier Boyd-Smith of the Louisville Urban League informed participants of the wholistic approach her organization takes to empower and improve clients’ lives.  In addition to advocacy and justice work, those efforts include providing job training and placement, assisting individuals with financial literacy and moving people from rental housing to home ownership. People of color can go from economic and civil injustice having suffered the effects of systemic racism toward the goal of equal opportunities that can build wealth and a respectable quality of life. That, the League says, turns the efforts of King and others from dream to reality.

The National Urban League has 90 affiliates serving 300 communities in 37 states and the District of Columbia. To learn how your church can partner with your local Urban League to help put an end to systemic racism visit the League’s website.

During the 223rd General Assembly in 2018, hundreds of Presbyterians took part in a march to St. Louis’ Justice Center, calling attention to the injustice of the cash bail system. This effort was organized with assistance from the St. Louis affiliate of The Bail Project. The Bail Project is trying to end cash bail in America. 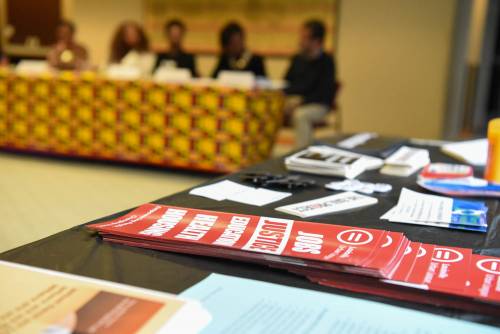 Panelists made sure attendees had plenty of brochures to help with the work of eradicating structural racism. (Photo by Rich Copley)

Shameka Parrish Wright of The Bail Project’s Louisville affiliate observed the recurring cycle of injustice that entangles victims of the court and cash bail system. Wright noted the ways the justice system has the “legal authority” to practice systemic racism and to oppress low income residents and people of color. “Presbyterians can get involved in helping put an end to the inequities of our legal system,” she said. “Make sure people in your congregations know their rights.”