#GivingTuesday – Join the PC(USA) in responding to a world in need! Give now!
Make A Donation Click Here >
Home › Mission co-worker Gartrell honored in Brazil by community he serves

Prestigious award given for public service 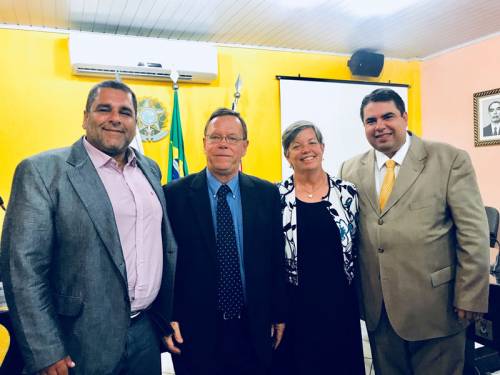 LOUISVILLE – The Rev. Gordon Gartrell, a Presbyterian World Mission co-worker, recently received a prestigious award from the town council of Governador Mangaberia, Bahi, in northwestern Brazil where he serves with his wife, Dorothy. Gartrell was nominated for the honor by Cronor da Costa Silva, president of the city council and a noted Roman Catholic lay leader.

Each year, the town council awards medals of commendation to local residents, recognizing them for public service in honor of Otávio Mangabeira, the town’s founder. In the 2018 award ceremony, Gartrell was the only local religious leader honored.

Governador Managbeira is a town of about 6,000 facing the same challenges of many towns in the region, including limited employment opportunities for young people and growing drug-related violence.

The Gartrells are career mission workers who are specialists in redeveloping small, struggling congregations. They currently serve with the United Presbyterian Church of Brazil (IPU).

When the Gartrells arrived in Governador Mangabeira in April 2015, they began accompanying a church with 27 members, but only about 5-8 attended services. Now the church has 37 members and 35-40 people attend worship.

“A key to their ministry has been their simple, constant presence in the community,” said Dennis Smith, World Mission’s regional liaison for South America. “Gordon makes pastoral visits most days of the week — both to church members and to all members of the community who request pastoral support — and, having been born the son of Presbyterian mission workers in Brazil, he has been very comfortable maintaining a constant, friendly, low-key presence in town. Dorothy has worked to strengthen the church’s Christian Education program and has also given English classes.

The letter accompanying the medal praised Gartrell “for your service to your own faith community, but also for your emphasis on community service as an expression of your faith.”

When the Gartrells were first appointed to serve as mission co-workers in Brazil in 1990, both already held a deep passion for the country and its people.

Gordon grew up in Brazil, where his parents, Sandy and Bert Gartrell, were missionaries for 31 years. He sensed a call to ministry early in his teen years, and during his seminary studies in the United States, he returned to Brazil for short-term service. He lived with a veteran missionary family and served along the Trans-Amazon Highway.

Dorothy went back to the United States for further education but knew that she wanted to return to Brazil for long-term mission service. She and Gordon served in Brazil for 18 years in church planting and evangelism until their assignment with their previous partner, the Independent Presbyterian Church of Brazil, ended. They have worked with the United Presbyterian Church of Brazil since 2012.