“I will bless you, and make your name great, so you will be a blessing.” 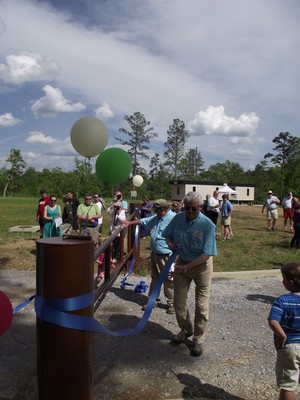 This is a story of hope, rebirth, and ultimately, faith.  On April 28, 2015 Camp and Conference ministry celebrated the grand opening of Living River Camp in Alabama, the first Presbyterian Church, (U.S.A.) camp to open in 20 years.

Nearly 1,000 people gathered to lift up this new ministry for the children, youth, and adults in their Presbytery and region.

“Living River is the one thing this Presbytery agrees on,” says Keener Hudson, Chair of the Camping Committee of the Presbytery of Sheppards and Lapsley.

This statement was lifted up throughout the day as unifying force to point to a brighter future for the church.

“Sure, there are still challenges ahead, but this camp is something we can all be proud of,” adds Hudson.

Located on the banks of the Cahaba River south of Birmingham, Alabama, Living River boasts 400 wooded acres. Facilities include four retreat/cabin buildings with capacity for 116 participants and a large multi-purpose recreation and dining hall.

“Having more than one program focus allows us to move towards financial sustainability.  Plus, God calls us to care for and share creation. This is a great way to reach beyond the population of the Presbytery, as well.

Associate Executive Presbyter of the Presbytery of Shepphards and Lapsley, Robert Hay spearheaded the creation of Living River.

His passion for camping began when his pastor Jim Speed took Hay’s youth group to Covenant Point camp for work camps.  Covenant Mountain, which Speed was instrumental in opening, was one of two former camp properties owned by the Presbytery.

“By working on something outside of themselves at Covenant Mountain, we were showing kids that they were called to help others,” says Speed. “The community that grew during those trips was instrumental in their faith development.”

Hay’s path to the pastorate was sparked at Covenant Mountain— and left him with lifelong passion for camping ministry.

“I remember being with my dad at Gulftreat [another former camp property of the Presbytery] as a child,” says Robert S. Hay, Jr.  “My brother and I began to see or path in ministry, through this camping connection.

When Hay and others began fundraising 18 years ago for Living River, they received an admonition from Felix Yarboro.  Now retired, he was the men’s ministry director at Independent Presbyterian Church in Birmingham.

“I told them don’t talk to me until you have a business plan,” he remembers. “Then they showed it to me and I’ve been on board every since!“So many times we start with an idea and a hope, but without a sustainable road map, it won’t last.  I’m excited to see the camp starting on that path.”

In his concluding grand opening remarks, Nelson encouraged those gathered to celebrate— and to always remember this day.

“God’s blessings come through our children, collectively we get to see our dream fulfilled, we have the facilities to start up,” he said.

“But let’s be humble, remembering we are now all charged with being a blessing to Living River, so it may transform many lives, now and in the future. I praise God for this.”