Learning to let go of a dying spouse: Keynote speaker and preacher at closing worship chooses to not be on a ‘death watch’ 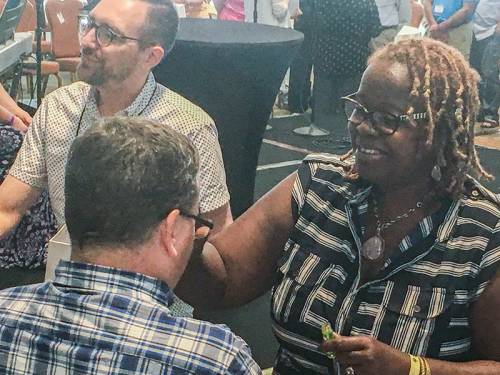 These were the last words the Rev. Aisha Brooks-Lytle heard her husband speak as she was preparing to go to New Hampshire for a vacation and before coming here to speak at “Living, Dying, Rising,” the 1001 New Worshiping Communities national gathering.

Carl hadn’t spoken to her in months. He suffers from a rare degenerative neurological disease. Inherited from his father, Spinocerebellar Ataxia 7 goes “quadruple speed” in the second generation, taking away his ability to verbally process things mentally. Physically, he has little use of his body. He’s been in rapid decline over the past five years and has been in a nursing home since July 2016.

“He told me I had to put him in there,” she said softly. “That was rough.”

Brooks-Lytle spoke during Thursday’s plenary on prayer — how powerful and effective it is, how the Spirit helps us when we are weak, praying for us with sighs too deep for words. Later in the afternoon she preached on “Rising,” about how Jesus showed up when the disciples were going through complicated grief.

Admitting she “can’t stand it” when people offer simplistic responses to things she knows are complex, she told those gathered she knows “Jesus is always ready to give peace and power.” The question is, “Are we ready to receive it?”

“Just relax, God’s got this,” she kept saying.

In 1997, Brooks-Lytle was finishing up a jazz vocal performance degree at Temple University. It’s where she met her husband, a jazz guitar major. They played in the band and even put out a CD together. That year her dad died from cancer. She took a week off to grieve and at the request of a friend back at home in Philadelphia, went on a racial-reconciliation trip to Jackson, Mississippi. It was the first time she had attended a mission trip with Presbyterians.

“Right before I went on the trip they told me that Wayne Presbyterian Church was going to have a job opening in youth ministry, that I should apply for it,” Brooks-Lytle said. “I only knew this through a woman who did youth ministry there at the time.”

Brooks-Lytle became a Presbyterian in 1998, going to work at Wayne as their middle school director. After working there four years she went to Princeton Theological Seminary. Graduating in 2005, she served churches in New Jersey and Pennsylvania — all while her husband’s condition was worsening.

In 2013, Wayne Presbyterian was looking for a “bridge pastor” — one who could help lead their mission efforts. They were continuing to deepen a relationship with New Spirit Community Church, an urban church in the southwest Philadelphia. Thirteen miles apart, Wayne wanted to make a difference in the disparity between their two faith communities by sharing resources, time, energy, love and prayer. Presbyterians closest to Brooks-Lytle encouraged her to apply for the job.

She was called to the position and came home to Wayne Presbyterian as their mission pastor. She is also organizing pastor of The Common Place, which is a blend of two worshiping communities. They work together with partners to create safe space — doing life together by offering faith, education and social service support in southwest Philadelphia.

Long before going into the nursing home, Carl told Aisha two things. First, he spoke about how “she wouldn’t even be Presbyterian” if her daddy hadn’t died the way he did. “You probably wouldn’t have even gone on that trip,” he said. “Secondly, ask yourself if I wasn’t sick, would you have come back home to Wayne? You might have not had the opportunity to start The Common Place.”

She’s thought about those words often, especially now with the disease taking away his voice. “Honestly,” she said, “The Common Place is a statement of grace in my life as Carl is declining to be with God. I decided last year that I was going to choose to live and not do a death watch. It’s why I said yes to coming here.”

She says it was another turning point for her. A deepening recognition that sometimes “you just have to pull the plug, whether it’s sin, or old habits, or watching a spouse dying, you have to let go.”

Aisha and Carl are 42 and they’ve been married 18 years. Counting the time they dated they’ve been together nearly half their lives. Aisha lives with their 11-year-old son and 62-year-old mother. She visits Carl once a week. The community of faith she belongs to visits him often, as does the hospice staff, family and friends. They all write in a notebook to remember like Aisha did on the weekend of the July 22.

“The first words my husband has spoken to me in months, ‘Love you.’”