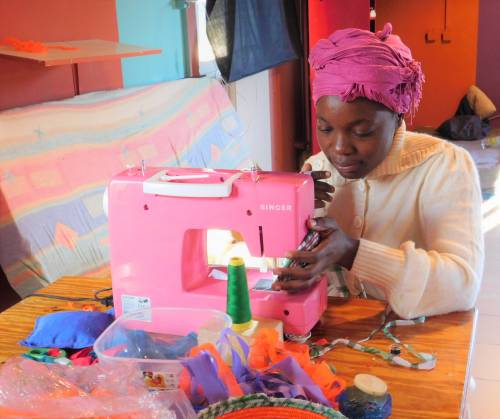 LESVOS, Greece — In the shadow of what many consider the worst refugee camp in Europe is a beacon of hope, operated mostly by volunteers, a group called Lesvos Solidarity.

“The Pikpa Camp and the Mosaik Cultural Centre — with its life vest upcycling workshop —and the Nan Restaurant refugee cooperative is a contrasting truth to the Moria camp,” said Burkhard Paetzold, World Mission’s regional liaison for Western and Central Europe. “This is a great example of how actively living and working with refugees helps to strengthen empathy, creativity and dignity of all involved.”

In March 2016, the number of refugees stuck in Lesvos dramatically increased. To respond to the quickly-changing reality and in order to effectively manage the donations in money and manpower that kept streaming in from every part of the world, part of the group called “The Village of All Together” founded Lesvos Solidarity as an official non-governmental organization. Since then, Lesvos Solidarity has continued to develop initiatives to support refugees and locals.

“Pikpa is a small sanctuary-camp for refugees within the boundaries of the town of Mytilini, serving especially the most vulnerable who have experienced trauma in Moria Camp or on the journey to Greece,” said the Rev. Dr.  Laurie Kraus, director of Presbyterian Disaster Assistance. “Its partner ministry Mosaik provides legal services, economic opportunity and emotional and spiritual support for those from both camps. Their refugee-founded and -managed restaurant, Nan, sets a table of welcome and prepares a feast. Eating there was a little like a foretaste of the heavenly banquet, where all will find sanctuary and welcome.”

Pikpa camp was the first open refugee camp in Greece. It was intended as a political statement against the detention of refugees and migrants in Greece and a plea for inclusion and integration of refugees in local society. The camp is operated by Greeks who live and work in Mytilini, which allows them to be quick and flexible in responding the ever-changing needs of those journeying to Lesvos.

In the autumn of 2014, Pikpa was hosting 600 refugees a day, even though the capacity was only 150. The group was also supporting members of the local community who were suffering due to the economic crisis by providing food and economic assistance to families in need.

In 2015 as numbers began to decline, Pikpa began hosting the most vulnerable. For instance, it was the only place supporting families who had lost loved ones at sea, assisting with funeral arrangements and the identification process as needed.

Additionally, Lesvos Solidarity distributed up to 3,000 meals a day to the camps, at the port and around the community. It also distributed medicines supporting the local hospital and clinics. They were active on Greece’s southern shoreline, supporting boat landings. Pikpa camp became a central distribution point for the whole island, with donations and volunteers coming in from around the world.

In the meantime, the group continued to develop Pikpa camp. The small wooden houses were equipped with kitchenettes and heating and a communal kitchen was created. Residents were provided with medical care and psychological support. Greek and English language support classes were offered. 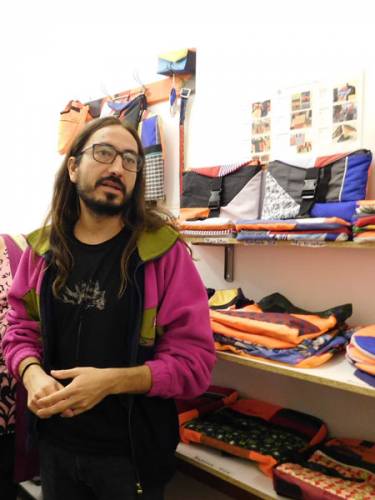 The workshop/gift shop at Mosaik in Mytilini. The Mosaik Support Centre opened in response to the need for sustainable support structures for refugees and locals. (Photo by Kathy Melvin)

The Mosaik Support Centre opened in July 2016 in collaboration with Borderline Europe in response to the need for sustainable support structures for refugees and locals. In March 2019, Lesvos Solidarity took over full responsibility for operations at Mosaik. 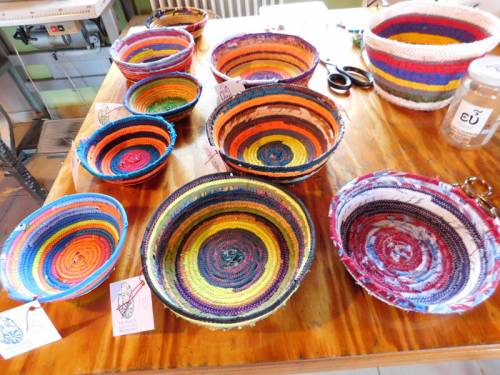 Mosaik also created an upcycling workshop to inspire creativity, promote recycling, and process discarded materials. Hundreds of thousands of life jackets were abandoned on the shores of Lesvos. But now, thanks to Mosaik and residents of Pikpa Camp, those discarded jackets are being used to create and sell jewelry, wallets, bags, lighting and other decorative objects.

Nan was also created by four women to help put refugees and locals to work together. For those who are trapped on the island for an indeterminate length of time, unsure of what the future holds, this small restaurant brings refugees together with the locals to serve food that is getting rave reviews.

The menu says the dishes are influenced by both Mediterranean and Eastern cuisine. “Our aim is to make food the means to change the perceptions of refugees and them to integrate and understand one another.” 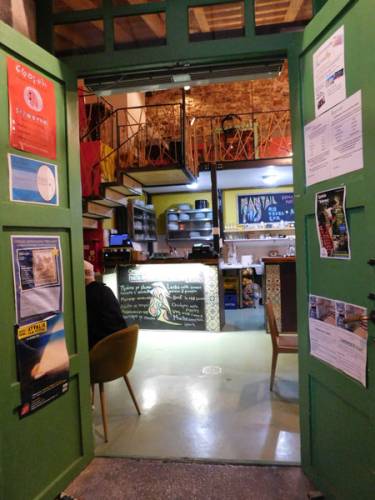 Nan Restaurant brings refugees together with locals to serve meals that are getting rave reviews. (Photo by Kathy Melvin)

Nan has also adopted environmentally friendly practices to promote recycling. The excess food is given to organizations and social kitchens for the poor and refugees. The tables are made by refugees from pallets. The food comes from local producers and those who promote fair trade in Greece and abroad.

“We are indeed grateful to be providing an additional solidarity grant to our partners on Lesvos, whose continued faithfulness to those on the move is inspiring,” said Kraus. “Though the numbers of refugees seeking shelter have declined, the deepening indifference of other receiving countries throughout Europe has kept thousands stuck in increasingly dangerous and desperate conditions. The Moria camp on Lesvos, meant to support 3,000 refugees, has swelled to 13,000 residents, a dangerous overcrowding that produces sickness, violence, and an increasing sense of hopelessness.

“Yet in the shadow of Moria, a small dedicated group of staff and volunteers tend the ministries of Pikpa and Mosaik,” Kraus said, “offering refuge, dignity and hope to individuals and families fleeing their homes in search of safety and a sustainable life.”