by Cara Taylor with Talin Topalakian 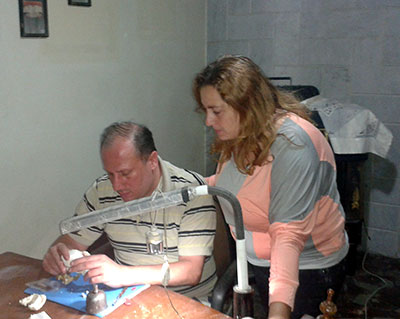 In a besieged corner of Aleppo, Shahe, a victim of sudden blindness lost his only source of income as a dental technician. He and his wife, Talin, struggled to stay in their home when the monthly payments became impossible. While their oldest son was excelling in school, the younger boy’s autism required special care, and the wonderful Armenian institution on which they had relied closed, another casualty of war.

Shahe’s family is just one of thousands of Christian Armenians who remain in Syria and for whom fleeing is not an option. This land is home to four generations of genocide survivors. They have not forgotten the blood poured out in these desert sands.

Shahe’s eyes needed treatment to regain his sight. Shahe’s soul needed a sense of dignity. When his wife Talin came to Jinishian for help, Shahe resisted the idea of accepting aid that he could not earn.

Before his eyes were healed, Shahe began to see that by receiving a gift he could not repay, he would be freed to do his work. Then those in greater need than he might find help and hope as well. Shahe said “yes” to Jinishian’s financial assistance toward their otherwise insurmountable housing and medical expenses.

Talin and Shahe went to the dental laboratory each day, working hand in hand as he recovered his vision and his confidence. Jinishian also found a new place for their young son to go twice a week: a Christian agency offering special care for autistic children. Their oldest has continued winning school awards and competitions. Talin felt her burdens as a wife and mother lifting.

“We thank God that now we are in a better place,” Talin told the Jinishian team. “Without you we could not survive all these difficulties in wartime.”

Syria has lost almost half its population in this war, yet many who remain believe the cost of fleeing is too high. Jinishian’s work began there 50 years ago, and we are not leaving now. With your help, our work makes it possible for these Christians to remain in their homeland—not merely to survive but to live, keeping faith in community.