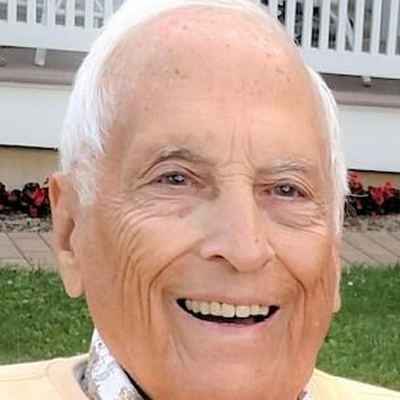 According to his obituary in the Desert Sun newspaper, Mead was born Dec. 15, 1930, in Westfield, New York. He earned a bachelor’s degree in management engineering from Rensselaer Polytechnic Institute in Troy, New York, in 1952, marrying Jane on Nov. 22 of that year. They’d been married 67 years at the time of her death on Feb. 6.

After stints serving in the Navy and working as a plant management trainee for the National Gypsum Company, he and Jane moved with their two oldest sons back to their hometown to begin the process of learning the newspaper and printing business. He was named editor of the Westfield Republican in 1959 and served in that capacity for 22 years, following in the footsteps of his father-in-law and grandfather-in-law.

He was a tireless promoter of the community, both by writing his weekly column, “Main Street Notes,” and by acting on his belief that newspapers should emphasize local people and local events. He was a member, director, and, in 1976, president of the New York State Press Association, a statewide organization representing nearly 400 weekly newspapers now known as the New York Press Service.

Mead was a passionate believer in the power of volunteering and spent his entire adult life in the service of others. He was an active Rotarian for more than 50 years and served as a consultant to Laubach Literacy (now ProLiteracy), which helped introduce about 150,000 Americans to reading each year and has grown to embrace 34 developing countries.

He was a ruling elder in the PC(USA) and, together with his wife, helped found Spirit of the Desert Presbyterian Fellowship in Palm Desert, California. He distributed food with Hidden Harvest until just months before his death and volunteered for the Alzheimer’s Association and Mended Hearts, all in California’s Coachella Valley.

He loved reading, sailing on Chautauqua Lake in New York state, and enjoying a perfectly made Manhattan. He and Jane traveled extensively. Their last international trip was to Japan in 2016 to visit a former exchange student, Hidenori Endo, when Jim and Jane were 85 and 84, respectively.

A service of remembrance to celebrate the lives of Jim and Jane will be held at the Presbyterian House at the Chautauqua Institution during the summer of 2021.