Make A Donation Click Here >
Home › Jane Mead, who ran the GA newsroom for a decade, is dead at age 88 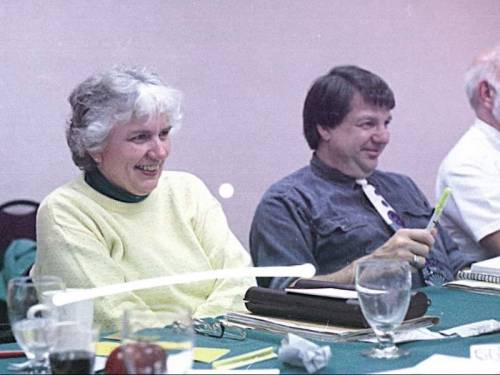 Jane Mead, who ran the General Assembly newsroom for a decade beginning in the mid-1990s, died Thursday at age 88. Here she’s pictured with the Rev. Jerry Van Marter, former coordinator of the Presbyterian News Service. (Photo by Bill Lancaster)

LOUISVILLE — Jane Adelle (Thompson) Mead, age 88, died peacefully Thursday with her husband of 67 years, her oldest son and her pastor by her side in Rancho Mirage, Calif.

Mead, a legendary journalist, managed the General Assembly newsroom for several years from the mid-1990s through the mid-2000s, according to the Rev. Jerry Van Marter, former coordinator of Presbyterian News Service. She co-founded the Presbyterian Writers Guild and created what Van Marter called “one of the most effective marketing campaigns ever in the church with a bumper sticker/billboard/poster campaign for the Synod of the Northeast which read, simply, ‘Tough week? We’re open Sundays!’” Numerous presbyteries and synods borrowed the campaign; a number of those bumper stickers are still around.

“She was a friend, mentor and inspiration for a couple generations of Presbyterian communicators,” Van Marter said.

Born on February 15, 1931 in Jamestown, New York, the daughter of the late Herbert Faber and Helen (Peglar) Thompson, Jane graduated from Westfield Academy and Central School in 1949. She received a bachelor’s degree from Cornell University in Ithaca, New York in 1953, where she was a member of the Delta Gamma sorority.

She and her husband, James Wilson Mead, grew up together in Westfield, New York. They were married there on November 22, 1952 in the First Presbyterian Church. Jane was a senior in college and Jim was an ensign serving in the United States Naval Reserve on the USS Brownson.

In 1978 she was elected to be a commissioner to the General Assembly in San Diego, where she was one of fewer than 10% of the commissioners to cast a ballot in favor of equal ordination of gays and lesbians. She was a founding member of the Spirit of the Desert Presbyterian Fellowship, and for the past five years had been a member of the Community Presbyterian Church of Cathedral City, Calif., where she was served as clerk of session.

In 1972 she and Jim purchased a cottage on the grounds of Chautauqua Institution in Chautauqua, New York, where they spent nearly every summer for the rest of their lives. A former member of the institution’s board of trustees, she was also editor of the Chautauquan Daily from 1982 to 1986. Under her direction, the newspaper was redesigned and updated.

Jane volunteered throughout her adult life, including distributing food with Hidden Harvest just weeks before her death and for the Alzheimer’s Association. After a 2004 trip to Kenya, she and her husband helped establish the Bell House Academy, a trade school operated by Albert Mburu, who they met while Jane was in Nairobi to edit the memoirs of the Presbyterian Archbishop of East Africa.

She was a full-time mom until her youngest child was in college but worked as a part-time preschool teacher during school hours and later as a customer service representative for the printing division of Westfield Republican, Inc.

Jane loved reading, travel, knitting, and needlepoint. She was always ready for an adventure, like riding all four roller coasters at Busch Gardens at age 75. Her last international trip was for 18 days to Japan to visit with a former exchange student, Hidenori Endo, when Jim and Jane were 85 and 84, respectively.

Jane’s greatest joy in life was spending time with her family. She is survived by her husband, Jim, and children Christopher (Gail) of Orinda, Calif., Patrick (Amy) of Columbia, Mary., and Peter (Denise) Mead, of Columbia, Mary., and Elizabeth (Stephen) Mead Fox of Sandwich, Mass. She also is survived by her grandchildren Helen, Carson, Cooper, Augusta and Maura Mead, and William, Patrick and Christopher Fox, as well as several nieces and nephews. She was preceded in death by her parents, Herbert and Helen, and her sister Helen Nai.

A service of remembrance will be held at the Community Presbyterian Church in Cathedral City, Calif., at 10 a.m. on Saturday, followed by a reception at the church. Jane’s friends, co-workers and colleagues in the community are invited to celebrate her life. A second service will be held at Presbyterian House in Chautauqua Institution, Chautauqua, New York, at 10 a.m. on August 8.

In lieu of flowers, the family requests that memorial contributions be made to Hidden Harvest of the Coachella Valley or to the Community Presbyterian Church of Cathedral City.