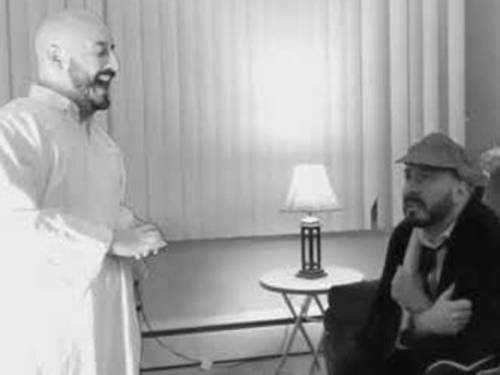 LOUISVILLE — Filmmaker, pastor and presbytery executive the Rev. Ryan Landino closes his most recent “Pastor Ryan’s Sixty Second Sermons” video, which he calls “It’s a Wonderful Church,” with a variation on a well-known line in a certain Jimmy Stewart holiday film standard: “Teacher says every time a church pays its per capita, an angel gets their wings.”

The short film, Landino’s 99th in the series, is enjoying wide play and appreciation among his many Facebook and YouTube fans. Playing both the Clarence Odbody and George Bailey characters in his film, Landino wonders what would have happened if his community  — Geneseo, Illinois, where he was formerly pastor at First Presbyterian Church  — had never seen the birth of the presbytery he now serves as lead presbyter for transformation, Presbytery of Great Rivers, which includes 93 churches in west and central Illinois.

Landino, who’s 36, said he’s been creating short videos since he was a middle schooler. He now shoots them on a smart phone and renders them using free software.

“There is a joy in it, and people appreciate it,” he said. “There’s a freshness there. Once I got the hang of editing, I could turn it around quickly.”

In the film, Landino sees how desolate his community would have become if the presbytery, part of what Presbyterians call “the connectional church,” had never been formed. He wakes up from the vision, rubs his eyes and sees how vibrant the place he calls home really is. Like George Bailey before him, Landino’s character runs around the neighborhood, lovingly greeting landmarks he’d earlier taken for granted.

“It’s easy to forget how vital it is to have intergenerational spaces that offer meaning, love and belonging, how important it is to have a space that nurtures our convictions and channels them into beloved community,” he says in notes attached to his most recent film. “This video is a love letter to the connectional church, our community of churches holding each other up and being held accountable to the integrity of embodying God’s love and justice today, an integrity that is needed now more than ever.”

He notes that Capra’s film has George Bailey’s brother offering a toast to George, “the richest man in town.” In Landino’s version, the faith community toasts “the connectional church: We have everything we need!”

“As we wrestle against shifting resources and the narrative of scarcity, what does it mean for us to practice a theology of sufficiency — that we have enough?” he writes in his notes. “How might that affect our conversations around per capita and responsible giving?”

When Landino was preaching at First Presbyterian Church in Geneseo, he got into the habit of producing one of his “Sixty Second Sermons” each week. He’d screen each new film as part of worship.

“It was such a natural fit in the exegesis process,” he said. “It gave me a way to ask the deep questions.”

He once made a silent film about what it was in his hands that prevented him from carrying Jesus’ cross. “I didn’t speak a single word,” he said, “and it communicated more than a 20-minute sermon.”

Coming from a family of six siblings who grew up in Bethlehem, Pennsylvania, “storytelling and showmanship were part of our family,” he said. “We were all really good storytellers.”

Now that he’s working for the presbytery, the biggest obstacle to producing the 100th film and beyond “is the creative headspace that is required.”

These days, “my mind needs to be in a variety of situations all the time,” he said. “There isn’t the rhythm of being a church pastor, and it’s harder to carve out time. I miss it a little bit, but once every three months or so is a good goal, a good challenge.”

For the current film, Landino gave his wife Danielle — or rather, Danielle’s voice — the important cameo of saying the line about per capita that Capra put in the mouth of George Bailey’s daughter, Zuzu.

“Danielle nailed her line,” Landino said. “I made it a little younger by speeding it up a little.” His wife’s previous appearances, he said, include films where she threw paper airplanes at her husband and held the camera while he was driving and speaking.

In future films, he said he’d like to offer encouragement to Presbyterians to further participate in the PC(USA)’s four Special Offerings.

“Sometimes I just get an inspiration,” he said of his filmmaking process. “They’re born on their own naturally.”