MRTI took criticism it was not engaging with communities to heart. Now that’s core to its mission 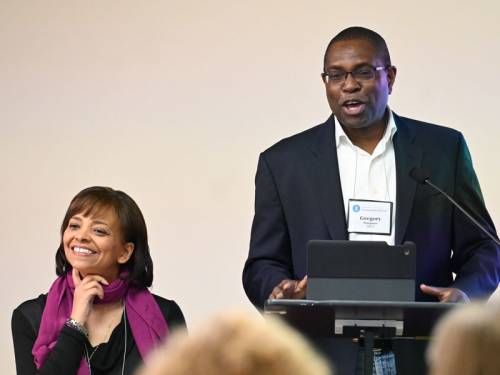 The Rev. Dr. Gregory Simpson, at right, and the Rev. Kerri Allen of the Committee on Mission Responsibility Through Investment speak to the Presbyterian Mission Agency Board Thursday about efforts to better engage communities. (Photo by Rich Copley)

STONY POINT, New York — The members of the Committee on Mission Responsibility Through Investment (MRTI) heard the criticism: While they were making policy decisions about companies that were having a negative impact on the communities around them, the committee members were not engaging with those impacted communities.

“We had to confess that we were not doing that,” the Rev. Kerri Allen, vice-chair of MRTI, said to the Presbyterian Mission Agency (PMA) board Thursday afternoon, the first day of its September meeting. “We went back to MRTI roots which had done that in the past, had been involved in this engagement with communities — where a lot of us who were newer members on the committee didn’t realize that this was part of our history.

Thursday afternoon’s talk, “Cultural Humility Training,” took a look at MRTI’s perspective on environmental racism and justice, now reflected in most aspects of its work, from the way it conducts quarterly meetings to its guideline metrics, scoring companies’ environmental records.

“Environmental racism is now a central piece of what we do at MRTI,” at-large committee member the Rev. Dr. Gregory Simpson said during the presentation. “We have to engage in this actual problem with some amount of forethought in every deliberation.”

That started with looking at some terms that Simpson acknowledged can get a bit murky if you Google, say, “environmental justice.”

In the talk, environmental justice aims to solve problems created by “the confluence of environmental destruction, racism, and poverty.” The aim, Simpson said, is to make environmental protection more democratic, applying the political and ethical question, “Who gets what, why, and in what amount.” They also had to define paternalism, for which they used Merriam-Webster’s language, “a system under which an authority undertakes to supply needs or regulate conduct of those under its control in matters affecting them as individuals as well as in their relations to authority and to each other.”

Environmental racism was defined as “the disproportionate burden of environmental problems that people of color take on,” due to conditions such as substandard housing, living in less-desirable areas, and lacking the resources to get out.

Moving forward, the committee members said they were guided by Reformed theology as well as Presbyterian policy. The focuses on racism and poverty are also clearly in line with the goals of the Presbyterian Mission Agency’s Matthew 25 invitation. MRTI’s guideline metrics scores now include social impacts such as a company’s effect on the neighborhoods surrounding its operations and record on human rights. 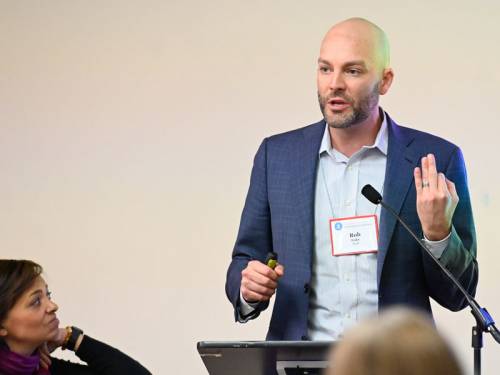 Rob Fohr, director of Faith-Based Investing and Corporate Engagement for the Presbyterian Church (U.S.A.), speaks to the Presbyterian Mission Agency Board at Stony Point Center Thursday. (Photo by Rich Copley)

And as the committee members and Rob Fohr, director of Faith-Based Investing and Corporate Engagement for the Presbyterian Church (U.S.A.) detailed, the committee engaged at two of its meetings this year, visiting with people impacted by climate change in New Orleans and the ravages of living near an oil refinery in Detroit.

Simpson and Allen told the board members tales of floating over stop signs and utility poles in communities around New Orleans and homes devalued down to a couple thousand dollars and residents suffering a wide variety of health impacts from living near a Marathon refinery in Detroit.

They weren’t easy situations to be in and hear about, but committee members acknowledge hearing from impacted communities is vital.

“Each MRTI member has had to have an understanding of what’s going on in the communities that we are talking about” Simpson said. “When you hear the problems and have to make decisions, that’s not easy.”