Mission Responsibility Through Investment engages with community at June meeting 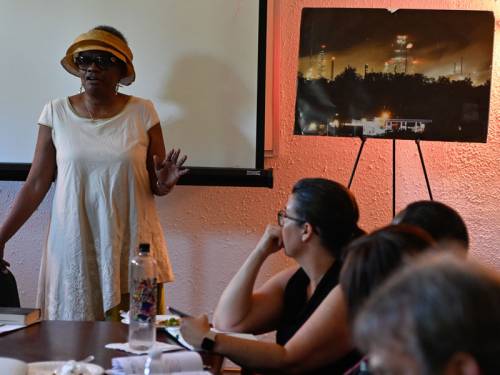 Emma Lockridge shows the Committee on Mission Responsibility Through Investment photos she has taken of the impact of the Marathon Petroleum Refinery on her neighborhood in Southwest Detroit. (Photo by Rich Copley)

“Anytime you hear the siren, that means there could be an explosion at the refinery,” said Emma Lockridge, whose home is just a few blocks away from the Marathon Petroleum refinery in Southwest Detroit.

So, she called Marathon and asked what was going on.

“Nothing,” was the reply, though she looked out of her window and saw, “red, billowing smoke.”

Lockridge decided to jump into her car and document the event on video, bursts of fire and smoke flaring onto the screen.

“See that flare? That’s not supposed to look like that,” Lockridge says in the video. “There is a problem. They’re lying.”

Hopping in your car on a chilly fall night and driving toward balls of fire isn’t how most people would probably react to a situation like that.

“My life’s pretty jacked up already,” Lockridge explained, speaking to the Presbyterian Church (U.S.A.)’s Committee on Mission Responsibility Through Investment (MRTI) at the headquarters of Michigan United, a Detroit organization working for racial and economic justice.

The visit was one of a couple community engagement meetings the committee participated in late last week while meeting in the Detroit area. It also went to Flint to see a special preview of the documentary “Flint: The Poisoning of an American City,” produced by Presbyterian Disaster Assistance’s Story Productions. The committee also met with residents on the front line of the water crisis created by lead poisoning in the pipes.

Rob Fohr, Director of Faith-Based Investing and Corporate Engagement for the PC(USA), the office that supports MRTI, said the committee has been participating in community engagement activities at its last several meetings in response to a directive by the 223rd General Assembly to “listen to the perspectives and voices of people most impacted by environmental racism.”

Fohr said the directive was not addressed specifically to MRTI, but MRTI leadership felt it was important to follow it.

The Rev. Kerri Allen, vice-chair of MRTI, says the committee had been critiqued for not engaging with people in communities impacted by environmental racism.

Allen said it has been important to ask communities they meet with what they would have the committee do, and that what they learn at each engagement is incorporated into the committee’s decision-making.

A 2017 NAACP report, “Fumes Across the Fence-Line,” concluded that air pollution from oil and gas facilities disproportionately impacts communities of color. 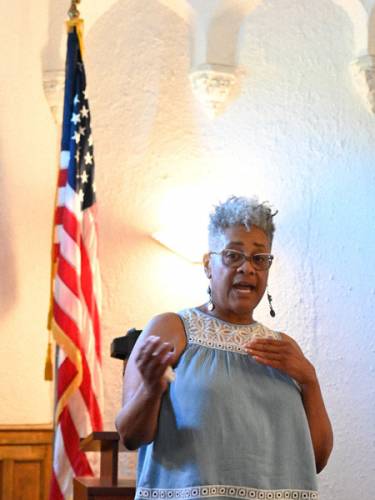 Wendy Kyles talks to the Committee on Mission Responsibility Through Investment about how the Marathon Petroleum Refinery in Southwest Detroit has impacted her life and home. (Photo by Rich Copley)

In Southwest Detroit, MRTI met with Lockridge and her lifelong friend Wendy Kyles to hear about the struggles of residents in their predominantly black neighborhood living within blocks of the massive refinery that dominates the landscape if you are driving down Interstate 75, out of the city.

According to the women, living so close to the refinery has caused health problems, degraded the quality of life and caused scary situations, such as alarms and fireballs in the dead of night.

“We don’t have one illness, we have multiple, multiple illnesses,” said Lockridge, who has suffered kidney failure and has non-Hodgkin’s lymphoma and respiratory issues. In her own family, Lockridge’s sister died of kidney failure before the age of 50, and she recalls how her mother had wads of tissues stuffed into her robe pockets because of constant coughing and drainage. That stopped, Lockridge said, when her mother moved into assisted living away from the neighborhood.

Oil and gas pollutants can also cause ailments such as cancer and asthma, to name a few. 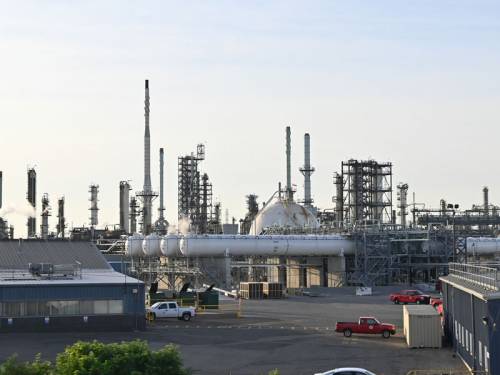 A portion of the Marathon Petroleum Refinery in Southwest Detroit. (Photo by Rich Copley)

Day-to-day, the residents deal with the refinery smells and black film they say covers everything near the refinery. They also experience phenomena such as thermal inversion in the colder months, which keeps toxic clouds close to the ground, around their homes. Then there is the constant traffic of tanker trucks, pulling into the refinery to reload and then rumbling out, past the community center.

“It was very hard to hear,” said Allen, the MRTI vice-chair. “It’s painful to listen to how egregiously they have been treated and disregarded as human.”

The University of Michigan called 48217 the most polluted ZIP code in the state. The refinery has been hit by 13 violations from the Michigan Department of Environmental Quality since 2013. According to the Detroit Metro Times, Marathon has usually explained away the citations by disputing the testing methodology or blaming the violations on weather or contractors. The Southgate, Michigan-based News-Herald reported that Marathon claimed the flaring Lockridge documented on Oct. 29 was part of routine maintenance, though she and others don’t believe that, noting the sirens and that some contract employees were evacuated from the facility.

At the Presbyterian Church (U.S.A.)’s 223rd General Assembly in June 2018, Marathon Petroleum was identified as one of nine companies for focused engagement by MRTI, using its new guideline metrics, which include a clear set of environmental expectations for companies.

“Since the 223rd General Assembly directive, we have contacted Marathon multiple times and they are the one company that has not responded to us,” Fohr said.

Like many residents of the area, Lockridge and Kyles grew up in the Boynton neighborhood in houses their parents bought when the refinery was the much smaller Aurora Gasoline Company.

During the visit, they took the MRTI committee members to see the neighborhood. On the blocks closest to the refinery, many houses are boarded up and some are in various stages of collapsing. There are lots that have been “greened out” as the homes have been removed, and overgrowth is rampant. 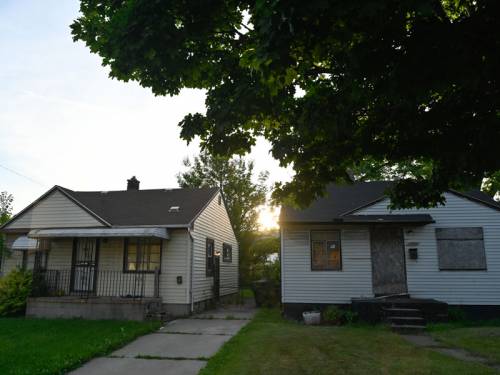 Wendy Kyles’ parents purchased the home on the left in 1953. She says it is now uninhabitable and valued at around $2,000. (Photo by Rich Copley)

At one point, the bus slowed, and Lockridge pointed out Kyles’ childhood home, now uninhabited. Like many properties in the neighborhood, the value of Kyles’ home has dwindled to a few thousand dollars. That puts many residents in a tough spot: they’d like to move, but they don’t have the money to, and for the most part they can’t sell their homes, though some are being sold to people for whom a house in the shadow of a refinery is all they can afford.

“None of this makes any sense to me,” Kyles said, “and it saddens me to my core that the house that my parents were so happy to be in, I can’t do anything with it.”

She says her daughter stayed in the home off and on until April, developing a cough while she was there. Within a couple weeks of moving to Atlanta, Kyles says her daughter’s cough was gone.

“As we were touring, I was thinking I would love for Marathon executives to live in these houses for a while, to see if it was acceptable for them — knowing that it wouldn’t be,” Allen said. “If it’s not for them, then it shouldn’t be for these families.”

Emma Lockridge said the children in her neighborhood are why she is fighting Marathon Petroleum. (Photo by Rich Copley)

Lockridge and Kyles maintain there is a racial element in the different ways the neighborhoods were treated, and they have taken the protest to Marathon shareholder meetings and the Detroit city council, with some limited success in opening a dialogue with the company.

“I hope something positive will come from all this, and we will be able to have some impact and we will get something for our homes and it will be nice and green, like on the other side of the tracks, because that’s what needs to happen,” Kyles said.

During the ordeal, Lockridge has documented the refinery and the community in photographs which she showed to the visitors from MRTI. At one point in the discussion, she held up a picture of children at one a demonstration against Marathon.