With guidelines from GA 223, Mission Responsibility Through Investment advocates for action to combat climate change 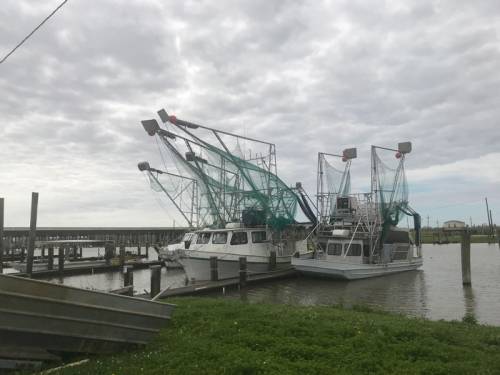 Last month, members of the Committee on Mission Responsibility Through Investment (MRTI) visited southern Louisiana to learn about how environmental degradation has devastated the local fishing industry. (Photo by Mike Ferguson)

LOUISVILLE — The best way to advocate for change with publicly-traded corporations is to have direct access to high-level leaders, says Rob Fohr, Director of Faith-Based Investing and Corporate Engagement for the Presbyterian Church (U.S.A.).

When it comes to engaging with corporations on environmental and climate change -related issues this proxy season, Fohr says he and the Committee on Mission Responsibility Through Investment (MRTI) have had the tools they need to set expectations with corporate representatives and clearly articulate the church’s positions , thanks to the 223rd General Assembly, which took place last June.

Prior to that meeting, MRTI had only a paragraph of official policy to work from, as directed by the 222nd General Assembly in 2016, when engaging companies about environmental issues during the annual decision-making that make up proxy season. To implement this policy, MRTI had to create a set of Guideline Metrics, which were affirmed by the 223rd GA in a 332-178 vote. This effectively created the first-ever environmental screen for the committee, allowing it to clearly communicate environmental expectations.

Fohr says it took about a year of meetings and consultations with stakeholders and partners for the committee to create the environmental, social and governance framework which includes 40+ criteria it could take to companies to show them how they were being evaluated. Those standards include “efforts made to limit temperature increase to 1.5 degrees Celsius” and “evidence of more rapid integration of new technologies designed to reduce the company’s overall carbon footprint.”

“The GA directive has helped MRTI communicate a sense of urgency with companies and Presbyterians,” Joseph Kinard, chair of MRTI, says. “The metrics have been a helpful tool for our engagements because business representatives know exactly what we are looking for and how they will be evaluated. It’s also a unique tool among our secular and faith-based investing peers.”

The Guideline Metrics also give MRTI a clear set of criteria it can relay to Presbyterians who are concerned about the environmental responsibility of the church’s investments and those who work in industries that may be affected by the church’s decisions about investing in them.

Not surprisingly, Fohr says he spent a lot of time in Texas recently. Conversations there have included explaining the process to Presbyterians, many of whom are connected to the energy industry.

“It’s very important that we clearly communicate the GA directive and MRTI’s process of implementing it,” Fohr says. “Hopefully all can see the process has integrity, even if some may not like the outcome.”

In prioritizing the Guideline Metrics criteria, MRTI solicited feedback from groups including Faithful Action on Climate Change and Fossil-Free PC(USA) to help hone the scoring process.

“They really helped us think through the prioritization of the metrics,” Kinard says. “They made the process better.”

In addition to corporate engagement, the MRTI committee has held recent meetings with frontline communities such as south Louisiana focusing on issues such as environmental racism and climate change. 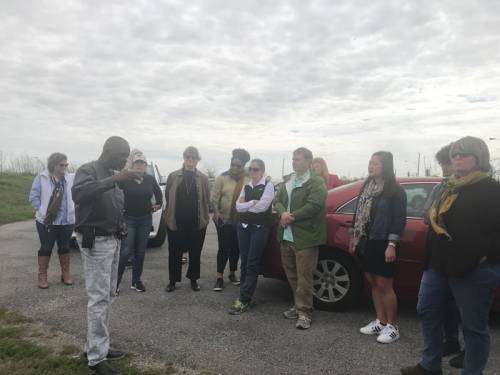 The Rev. Tyronne Edwards, pastor of Zion Travelers Baptist Church in Plaquemines Parish, Louisiana, briefed the Committee on Mission Responsibility Through Investment on environmental degradation and climate change during a March visit to southern Louisiana. (Photo by Mike Ferguson)

Rev. Kerri Allen, vice-chair of MRTI, says, “In the past, MRTI has been criticized for not hearing from those who are disproportionately impacted by climate change.  Responding to that fair critique, and to the prophetic directive from the GA on environmental racism, we have prioritized hearing from the voices of frontline communities who are directly impacted by climate change and environmental degradation. We have listened to their stories and we are actively strategizing on how to incorporate and center these voices in our engagements and process.”

At GA last year, nine companies were put on a watch list for environmental issues including ExxonMobil, Chevron and Ford. Fohr says the success of the implementation of the screen has shown in MRTI’s work with those companies since June. Nearly all of the companies have since directly responded to letters MRTI sent communicating the GA directive — and MRTI representatives expect to meet personally with all nine companies and talk about the Guideline Metrics by the end of the proxy season on June 30.

The ultimate protest to companies that don’t meet standards is to put them on a divestment/ proscription list that MRTI updates every year.

MRTI regularly tries to dispel a perception that divestment is the primary goal of the committee, though there are some people within the PC(USA) who would like to see broad divestment from industries such as fossil fuels. Fohr regards divestment as “an important tool, but the last tool used by shareholders,” pointing out that divestment essentially means the committee couldn’t get the company to move toward compliance with the General Assembly standards. When MRTI makes a divestment recommendation, it essentially says it will cease engaging with that company and shift resources to more productive engagements.

Fohr says the committee has been able to get the ears of multinational corporations because “the church, through its investment agencies, owns shares of those companies, and through the work of our primary investing coalition partners, the Interfaith Center on Corporate Responsibility and Ceres.

He also says MRTI has been able to wield influence through its work with Climate Action 100+, “a relatively new investor initiative to ensure the world’s largest corporate greenhouse gas emitters take necessary action on climate change,” according to its website. The group represents more than $33 trillion of assets under management or one-third of the world’s investment capital.

In addition to the nine watch-list companies named by GA 223, MRTI has had meaningful dialogues with other companies this proxy season, and in 80 percent of the cases, the committee’s proposals have been withdrawn because of significant commitments by the companies, Fohr says.

Some of those included holding a meeting between MRTI representatives and executive leaders of  AIG Insurance resulting in the company making commitments regarding climate risk and persuading the Hub Group, a trucking company, to augment its human trafficking  prevention policies and training, and Southwest Airlines to adopt a comprehensive human rights policy.

“We measure success in commitments by companies,” Fohr says. “We want to negotiate a commitment that’s doable for them and significant for us — moving the needle, so to speak.”