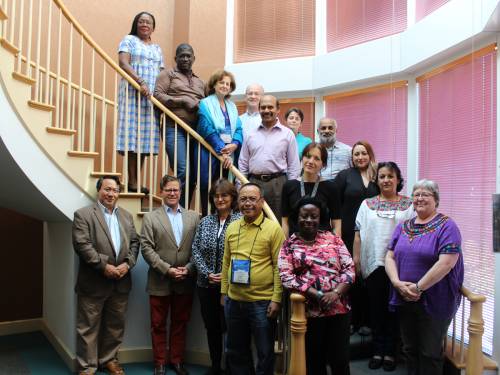 International Peacemakers gather on the campus of Louisville Presbyterian Theological Seminary to debrief on their three-week visits across the U.S. (Photo by Rick Jones)

LOUISVILLE — The meeting room at Laws Lodge on the campus of the Louisville Presbyterian Theological Seminary was buzzing with groups clustered together, debriefing on the past three weeks. Most of the 15 international peacemakers gathered here for a day of conversation before heading back to their homes, an opportunity to talk about their experiences and interactions with U.S. congregations, students and communities.

“We really had great conversations, very deep, thoughtful and critical,” said Paola Schellenbaum of Italy. “I realized how diverse our countries are and how much we shared in terms of challenges such as refugee issues.”

Many say they were surprised by the positive responses they received in their interactions.

“The PC(USA) is more justice-oriented and socially conscious. The church is very concerned about climate justice issues and pastors in the communities are really engaged and highly aware,” said Herman Kumara of Sri Lanka. “This was encouraging and interesting for me. I never thought it would be.”

Mphatso Mary Nguluwe of Malawi said she often took for granted that all people knew the trials facing her country.

“Going through presbyteries, I found that most people were not aware of what is happening in my country. It was an eye-opener,” she said. “We judge people, thinking they are not willing to help, but most of the time it is because they did not know. I was very pleased when they showed an interest in what I had to say and often asked how they could help.”

Phares Nyaga Mithamo of Kenya says the reconciliation of human beings is important for the world to survive.

“People were really sensitive to the issue of peacemaking. The people I spoke with are experiencing the absence of peace and everyone seems to be worried,” he said. “I see people willing to deal with issues facing this country in order to build peace.”

Nora Carmi of Palestine found a warm reception everywhere she spoke and she credits the church’s long history of addressing social justice issues.

“I realize that the PC(USA) has been supporting the Palestinian cause since 1948. Keeping their principles has not always made them very popular,” she said. They still face challenges, but the Peacemaking Program is an important ministry. Many in the presbyteries I spoke to do not know enough about the program. There needs to be more education here.”

Lydia Cordero Cabrera of Mexico says being an international peacemaker was one of the best experiences of her life.

“I was worried that since I came from Mexico, I would not be heard. However, I didn’t have problems presenting issues going on in my country,” she said. “I also found a lot of people were receptive to what Mexico is facing. I also encountered a lot of my audience, especially young people, who asked what they could do to help.”

“Many that I spoke with do not know about our country and when we speak about things happening there, they are very interested and attentive,” said Pek Muan Cuang of Myanmar. “I invited them to come see us in our country. It would be good if there was a way to make that possible.”

Ebun James-DeKam of Sierra Leone says she was surprised by the age and size of congregations she spoke to.

“The structures and facilities were big, but the congregations are smaller and older,” she said. “It touched my heart that these smaller churches were making it possible for us to come here and speak.”

Having spent time with communities, many of the speakers say they have become familiar with the diversity issues the U.S. has been dealing with. Samuel Javaid Ahktar of Pakistan said the U.S. needs to embrace its diversity.

“It’s a mosaic of ethnicities. The time has come to start thinking in terms of becoming a colored nation with all diversities,” he said. “The immigrants coming to this country bring with them the gifts that they have and they want to share them. If allowed, they can become settled in little time, contributing to the economy.”

“We have some differences and stereotypes among us, but during my visit in the U.S. I felt we were one as Christians,” said Alla Soroka of Ukraine. “Yes, we come from different countries — the Ukraine, Palestine, Italy, and other places — but in this moment, we are Jesus’ body and I felt it here.”

Delia Leal of Guatemala says it’s important that the messages shared among the churches be passed from generation to generation.

“There were grandparents, fathers, mothers in the audience. They must pass the messages we shared for the new generations to come,” she said. “It is time to go outside the four walls of the church.”

Carmi says all countries should approach each other with a sense of humility.

“Even powerful countries are vulnerable and no superpower should depend only on force. When I saw the Vietnam Memorial and I think of thousands of soldiers dying for the prestige and power of the U.S., I cried,” she said. “There are things much more important than military power. We need to get back to moral values. There is no one greater than God.”

“For the presbyteries I visited, there is the impact component. What is the impact of the Peacemaking Program?” asked Jerome Baris of the Philippines. “We must always work to improve the program to ensure the internal and external impact. How are we as a church impacting life in our own nations and the U.S.?”

Since 1984, more than 300 international peacemakers from more than 50 countries have been hosted by Presbyterian organizations.