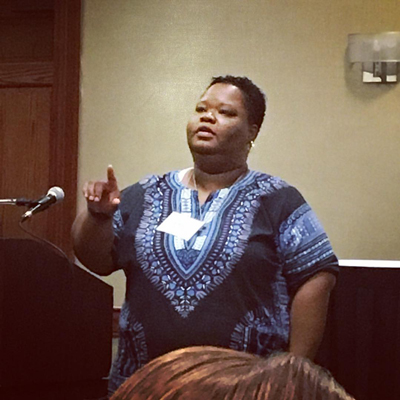 LEXINGTON, Kentucky — Toward the end of the Rev. Shanea Leonard’s Gender & Inclusion presentation Tuesday, they presented a slide with puzzle pieces scattered apart on the left and fit together on the right.

The scattered pieces were labeled “diversity” and the finished puzzle was “inclusion.”

“Diversity says everyone is welcome to the table,” Leonard said to the nearly 70 people in attendance at the first virtual Gender & Inclusion workshop being offered by the PC(USA) Office of Gender, Racial and Intercultural Justice. “We’ll celebrate your particular days. We’ll have Black History Month celebrations. We’ll have Latino, and Latina, and LatinX Heritage Month celebrations. We’ll have Gay Pride Sunday. It’ll be great: We’ll celebrate Women’s History Month. We’ll do all those things. You bring your particular food on those days, your particular decorations, and your music and all of those things, and we will celebrate — you will be the star that day. And that is awesome.

“Inclusion says we don’t just want to celebrate you on your day. We want to make your culture a part of the fabric and the core of what we’re doing here. And so, your culture is celebrated in the liturgy. You are represented in the leadership, and at the tables of distinction and decision. We are not just celebrating you on your one day a year, but that we lift you up collectively and together as one, all year long.” 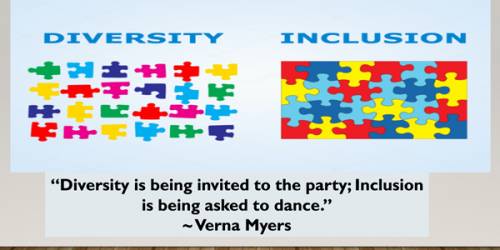 The Rev. Shanea Leonard said the church should be a place of inclusion. (Screenshot)

The church, Leonard said, should be a place of inclusion, and the focus Tuesday was on inclusion of people of all gender expressions. The workshop, Leonard said, was presented to help Presbyterian congregations and faith communities live into policy passed at the 223rd General Assembly “On Celebrating the Gifts of People of Diverse Sexual Orientations and Gender Identities in the Life of the Church.” There will be two additional offerings of the workshop, which Leonard has presented in person prior to the COVID-19 pandemic, in July and October.

Registration is open for two additional offerings of the same Gender & Inclusion session July 13 and Oct. 19. Click your preferred date to register.

“It’s one thing to say it, but it’s another thing to put it on paper,” Leonard said of the church’s position. “And then it’s a whole other thing to enact it. It’s three steps. … All three are important for creating an inclusive environment.”

Gender is one of the most challenging areas for churches to navigate because culture is so oriented to a binary of male and female, Leonard said. The session began with a few “mutual agreements” for the discussion encapsulated in a quote from Drs. Robin DiAngelo, author of “White Fragility,” and Ozlem Sensoy: “Grappling with challenging concepts does not require agreement; you don’t have to agree first before you can consider an alternate framework. [We simply ask people] to be willing to look below the surface to see what becomes visible that was not previously.”

The workshop spent a lot of time defining terms about gender, gender norms, and gender from a biblical perspective.

Gender Identity: How someone internally experiences and defines themselves according to what they determine the options for gender to be​​

Sexual Orientation: Who you are attracted to sexually, emotionally, romantically, and/or intellectually​

Identity, Leonard said, is a combination of numerous factors including beliefs, personalities, interests, and gender and sexual identities.

Transgender: Someone who identifies with a gender, gender identity, and/or gender expression that differs from what was assigned at birth​

Cisgender​: Someone whose gender identity aligns with what was assigned​ at birth​

Intersex​: An individual who experiences biological variants that do not fit categorically into the binary of gender assigned at birth​

Transgender includes numerous gender identities, Leonard said, and does not in itself mean the person has had surgery.

Still, with so many variations, many people see the world through very binary lenses which, a group exercise showed, includes stereotypes that generally categorize men as powerful and women as submissive. There was another manifestation of the binary view of gender over the weekend when musician Kid Cudi, who is viewed as male, appeared on “Saturday Night Live” in a dress as a tribute to late Nirvana singer and guitarist Kurt Cobain, who wore a similar dress on a magazine cover in the 1990s.

“The fact that it made news tells you that we still very much exist in a binary where you can only act in a particular way, you can only dress in a particular way, your life goals have to be shifted towards one thing or the other,” said Leonard, who identifies as non-binary. “But really the reality is many of us push the margins on those binary boxes every single day of our lives. Every time you’re women who are strong and work outside of the home, you’re pushing against that binary thought. Every time you are a man and your spouse makes more money than you or you cry, you’re pushing against that binary box.

Numerous times during the workshop, Leonard said, “Everyone has a right to determine for themselves who they are and how they want to be identified.”

The workshop included a small group time where participants considered a case study of a teenager who was identified as a girl at birth who told his parents that he identifies as a boy. Participants were asked to discuss appropriate ways for the boy’s parents to approach the situation, including with their faith community.

One participant discussed interpretations of biblical texts as being a major source of binary definitions, as the book of Genesis is written in stark terms like man and woman, day and night. But, the participant noted, there was also dawn and dusk, indicating not everything is as clearly defined as we think.

And churches have a role, Leonard said, in reorienting culture from language in Scripture and liturgy to hierarchy to how a church sets up its restroom facilities.

“If we think about the ways in which church in general has excluded people over the years,” Leonard said, “inclusion should be our number one priority.”

The Office of Gender, Racial & Intercultural Justice is one of the Compassion, Peace & Justice ministries of the Presbyterian Mission Agency.