Make A Donation Click Here >
Home › ‘If it matters to Jesus, it should matter to us’

Even gifted preachers ought to seek feedback from the folks in the pews, in places both physical and virtual 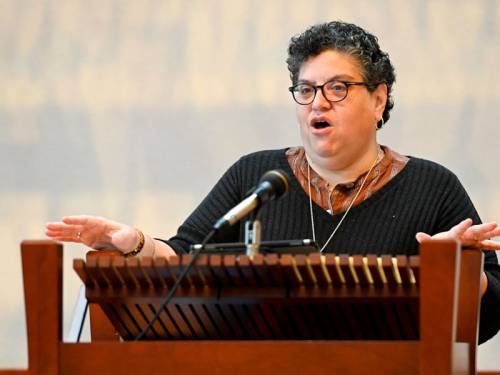 The Rev. Marissa Galván-Valle  is shown here preaching at the Presbyterian Center in Louisville, Kentucky, in 2019. A Wednesday webinar offered by the Synod of the Covenant gave preachers a few tools for seeking helpful sermon feedback. (Photo by Rich Copley)

LOUISVILLE — Wanting to impress on the preachers in his Zoom audience Wednesday the importance of garnering helpful listener feedback following their sermons, the Rev. Dr. Chip Hardwick offered up the words of a very popular preacher from back in the day: Jesus himself.

In John 16:17-18, the disciples ask one another what Jesus’ words mean following a talk they found baffling. “We do not know what he is talking about,” they tell one another. Verse 19 is Jesus’ reply: “Jesus knew that they wanted to ask him, so he said to them, ‘Are you discussing among yourselves what I meant when I said, “A little while, and you will no longer see me, and again a little while, and you will see me”?’”

“He was and is the Word of God, and even Jesus needed listener feedback,” Hardwick said. “If it matters to Jesus, it should matter to us.”

Hardwick is the interim executive of the Synod of the Covenant, which is offering the monthly “Equipping Preachers” webinar to preachers both inside and outside the bounds of the synod. Most webinars feature a guest speaker, but Hardwick handled the duty himself this month. Watch the webinar here.

Because of the surge of the omicron variant many preachers are once again delivering their sermons online, or, at best, to masked hearers seated a safe distance away in the sanctuary. “We can’t tell if they’re smiling or frowning,” Hardwick said. “It’s hard to get feedback, but it’s more important now than ever.”

Hardwick’s doctoral dissertation is on collecting sermon feedback that’s helpful, but he’s also received some feedback that wasn’t. A woman once told him she felt she was “held hostage” by Hardwick’s sermon. Someone else told him, “I’ve needed to hear that sermon for 70 years.”

Owing to something called the Theory of Double Agency, those who hear the sermon have a larger role in finding meaning therein than they might realize. “What is God doing and what are we [preachers] doing?” Hardwick asked those attending the webinar. “There are two agents at work, and we’re not doing the same thing.”

The Second Helvetic Confession reminds us that the preaching of the Word of God is the Word of God. Making it God’s work is the work of the Almighty and not the preacher. “You can’t preach a bad enough or a good enough sermon to make it God’s Word. God is the one who does that,” according to Hardwick.

God and the preacher “are doing distinct tasks during the preaching event. We don’t go into a trance. We figure out what the text says and how it connects to listeners. The Holy Spirit is doing things in you and through you to inspire you,” Hardwick told the gathered preachers. “You can’t say God is doing the exegesis for you.”

In the end, God and the preacher are doing distinct tasks during the preaching event — at the same time.

Also at the same time, similar work is going on within the listener.

“If the listener is to really hear God’s Word, it’s God’s work, not the listener’s,” Hardwick said. Even a listener who uses the sermon time to jot down a shopping list “cannot keep God from speaking.”

Hardwick touched on two models for how the process works — the Sovereign Model and the Roundtable Model — before arriving at his preferred model, the Servant Model. God is at the head in this model, with the listener and preacher “in fellow service to the Word as they participate in their respective roles in the preaching moment. God is at work in both,” Hardwick said. “We think of preaching as being up to the preacher, but the listener can do an important job too.”

God wants preachers to use their rhetoric to connect with listeners, but it’s the listeners who determine if that rhetoric connects with them. The seniors in the congregation “get to decide if I’m preaching too quickly,” Hardwick said.

Preachers are wise to being open to feedback, “since God is at work in listeners too,” Hardwick reminded. It’s also important, when possible, to point out to listeners when you as a preacher have incorporated their feedback, he said.

Hardwick encouraged the preachers on hand to urge listeners to offer them coaching, not judgment. Rather than hearing “Good sermon” or some such at the door on the way out, it’s more helpful for the preacher to hear, “That illustration you told about your grandmother helped me understand the depths of God’s love for me,” Hardwick said.

One workshop participant recalled picking up the used bulletins from the pews following worship one Sunday. She discovered meticulous notes someone had taken during the sermon “that were absolutely incredible but had no relationship with what I had said. Clearly God had intervened between my mouth and God’s ears and given them what they needed to hear.”

Preachers seeking feedback from listeners can ask them any number of questions, Hardwick said, including these:

One workshop participant talked about “Sermon Back and Forth,” a small group that meets Tuesday evenings in a bar “to talk about Jesus and what he is doing through the sermons.” Sometimes people seated nearby find themselves eavesdropping on — and even participating in — the conversation. The preacher sometimes tells those people, “If you want to hear what we’re talking about, there’s the church right over there,” he said, pointing nearby. “We talk about what’s going to stick with you down the road.”

“‘What will stick with you?’ is a great question,” Hardwick said.

Seeing which stories “cause people to light up and which ones don’t do so well has helped me craft my sermons,” this preacher said. One ruling elder appreciates looking ahead at the scriptural texts for the following Sunday. “He chews on it and is even more informed the following week,” the preacher said. “They get a little giddy sometimes.”

The Rev. Dr. Luke A. Powery, the Dean of the Duke University Chapel and an Associate Professor of Homiletics at the Duke Divinity School, will speak on “Preaching in the Valley of Dry Bones” during the next edition of Equipping Preachers, which is scheduled for 10 a.m. Eastern Time on Wednesday, March 2. Learn more here. Register here.