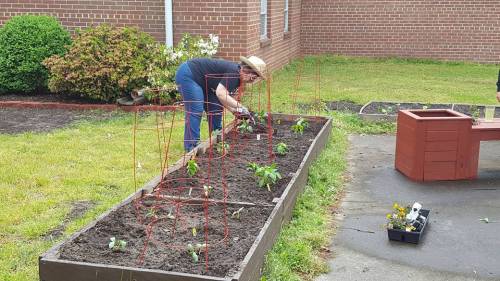 Hunger Action Advocate Jessica Fitzgerald tends to a vegetable garden at her church in the Presbytery of Eastern Virginia. (Photo by Ray Fitzgerald)

LOUISVILLE – If Jessica Fitzgerald asks your church to get involved in hunger and poverty issues in your community, be prepared to say yes. No is not an answer she will accept. Fitzgerald is the Hunger Action Advocate for the Presbytery of Eastern Virginia. It’s one of many hats she wears for the presbytery and she’s gotten quite good at it the past five years.

“I mainly encourage churches to work in hunger and outreach ministries. Some are doing food pantries, some are partnering with other denominations close to them,” she said. “We don’t always have enough people to manage a project so why not work together? We must have an open mind to partnering with other churches in the community.”

A few of the churches in the presbytery support the local food bank mobile pantry while others operate their own pantries. There are churches, according to Fitzgerald, that grow their own food.

“We have at least 15 churches in the presbytery that have their own gardens, some are small while others are quite large,” she said. “The bigger gardens produce a lot of vegetables through what they call a ‘Giving Garden,’ giving the food away to those who need it. It’s been amazing to watch.”

Fitzgerald, who is a member of Third Presbyterian Church, has taken on the job of creating a garden at the church, and, like others, gives the vegetables to those in need.

“We at Third Presbyterian wanted to do something a little different. We use recycled pallets to make boxes or create benches with planters in them,” she said.

One of the hardest things Fitzgerald has seen is the number of active duty military families that come to the food banks. She says approximately 45 percent of those who collect food stamps or seek food are enlisted individuals who have two or more children. The families live on one income while one spouse stays home with the children to save on childcare costs.

Fitzgerald says the Southeastern Virginia Food Bank has served over 15 million meals to those struggling with food insecurity over the last year, including more than 60,000 children. She adds the Virginia Peninsula Food Bank has distributed 10 million pounds of food to residents struggling with hunger across the greater peninsula in the last year.

“The biggest struggle I have is hearing churches say they are too small and can’t do anything to help. I don’t accept that. It’s not an answer,” she said. “There’s got to be another church nearby that wants to do something and needs help. You’ve got to partner and do it together.”

Fitzgerald credits the Presbyterian Hunger Program and interaction with other Hunger Action Advocates for inspiring her in the work.

“That relationship is very important, especially when I’m frustrated and don’t know where to go,” she said. “It’s a good sounding board to connect with other people in the denomination doing the same thing or have the same passion for this work. The resources are great and it is encouraging to know the church is praying for me.”

“Hunger Action Advocates are a vital part of the PHP’s local work as they serve presbyteries as educators and motivators,” said Jessica Maudlin, associate for Enough for Everyone, Presbyterian Hunger Program. “Jessica is a great example of how Hunger Action Advocates assist congregations and other groups to become engaged with the hunger needs in their own communities, while at the same time connecting congregations to the broader church around topics like hunger-related development assistance, public policy advocacy, lifestyle issues and environmental justice.”

The Presbyterian Hunger Program works with Hunger Action Advocates in 30 presbyteries across the U.S. The HAA position is funded through a matching grant to presbyteries from PHP as a part of educating and connecting Presbyterians to local hunger work in the presbytery and PC(USA)’s national and global work addressing hunger.

Find theHunger Action Advocate closest to your area and give today to support the work of Presbyterian Hunger Program to bring hope to communities and individuals struggling against hunger.