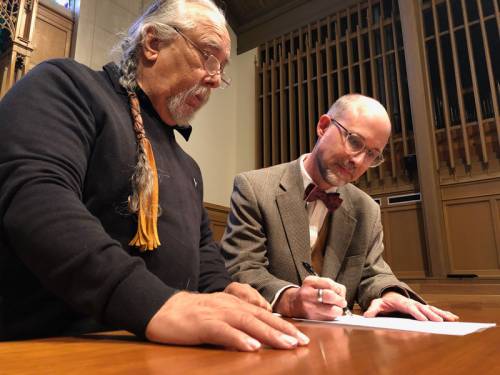 WHITE PLAINS, New York — It was upon the communion table where, through God’s Spirit, ordinary means are transformed for extraordinary ends, that on November 20, Hudson River Presbytery transferred the title of the former Stony Point Church and all its property to the newly-created Sweetwater Cultural Center “to promote the education, health and welfare of indigenous or native peoples and to preserve their cultures and ceremonial practices locally, regionally, and around the Western Hemisphere.”

View a brief clip of the signing ceremony here.

“This gift is a pledge of partnership with our Native American neighbors that we will walk into God’s future together,” said Deborah Milcarek, general presbyter of Hudson River Presbytery.

“This gift has the potential to change everything,” said Chief Dwaine Perry of the Ramapough-Lenape Nation, the co-chair of Sweetwater Cultural center. The Ramapough-Lenape Nation’s land encompasses parts of New Jersey as well as New York, where Hudson River Presbytery is located. “We are breaking new ground when Christians take real action to make amends for the harm that has been done to Native American and Indigenous people. There are no words of wonder that can express the gratitude which I feel toward the presbytery; knowing this gift has come through a profundity of thought, giving birth to a global realization of humanity.”

The transfer was the culmination of months of discussion within the presbytery and with Native American leaders in light of the presbytery’s commitments to “helping the congregation (Stony Point Church) distribute financial assets in a way that will honor the congregation’s legacy and commitment as a progressive, theologically grounded presence in their community,’” furthering the church’s ministry and mission through assets of congregations that have closed, and reckoning with the 222nd General Assembly’s repudiation of the Doctrine of Discovery. In 2016, General Assembly commissioners  renounced the Doctrine which, in the name of God, claimed the lands of indigenous peoples for European colonization. In 2018, the Assembly called on the PC(USA)’s congregations, mid-councils and national staff to enter into dialogue, strategy and action with indigenous people of the region as part of a process of confession and repentance to redress wrongs.

“This land return is profound for those of us who are Natives given that we’ve lost so much: so much history, so many of our ancestors, so much of our culture and many of our tribes have lost our languages,” said Dee Ellenwood, a ruling elder at White Plains Presbyterian Church in Hudson River Presbytery and a member of the Nez Perce Tribe. “It does bring a lot of heartache to think of how much our ancestors have suffered and sacrificed, so to see some land being given back is beyond words. It’s something I wish my grandparents could have heard of, could have seen. I shared the news of the presbytery’s decision to give the property to Sweetwater this past March with my mother who was so grateful to hear of it. And we talked as a family about our Nez Perce lands in Oregon that have not yet been returned and what it would mean for us to have that land back among our people. My mother died in June, but she died knowing of the presbytery’s action and Sweetwater’s mission. I give God the glory for all that is being done.”

Chief Clara Soaring Hawk, Deer Clan chief, ambassador of the Ramapough-Lenape Nation and co- chair of the Sweetwater Cultural Center board of directors, said, “With much gratitude and respect for the presbytery’s gift of the Stony Point Church property and all that this historically represents, I am honored to be a part of such a monumental undertaking. With Sweetwater, we are creating a place to advocate for the rights of Indigenous and Native peoples and their allies; a place to educate non-Natives of the truth of reality as it has been known (lived) by our ancestors years past, up to present day; and a place to preserve and protect the culture and practices of ceremonies among the Native and Indigenous Peoples. This is genuinely a momentous occasion for us all. A’ho (Thank you)!” 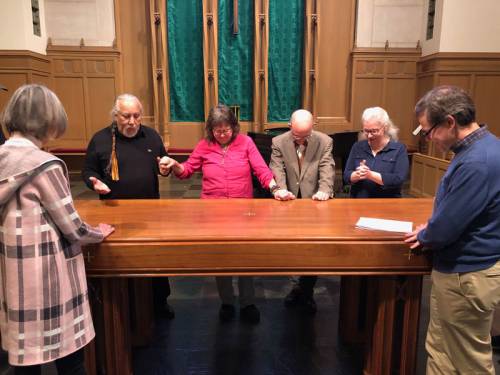 As the soft afternoon light filled the sanctuary of White Plains Presbyterian Church, the small group of leaders representing the presbytery, the administrative commission of the Stony Point Church and Sweetwater joined hands around the communion table and prayed for the role that Sweetwater will have in the preservation of Native culture and ceremony regionally and in the Western Hemisphere; for the educational programs Sweetwater would offer Native and Indigenous peoples and their allies; for the nurture of right relationship with the land; and for the sweetness of the moment in which Native tribal communities and the Presbyterian Church, affirming one another as partners, are writing a new chapter in history together. 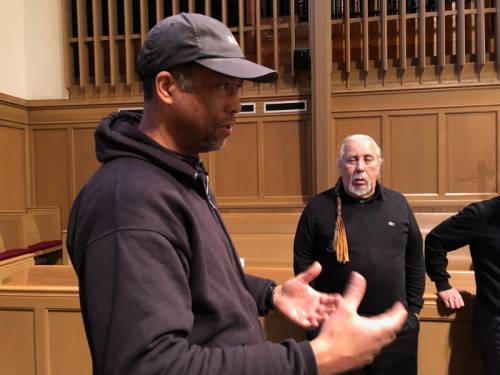 Owl, whose English name is Steve Smith, an attorney and member of the Ramapough-Lenape serving on Sweetwater’s board of directors, explains his family’s deep connection with the Presbyterian Church. (Contributed photo)

Upon lifting his head from prayer, Owl, whose English name is Steve Smith, an attorney and member of the Ramapough-Lenape serving on Sweetwater’s board of directors, said, “You may be interested to know that my great-great-grandfather was among the founders of the Brook Presbyterian Church in this presbytery. It is a very deep connection that I and my community have with the Presbyterian Church. And with the birth of Sweetwater, that connection deepens and grows.”

By design, the board of Sweetwater Cultural Center, which has a majority membership of Native or Indigenous persons, includes seats for at least two representatives of Hudson River Presbytery for the next 10 years. This long trajectory of participation allows Presbyterians to continue to be partners in the adventure of Sweetwater and its ground-breaking work. That Sweetwater will be a site for continued worship and advocacy has many in the presbytery excited for how their congregations can participate in this adventure.

The Rev. Stephany Graham Walker, pastor of Peekskill Presbyterian Church, said she’s honored to be representing Hudson River Presbytery on Sweetwater Cultural Center’s Board. She said members of her church are excited to imagine what it could mean to be friends and partners in this new ministry. “There is much to learn and a lot of work to be done, but I am fully engaged with heart and hands,” she said.

Pastors of churches in Rockland County where Sweetwater is located are equally energized.

“I’m excited this is happening in our county,” said the Rev. Angela Maddalone, Pastor of Palisades Presbyterian Church, who is anticipating the opportunity for exchanges at Sweetwater that will deepen understanding and relationships. “This demonstrates, especially to young people, that the church does care and is making a difference on matters of real importance. With this small step we are participating in acknowledging and repairing harm that has been done to Native cultures and building a new future together. What a moment!”