Many express desire to continue relationships with speakers

LOUISVILLE – The 2017 international peacemakers, who spent four weeks speaking across the U.S., have returned to their homes. But the impact of their visit is still being felt by presbyteries, churches and communities where they spoke.

Several hosts recently discussed their experiences with Carl Horton, coordinator for the Presbyterian Peacemaking Program. The hosts said they were personally moved by the stories and experiences of the 15 peacemakers. 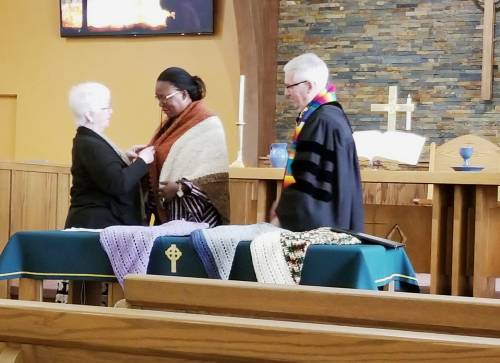 West Virginia Presbytery hosted Ebun James-DeKam from Sierra Leone, who shared about recent flooding and mudslides in the city of Freetown, which is believed to have killed thousands of people in the west African country. Tina Vial with Davis and Elkins College, a Presbyterian-related institution, says students could relate with the disaster.

“About 25 to 30 students attended and asked good questions. So many students haven’t been out of West Virginia and were quite moved by Ebun’s story,” said Vial. “Because of recent flooding in Sierra Leone, it was a way that the students could connect because of the flooding here last year.”

Vial said school leaders are hopeful they will be able to schedule their own trip to Sierra Leone in the coming year.

“I challenged Samuel to conduct a Christian/Muslim dialogue. Samuel answered questions from the Christian viewpoint and an Allentown man answered for Muslims,” said Clever. “It was nice to have both of them converse with one another. A Syrian Christian asked pointed questions about Islam and it was interesting that both men joined to talk about peace.  It was very moving to see the two of them address this together.” 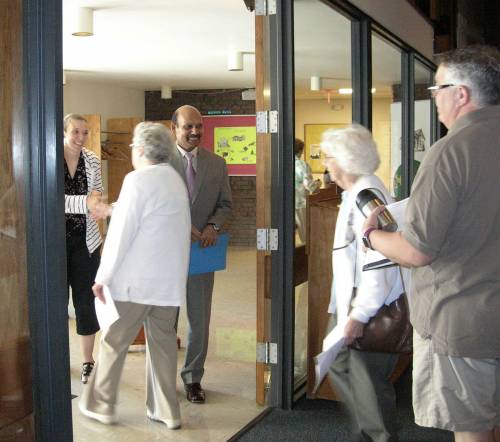 Clever says Akhtar’s personal accounts gave her audience a better understanding of his life and challenges.

“It was really nice listening to how Samuel talked about his own country. We did some reading ahead of time and provided some background on Pakistan for students in attendance,” said Clever. “What we got out of reading was minimal compared to what Samuel shared with us. It was a totally different story on how he viewed Pakistan. Incredibly insightful.”

“Seeing a person from another country at our church is invaluable,” said Sandie Hanna with Missouri River Valley Presbytery in Omaha, Nebraska. “Nora Carmi’s presentation on life in Palestine, brought a lot of people to Sunday school and we ended up moving the presentation to the sanctuary to accommodate the crowd.”

“It’s a stereotype we need to fix.  There were a few things Ebun talked about that not only highlighted the equality of humanity, it also showed how far ahead the people are in Sierra Leone,” she said. “There are many things they do better in community than we do here today.”

Barbara Chalfant, associate presbyter for Missions with the West Virginia Presbytery, agreed saying she traveled to several communities with James-DeKam during her visit. 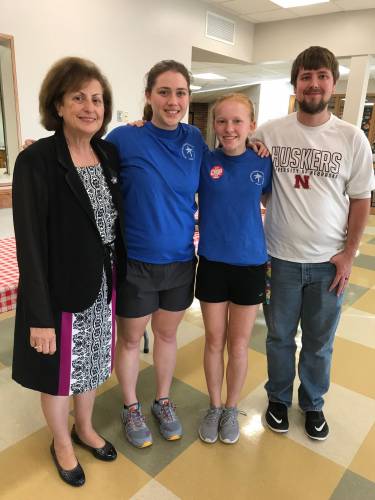 “Ebun said that in their country, there is no word for aunt, uncle or cousin and that everyone is called mother or father,” she said. “It pulls your neighbors closer in terms of how you see them. It is common for a child on the street to approach you as mother or father. I found it interesting the way vocabulary is used to pull each other together into community rather than to push them apart.”

“We were expecting to hear about the persecution of Christians in Pakistan, but Samuel Akhtar had a different story of how Christians and Muslims get along and how they’ve lived in peace for a long time,” said Denee Stevenson of Beaver Butler Presbytery in Zelienople, Pennsylvania. “That was a different viewpoint than what we were expecting.”

Most of the group told Horton they would like to see some of the same peacemakers return next year. The group added that it would welcome the opportunity to provide input regarding the countries of most interest to their presbyteries for the future.

“I’ve worked with this program for many years from national staff and in the field. Every single time there is some connection across the world that doesn’t happen otherwise,” said Vial. “It makes our world smaller and more personable and relational in today’s climate.”

International peacemakers have been speaking in the U.S. since 1984. During that time, more than 300 have traveled to communities.