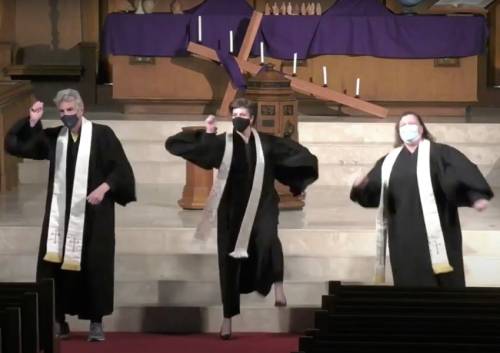 LOUISVILLE — In the spirit of the Easter season, First Presbyterian Church in Greensboro, North Carolina has put together its first ever dancing music video. After an opening shot of the church’s Gothic Revival cathedral in the city’s historic Fischer Park District, pastors Jill Duffield, Dolly Jacobs and Neil Dunnavant are shown dancing in their robes to the music of “High Hopes” by “Panic! At the Disco.”

The idea came from Jacobs. When she saw this story in late February about nuns dancing at a monastery in locked-down Ireland, she sent an email to FPC staff suggesting they do something similar.

“Given how challenging a year it has been, it seemed like a good idea — the right thing to do, especially in this season,” she said. “I thought it would make our congregation and even our community smile.”

Wanting the video to be ready for the church’s Easter Sunday morning online service, which was only a month away from Jacobs’ suggestion, the staff began to brainstorm. Once worship and music coordinator Anne Albert chose “High Hopes,” they began to map out different places where the congregation could dance and who might be willing to participate.

Since the video debuted at 11:30 a.m. on Easter Sunday, at the exact moment the congregation would’ve been coming out from worship and filled with joy of the resurrection, the video has been viewed more than 1,800 times. 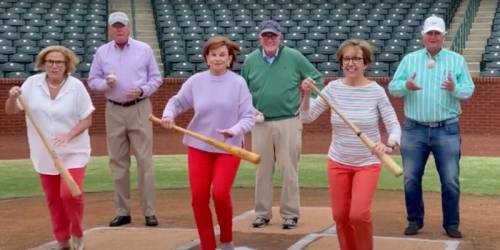 When Suzanne Tilly (second from right) heard they’d be dancing to “High Hopes” at the Greensboro ballpark, she thought of the Frank Sinatra song. (Screenshot)

Suzanne Tilly danced with a group of women and their husbands at the downtown ballpark where the Greensboro Grasshoppers play their home games, First National Bank Field. When she and her husband Tom were asked to participate in dancing to “High Hopes,” they both thought of the Frank Sinatra song of the same name. When the group got together to listen to the version by Panic! At the Disco, she experienced a little bit of panic herself.

“The music was so fast, our group decided to start off with few choreographed steps and let the rest be impromptu,” she said. “When the day of taping came, we did a few of our steps and then did a lot of laughing and jumping around. Afterwards we joked about making fools of ourselves, but how much fun it was to do it together.”

In all, more than 80 people in 15 groups danced at various places in the church and around Greensboro. The clergy choreography was done by Albert and her daughter using the Just Dance Video Game. All of the scenes of the groups of First Presbyterian Church members dancing together were edited and mixed together by the church’s information technology director, Jennifer Gaddy. 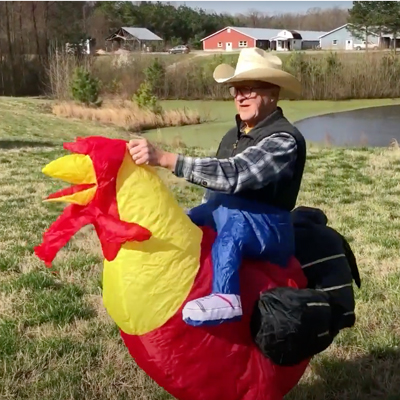 Dan Kerns, a member of the First Presbyterian Church’s Chancel Choir and a farmer, participates in the dance video to help church and community members smile a bit and celebrate Easter, even during the pandemic. (Screenshot)

“I had a sense before I came here [in December 2020] that this congregation had a winsome and fun side,” Duffield said. “We have a majestic beautiful sanctuary, but we aren’t stuffy. We are real and this video revealed to me that we are willing to show and share that part of ourselves.”

Duffield’s first in-person worship experience at First Presbyterian Church will be at the ballpark on Sunday, May 2. Even at 25% capacity, the 7,500-seat stadium will still be able to accommodate more worshipers than the church’s sanctuary.

Tilley has a final thought about dancing to “High Hopes” at the ballpark. Even though there were significant differences in style and tempo in the two songs, she felt like there were many similarities — even in the meaning found in the lyrics.

Light up your wildest dreams”

(Panic! At the Disco)

With your chin on the ground

There’s a lot to be learned

(as performed by Frank Sinatra, with music by James Van Heusen and lyrics by Sammy Cahn) 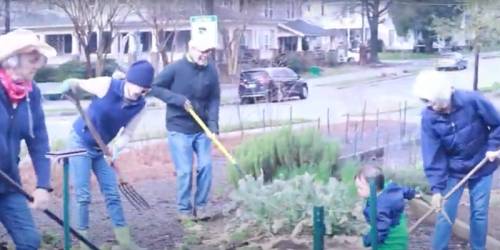 Several scenes in the video highlight First Presbyterian Church’s hunger ministries, including the Giving Back Garden, where nutritious food is given year-round to local nonprofits. (Screenshot)

“For me, the message in both is that you’ve got to have high hopes in insurmountable circumstances,” she said.  “Trust and faith will move you forward. Never, ever give up.”