Churches and residents seek to recover saying they are ‘Mountain Strong’ 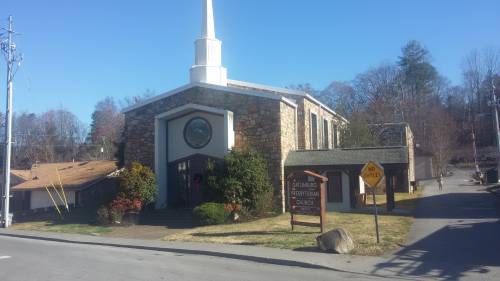 The Gatlinburg Presbyterian Church came out of last week’s fire’s unscathed aside from smoke in the building. (Photo by Greg Bennett)

LOUISVILLE – For Greg Bennett, hours seemed like days last week as he awaited the approval to travel into smoke-filled Gatlinburg to see if the church he’s pastored had survived the flames. Bennett is a commissioned ruling elder with the Presbytery of East Tennessee as well as pastor of the Gatlinburg Presbyterian Church. After rains and firefighting efforts helped put out most of the fires near town, he and other home and business owners were allowed to go into the mountain community to assess the damage.

“Visibly, the church is in good shape. I walked in the door and there was some ash and debris on the floor that had blown under the doors,” he said. The door to the roof had been blown off and the inside of the church smells smoky. I can’t see any visible damage, but I don’t know what it will take to get the smell out of the church.”

Bennett says the church was lucky compared with structures nearby.

“You don’t have to go very far from the church itself to see there is significant damage in the area,” he said. “Down the street, the Church of Christ is completely down to the foundation as are several neighboring buildings, although there was a house next to the church that wasn’t touched at all. It’s really hit or miss throughout the town.”

Members within the congregation of approximately 25 fared better than other residents in the area, according to Bennett.

“One man has been displaced and has been staying in a shelter for most of the week. I think he’s found a complimentary hotel room,” said Bennett. “Another family lost their home but, by the grace of God, his sister owns a cabin in the area and the family has a place to live for the next six months.” 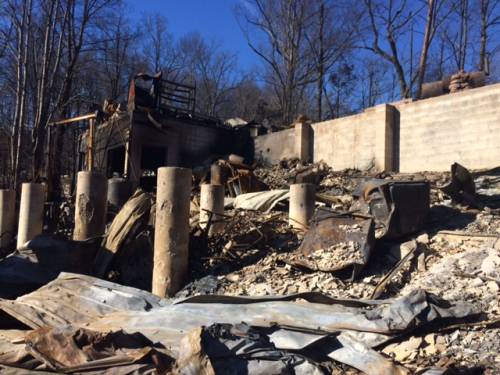 Bennett said the family has been hesitant to seek help saying they felt there were others who needed the help more. But he adds they are beginning to feel the burden of the loss.

“The husband had soaked the house with quite a bit of water before they left in an effort to try and save it,” he said. “When they got back on Friday, they found it was gone. They had a concrete room in the house where they stored family valuables, but everything was lost. When I spoke with them on Saturday they were positive and hopeful when they learned they had a place to go.”

Bennett has also been struggling to make contact with all of his congregation.

Communication has been difficult with power outages in the area. I’ve spoken to a few of them and they are certainly concerned about other members,” he said. “Yet everyone has been cooperative and seems hopeful that they can meet the needs of their neighbors.”

As many as 14 people are confirmed dead as authorities continue their assessment. So far, nearly 1,700 structures have been damaged or destroyed and 134 people injured. Rain over the weekend has helped but the threat is far from over. Authorities say fires continue to burn in some of the higher elevations.

Presbyterian Disaster Assistance deployed a National Response Team to the region to meet with presbytery leaders and help with the assessment for long-term support.

“We’ve been scouting out where volunteer host sites might be set up for long-term recovery,” said Lynette Williams, NRT lead member. “Currently, these organizations and volunteers are not being allowed in Gatlinburg. We’re being told the town may be open to the public by Wednesday.”

Gatlinburg Presbyterian Church will host All Hands Volunteers, a non-profit organization that will be working to remove debris in the area. The church has a retreat center on site that will provide housing for the volunteers that come in to provide relief work.

“Although the church is willing to support the group, I’m concerned that it will take a huge toll on the church’s already-strained ability to keep the doors open,” said Bennett. “I know there are means through Presbyterian Disaster Assistance to get assistance, but I will also seek help from area churches in east Tennessee to partner with us to help share the costs and perhaps help feed the first responders.”

Williams and her team worshipped Sunday at the First Presbyterian Church in nearby Sevierville, where they met with members to discuss the situation.

“No one at the church lost a home, but they were concerned that some members might be affected by the loss of jobs at businesses destroyed by the fire. That’s a big issue. It’s their livelihood and their business no longer exists,” she said. “Despite being a bit shell-shocked, everyone wants to know how they can help. We’ve been monitoring state emergency calls and there are a lot of organizations ready to go in to Gatlinburg when cleared.” 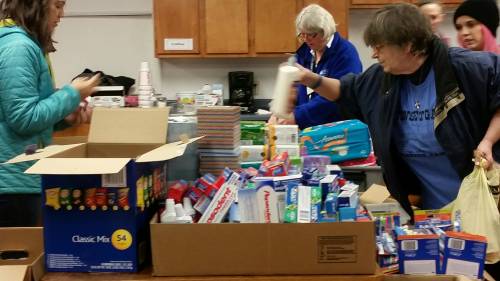 On Sunday, the response team visited the Sunset Gap Community Center just north of Gatlinburg and were surprised by what they found. “They had quite an operation going collecting food and clothes,” Williams said. “There were two trailers full of water, canned goods and toiletry items.”

Judd Shaw, general presbyter of the Presbytery of East Tennessee, said the community has adopted the slogan “Mountain Strong” to illustrate their resilience and determination to recover from the historic fires.

“One of the biggest struggles are the service people in the area who were living in economical motels and now they’ve lost their homes,” he said. “We will be placing emphasis on helping them. We seek prayers and support from a denomination that is known for responding to very difficult situations.”

Bennett says there are other ways that people can help the community recover.

“The city of Gatlinburg wants everyone to know that we are still here and want to encourage people to come visit. There are a lot of businesses in the downtown area that remain standing and there are still a lot of places for people to go,” said Bennett. “We understand that a fire zone may not be your best destination, but I think the message has been made loudly and clearly, we want people to return.”

“PDA realizes that though the immediate crises is over, the short and long term recovery is only beginning. The physical, emotional and spiritual needs will be great,” said Jim Kirk, PDA national associate. “PDA will continue to stand beside the Gatlinburg community and the Presbytery of East Tennessee in the days, months and years ahead.”

For those wishing to assist the area financially, PDA has established an account, DR000165. Click here for more information.