JEFFERSONVILLE, Indiana — On a cold and windy day in February, members of the Presbyterian Foundation Board of Trustees crossed from El Paso, Texas into Juarez, Mexico, to learn firsthand about the situation at the border.

The Rev. Dr. John M. Nelsen, co-pastor of University Presbyterian Church in El Paso and a member of the Foundation’s Board, encouraged the Board to host a board meeting in El Paso in order to provide a cross-border opportunity.

“It is one thing to read about the border situation,” Nelsen said. “It is another thing to experience it.”

University Presbyterian Church has been ministering along the border for decades, Nelsen said. “I am so pleased that this group of folks came from the Foundation a day early in order to hear about what is going on directly from the Mexican government, and from those who are working with the migrants,” Nelsen said. 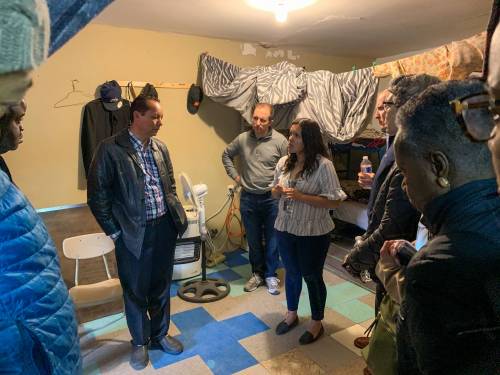 Foundation Board at church immigrant facility: Members of the Board of Trustees and staff of the Presbyterian Foundation spent a day in Juarez, Mexico, learning about the plight of immigrants hoping to come to America. They toured this crowded church facility. The Foundation’s board meeting was held in El Paso, Texas, just across the border from Juarez. (Photo by Erin Dunigan)

Context for understanding the border

The day began with an introduction by Sami DiPasqule, head of Abara, an organization that facilitates encounters on the U.S.-Mexico border in El Paso and Ciudad Juarez as well as resources migrant shelters on both sides of the border.

Those numbers were primarily single male Mexican nationals who were trying to cross the border in order to find employment. “In many ways, the whole apparatus was around this demographic, and these single men were easier to detain and deport,” he said.

But in the past five years that demographic has changed considerably. “Now, the majority coming are families from Central America seeking asylum,” DiPasqule said.

“This is not an economic or national security threat as much as it is a humanitarian crisis,” DiPasqule told  the group as it began to make its way to one of El Paso’s five bridge border crossings, connecting the two cities separated by the Rio Grande, and a 20-foot fence.

Once across to the Mexican side of what has historically been a single metropolitan area, the group heard a presentation from Mexican officials working with Consejo Estatal de Poblacion (COESPO). COESPO is tasked with general population services and development, communications and education of the public, family planning and sexual health, and the piece that is currently demanding the most attention, migrant services.

The remainder of the day was spent visiting two migrant shelters, Pasos de Fe (a part of the Presbyterian Border Ministry) and Pan de Vida, a converted community center that now houses more than 100 people.

The wind blows where it pleases

Rev. Wonjae Choi is pastor of Gwynedd Square Presbyterian Church in Pennsylvania. She serves on the Foundation’s Board and went with the group to Juarez. “I was shocked as we began our day that these Mexican government officials spoke to us with such passion for their work in helping the migrants, as if they were doing ministry,” Choi said. For Choi, the joy that she saw in these government officials — whose job could be seen as more administrative than generative — was eye-opening.

“From there, we went to visit with a pastor who converted his church into a shelter because he heard a prophetic word to help these migrant people,” Choi said. “He was just a regular pastor — I saw myself in him.”

But for Choi what was perhaps most impactful from the day was the wind.

“I was struck by the wind and I remember thinking, it wasn’t a violent wind, but it was blowing and you don’t know where it is coming from or going to,” Choi said. “I stood there along the border, with the wind blowing at me, knowing that I have a legion of people who hold me up in the wind,” she said. Her family, her church family, her privileged life — all of these things hold her up against the wind. 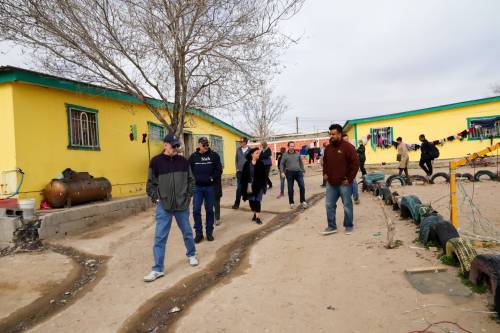 Foundation Board at immigrant facility: Immigrant families stay in these buildings as they await the next stage of their lives. Many are hoping to receive asylum in the U.S. so they can begin a new life there. Presbyterian Foundation board and staff toured this facility as part of an educational tour of Juarez, Mexico, during a recent board meeting in El Paso, Texas. (Photo by Erin Dunigan)

“But it is the same wind that blows on this side of the border as on that side — and I began to be weepy about the folks on the other side, the migrants, the displaced,” she said. “But then I was also heartened by the thought that the church is helping them, and the passionate government employees, that even in the midst there are those who are there to gird up against the wind so that it doesn’t become so bitter cold.”.

For Choi, the encounter at the border was transformative and life-altering. “I am so grateful for the Foundation for providing this experience and my prayer is that the prophetic wind is able to touch the hearts of people who are very far away and buffeted from that wind,” said Choi.

Finding joy in the midst

Bridget-Anne Hampden is President and CEO of JHR & Associates, LLC and a member and elder at CN Jenkins Memorial Presbyterian Church in Charlotte, North Carolina. Originally from Guyana, Hampden,  co-moderator of the PC(U.S.A.)s A Corp Board is an immigrant herself.

“I am a foreigner so I understand the immigration process, though my experience from 1978 is quite dated,” Hampden said. “But I understand what desperation can do to people, and the hope of finding a better life.”

Hampden was not sure what to expect from the border experience, having seen many different images in the media. “Overall it was really sobering for me,” she said.

But in the midst of that which was sobering, she was surprised to find joy.

“What was touching to me was when we visited the first shelter, to see the joy that was amongst those who were there,” Hampden said. It was one woman’s birthday, and the group sang for her over lunch — a lunch that was made by one of the Cuban migrants who also happily shared the food with the group.

It is an experience that is, as Hampden refers to it, indelibly etched on her mind.

The day she got home Hampden received a note from a friend who had had shoulder surgery and needed help. “I thought, I have got to do something — that was part of what I took away, that you have to help when you can, where you can,” Hampden said. The experience at the border has encouraged her to do her own part to make the human circle a better one, and to bring joy.

Coming together across the border

For Rev. Jason Ko, pastor of Community Presbyterian Church of La Mirada, California, the shared border experience was an ideal way to begin the Board’s time together. “I think because of the border experience we had before our meeting we were really able to come together in a unique way that doesn’t happen around conference tables or even shared meals,” Ko said. For Ko, it was a chance to see the situation, not through the lens of the news or the media, but firsthand from those along the front lines.

The shared border experience was, in a sense, a recalibration, Ko said. “It was as though it reminded us as a board of who we are as a church and what we are called to do in this world,” Ko said. “What I love about the Foundation is that it is not just boardroom people making decisions about investment, but a group of people who care passionately about the church and its mission in the world.”

Erin Dunigan is an ordained evangelist and teaching elder in the PC(USA). She is a graduate of Princeton Theological Seminary. She serves as a photographer, writer and communications consultant and lives near the border in Baja California, Mexico. Send comments on this article to Robyn Davis Sekula, Vice President of Communications and Marketing at the Presbyterian Foundation, at robyn.sekula@presbyterianfoundation.org.