Documentary to have public premiere at restored theater in the heart of Flint; showings also planned in other cities 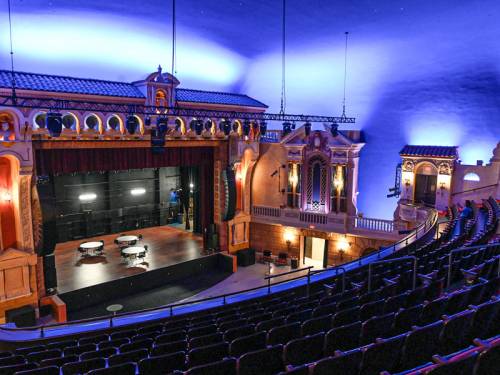 The interior of the Capitol Theatre in Flint, Mich., which reopened in 2017 after an extensive renovation.

FLINT, Mich. – “Flint: The Poisoning of an American City,” a production of Presbyterian Disaster Assistance’s Story Productions, will have its world premiere in the heart of the city whose story it tells.

The movie from director David Barnhart and editor Scott Lansing will have its first public showing, hosted by the city, at 7:30 p.m. Sept. 12 at the Capitol Theatre in Flint, Michigan. Guests will include the Rev. Dr. J. Herbert Nelson, II, Stated Clerk of the Presbyterian Church (U.S.A.), along with community leaders, experts on lead and Flint residents.

Tickets to the premiere are $10 to the general public and free to residents of Flint. The showing will be followed by a panel discussion with the filmmakers, experts and community leaders.

Immediately following the premiere, the film will begin theatrical showings with weeklong engagements at Michigan-based Emagine Theatres in Birch Run, Canton and Novi. Barnhart and others connected with the film, including journalist Anna Clark, author of “The Poisoned City: Flint’s Water and the American Urban Tragedy,” will appear at some screenings on Oct. 13. 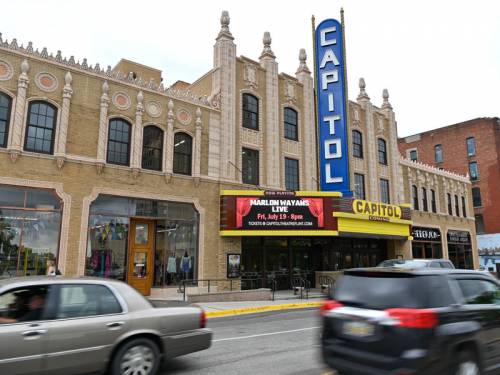 The exterior façade of the Capitol Theatre in Flint, Mich., was restored to its original 1928 look in a renovation completed in 2017.

Scouting locations for the premiere, Barnhart became excited about the possibility of unveiling the movie at the Capitol Theatre, seeing it as symbolic of the city’s revival following decades of after being abandoned by the auto industry and then suffering through the water crisis.

“When we visited the Capitol Theatre with the Flint Steering Committee, it was unanimous and clear to all of us that this is where the premiere needed to be,” Barnhart said. “The Capitol is such a symbol of what Flint once was but also, the resiliency of the community coming back. It is beautiful.”

The 91-year-old theater underwent an extensive renovation, including restoration of its 1928 façade, and reopened in 2017 to host a variety of productions and performers, including upcoming shows by Amy Grant and Buddy Guy. On a June tour, the interior of the Capitol reminded film representatives of Atlanta’s legendary Fox Theatre and Louisville’s Palace.

“Flint” poses the question, how could a tragic situation such as the water crisis that poisoned thousands of residents happen in an American city? It starts in the early 20th century, tracing the rise of the auto industry in Flint that made it a prosperous city, and then its decline after a massive General Motors plant left town. Water issues began to plague the city and led to disaster due to aging lead pipes that made up the city’s water system and government mismanagement. 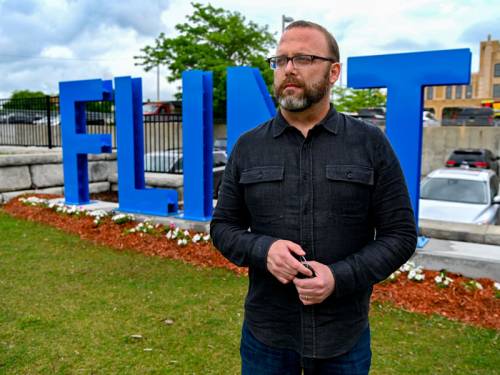 Filmmaker David Barnhart’s “Flint: the Poisoning of an American City” will have its world premiere at the Capitol Theatre in the heart of Flint on Sept. 12, 2019.

The movie makes it clear that Flint is merely a harbinger of similar tragedies festering in municipalities around the country and offers potential solutions to avoid the lead poisoning that thousands of Flint residents, particularly children, experienced.

“We are facing an urgent drinking water crisis in the U.S. that is systemic and widespread, but it does not get the headlines or attention from the wider public,” Barnhart said. “Access to safe clean drinking water is one of those essential and basic human rights and the question becomes, how can we allow for some to have access and others to be denied? The poisoning in Flint is a warning of what happens when we deny and ignore the voice of citizens and the tragic reality that this is actually happening in our cities across the country.”

Newark, New Jersey, recently made headlines for its own water issues, and “Flint” producers are making plans to take the film to that and other cities.

Other upcoming screenings include an Oct. 7 showing in Baltimore co-hosted by U.S. Rep. Elijah Cummings (D-Maryland), who emerges as one of the main advocates for Flint in the film, taking Michigan and Flint officials to task in congressional hearings for their handling of the water crisis. A few days later, the film will be shown in Atlanta at the Plaza Theatre in an Oct. 10 event in collaboration with Green Lit ATL. Additional screenings in more cities are in the works, as well as distribution on streaming, cable and satellite services.

“We are hoping to build momentum and a national conversation through each of these premieres,” Barnhart said. “From the premiere in Flint, to the theatrical release in Emagine Theaters, to the screenings in Atlanta, New York and in Baltimore with Congressman Cummings, each of these screenings will channel into wider distribution in early November on major VOD (Video-On-Demand) platforms like Comcast, Amazon Prime and others.

“The Comcast iNDEMAND release alone can reach up to 60 million homes and is a wonderful opportunity to reach and engage a much wider audience with these important issues.”