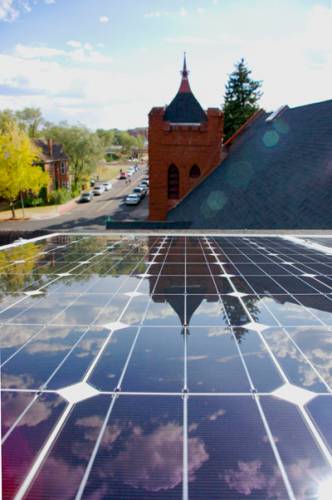 Before Rachel Davis’ current position as program director for the Flagstaff Federated Community Church in Flagstaff, Ariz., she only dreamed about solar power. She worked as a volunteer with Christians for the Earth, a group within the church that concentrates on environmental projects. One day, Davis had a budget epiphany that catapulted her and her colleagues into creating a financial argument for adapting their century old church to generate solar power.

“The breakthrough on the project came when we realized that implementing solar panels was already in our budget,” says Davis. “Our church budgeted approximately $10,000 to $12,000 per year for electricity usage, and that is an ongoing, fixed cost. If we could replace those dollars for the same monthly cost with a finite expense, as in a 20 year loan, there would be no financial reason not to convert.”

But any drastic change to the status quo rarely entails a simple solution. Davis and her co-volunteers embarked on the research, calculations and consensus building required to build both the financial and spiritual case for converting to solar power. She performed trends analysis, met with contractors and worked hand-in-hand with the building and grounds crew to hone in on the best approach for Flagstaff Federated. It was a two year process that entailed multiple meetings and information sessions before the board and congregation approved installing the panels in 2012.

“One of the biggest obstacles we faced was the attitude that ‘debt is bad,’” says Davis. “By installing the panels, we found that we could save approximately $350,000 over the next 40 years and keep more than two million pounds of carbon dioxide out of the atmosphere. And the monthly payment on a 20 year loan was roughly equivalent to the electric bill we were replacing. But our congregation skews toward an older demographic, so taking on debt was a real concern for many of us.”

Another concern was the aesthetic effect that modern looking solar panels would have on the historic site. Federated Community Church consists of a 100-year-old sanctuary, gathering hall and education building. In the spirit of preparation, thoroughness, and anticipating every conceivable pushback for implementing the project, Davis and her colleagues identified sleek, black solar panels to match the black roof of the education building where the majority of panels are located. The rest of the panels are installed on the roof of the Gathering Hall, where they can’t be seen because of the building’s height and flat roof. The historic sanctuary roof remains untouched. 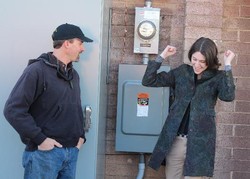 Today, solar power accounts for more than 90 percent of the church’s energy usage. Its 132 panels produce about 50,000 kilowatt hours per year. The monthly electric bill runs about $45 after the church accumulates energy production credits by producing more electricity than it uses. Most of the monthly charge is a fixed cost for billing and metering.

“We’re very pleased with their performance; they’re functioning better than originally estimated, and are definitely low-maintenance. They’re virtually self-cleaning and the only time we can’t monitor their performance is when the Internet goes down, but that’s a telecommunications issue, not a panel problem,” states Davis.

Beyond the financial impact, or its winning the 2012 Cool Congregation Challenge in the renewable energy category, solar power has had a huge impact on Federated’s identity within the Flagstaff community and around the state. Individuals, businesses and other congregations sponsored panels for $250 each, which helped the congregation fund an approximately $40,000 down payment on the installation. Sponsors could write a message on a panel’s tag that will be read decades from now when the panels are replaced; in essence creating an environmental time capsule.

“We’ve got some partner organizations in town that have converted to solar power, and we’ve met with congregations in Phoenix who are desperately seeking to get away from massive electric bills,” says Davis. “We hope to inspire others to go solar. It’s a clear sign that we care for God’s creation and are good stewards of the natural resources provided to us. The panels are part of our identity and a powerful statement of who we are and what we, as a congregation, believe in. We’ve invested in energy independence not for our generation, but for the generation to come.”

As a Presbyterian Church (U.S.A.) certified Earth Care Congregation Flagstaff Federated Church is furthering its mission of environmental activism for the next generation. In addition to the solar initiative, youth in the congregation have created a project to train church members how to compost.

If your church is interested in becoming an Earth Care Congregation, or learning more about faithful earth stewardship, more information from environmental ministries is available here.