Faulty wiring is suspected cause 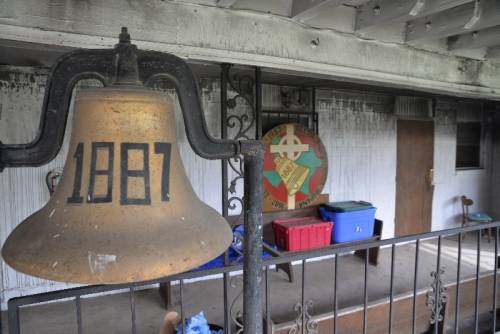 The historic Memorial Presbyterian Church in San Marcos, Texas is the oldest Mexican-American Presbyterian church west of the Mississippi. (Photo by Randall Villalpando)

LOUISVILLE – Members of a historic church in San Marcos, Texas, are making alternative plans for worship this Sunday after fire broke out earlier this week. Authorities say a police officer noticed smoke coming from the Memorial Presbyterian Church on Monday afternoon.

“The final report is not in, but the building is rather old and it looks like it might be faulty wiring,” said the Rev. Dr. Michael Miller, the church’s acting pastor. “The fellowship hall was extensively damaged, with smoke damage in the sanctuary.”

The church of 100 members has a long history in the area. It is the oldest Mexican-American Presbyterian church west of the Mississippi River, according to Miller who is also a professor at Texas State University, teaching Mexican history.

“It was founded in 1887 by a group of immigrants who came from Mexico to work in the fields in and around a little town called Martindale,” he said. “They had a death in the community and there was no priest available. One of the people who had been influenced by Presbyterian Missionary Walter Scott, performed the funeral.”

Miller says the immigrants were so appreciative, they decided to organize the church. The church moved from Martindale to San Marcos in the 1920s and constructed a wooden frame building. Around 1948, Miller says they erected the current sanctuary. 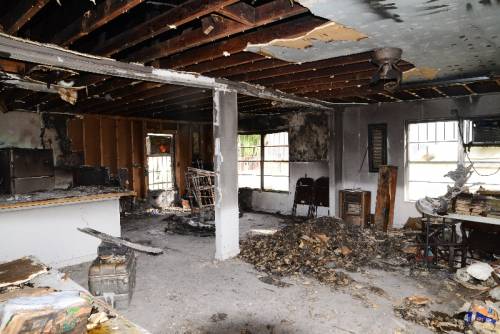 The fire damage was confined to the Fellowship Hall. (Photo by Randall Villalpando)

While they await the outcome of the investigation, Miller says the congregation is moving forward as best it can.

“Our members are very accepting of the difficulties of life. They don’t get too down or excited about anything,” he said. “They have had some recent problems with flooding and three families in the church were completely flooded about a year ago after a major storm. The San Marcos River spilled over its banks. Flooding was significant and we are still recovering from that.”

The church has been in contact with Mission Presbytery with the promise of a $5,000 grant. They have also been contacted by other churches offering assistance. Presbyterian Disaster Assistance has also communicated with the church.

In the meantime, plans are moving forward for Sunday worship.

“This is the first Sunday since the fire and we are planning to have the service outdoors. The weather is expected to be good,” said Miller. “That’s how this church started originally. They were a riverside camp and for several years worshipped in camp meeting services.”