Make A Donation Click Here >
Home › Fifteen years after Katrina, many volunteers have made disaster response their lives 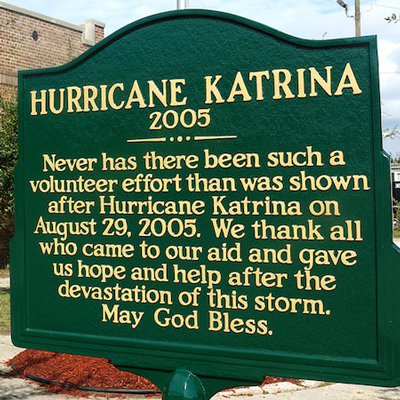 A sign thanks volunteers who responded to hurricane Katrina. (Courtesy of Joan Otto)

LEXINGTON, Kentucky — Miss Mable had taken to her bed.

Her New Orleans home was badly damaged when Hurricane Katrina struck in the late summer of 2005. Then, unscrupulous contractors stole her funds to repair the house.

“She was so depressed,” said Joan Otto, who made numerous trips to Louisiana and Mississippi with Presbyterian Disaster Assistance (PDA) following the twin blows of Hurricanes Katrina and Rita. “She stayed in her home, which was below standards. I don’t even know that she had a working bathroom. I know her kitchen sink didn’t work.

“She had meals delivered. She never got out of bed. Finally, PDA found out about this through her church or something, and we went there, and started doing the work that needed to be done.” 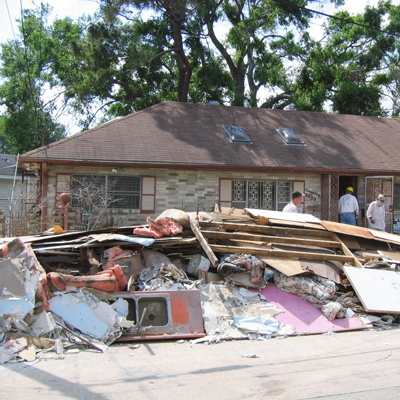 It’s what Otto, who then lived in Michigan, felt called to do watching the tragedy of Hurricane Katrina unfold on TV in the weeks following the storm.

“It hurt my heart to see such devastation and pain,” Otto said. “I had to do something.”

South Carolinian Rick Turner had recently retired when Katrina hit, “and I just felt a very strong call to go,” he said, recalling work to recover when Hurricane Hugo hit the Carolinas in 1989. 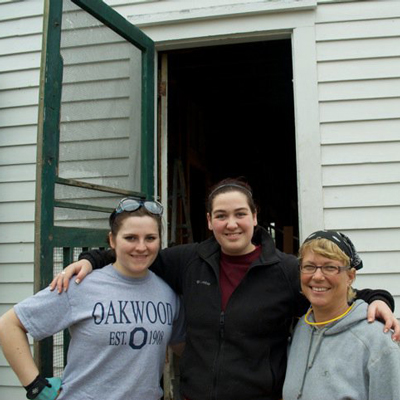 Cameron Stevens, Haley Ingram and Christina Drake met on a church work trip to help recovery from Hurricane Katrina. Stevens and Drake both went into full-time disaster response work — Stevens on the national staff of Presbyterian Disaster Assistance and Drake with the Presbytery of South Louisiana. (Photo courtesy of Cameron Stevens.)

In Dayton, Ohio, 15-year-old Cameron Stevens got her youth pastor to help talk her parents into letting her go down to the Gulf Coast for a Thanksgiving break trip to help respond to Katrina.

“I was definitely called to respond to the disaster after seeing it on the news,” Stevens said. “I couldn’t think of a better way to spend Thanksgiving.”

The Rev. Jim Kirk, PDA’s Associate for Disaster Response in the U.S., says there are a lot of people like Otto, Turner, Stevens, and even himself who felt called to respond to the 2005 storms and in the following 15 years pursued disaster response as a career or as extremely active volunteers.

Otto, like many, became part of PDA’s National Response Team (NRT) and was dubbed by her husband, a Presbyterian minister, “the mission monster.” She has racked up dozens of deployments totaling a literal year of her life. Turner was Kirk’s predecessor overseeing national disaster response for PDA and continues to work as an NRT volunteer. And Stevens, now 30, is PDA’s Associate for Constituent Relations and Outreach. 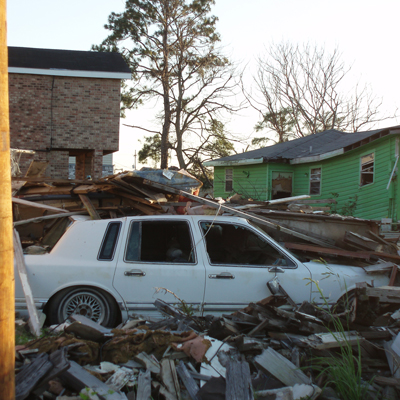 “It was one of those transformational moments,” said Kirk, who was an NRT member at the time and ended up taking a three-month leave of absence from his church to help lead Katrina response. “We saw such growth with NRT after Katrina and Rita response.

“One of the great things about people of faith is that in the face of overwhelming need, there is a deep calling to respond in very practical ways.”

Recalling Katrina, Sandra Price said, “I wouldn’t have missed it for the world.”

“Jim Cantore was half-a-mile from my house,” Price, who had just recently moved to Gulfport, Mississippi, said referring to the Weather Channel anchor who tends to show up wherever the weather is about to get really bad.

As Katrina approached, the focus of her life was surgery after severely injuring her knee in a fall.

While she said many residents of her neighborhood stayed, considering the circumstances and that she was a bit new to facing hurricanes, she evacuated. And that was a good thing, because her home was destroyed in the storm.

“My dominant feeling was grace, grace, grace, because I couldn’t do anything for myself,” said Price, who documented her experience with Katrina in her book, “Katrina’s Grace: Wind, Water and Wisdom.” Price was blessed by family and friends who gave her places to stay, response groups that helped her rebuild and even the Federal Emergency Management Agency (FEMA).

It was grace she quickly returned, first connecting with PDA as a liaison to her home presbytery, Sheppards & Lapsley in Central Alabama.

“I was essentially running a volunteer host site out of my FEMA trailer,” Price said. 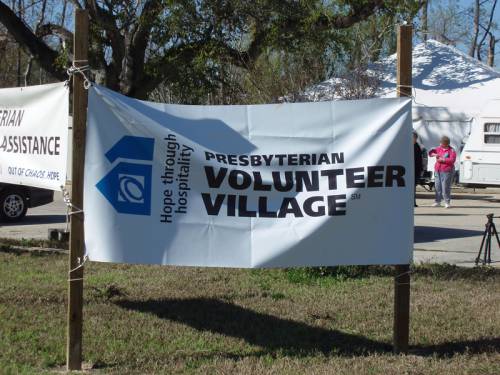 Volunteer hosting is one of the aspects of PDA work that expanded greatly in the aftermath of Katrina, as volunteer teams from across the country made trips — in many cases, multiple trips — to the Gulf Coast to help. National Response Team membership expanded too, as many people felt the call to join.

“Through the amazing generosity of so many Presbyterians, PDA has built capacity during a time of larger and more frequent catastrophes,” Kirk said. “As a result, PDA is able to bring more volunteers and more resources into presbyteries and communities impacted by disasters.” 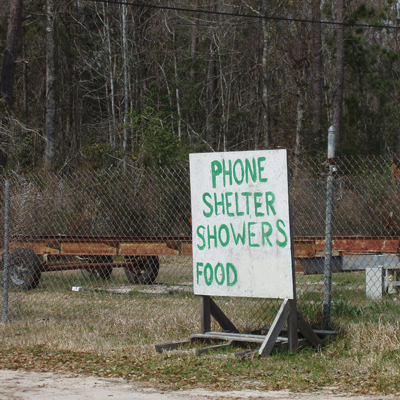 A sign in Mississippi directed people to where they could get essentials. (Courtesy of Joan Otto)

Douglas P. Macdonald of Liberty Hill, South Carolina recalls D’Iberville, Mississippi, where he did extensive work, as “the worst place I have ever been in my life, and also the best.”

“It was a disaster zone,” he said. “It looked like it had been bombed out. There were people out searching with dogs for bodies. Bodies were found at least once a week or more times than once a week for the first three weeks or so there.”

Eating dinner each night with people in the community, he heard stories of death, people treading water for eight hours, and people who were missing for weeks and months. It was also a place that was hot, humid, dirty and lacked many of the amenities Macdonald and many on his team were used to, such as hot showers and places to wash clothes.

“Just the things we take for granted didn’t exist,” he said. “But God was there.”

Dave Thalman, who first traveled from Winchester, Virginia to the Gulf Coast the day after Thanksgiving 2005, said, “We were bringing hope. Lots of times we found that ministry of presence was as important as fixing walls.”

In Gulfport, he went to a house whose owner thought he was OK after a relatively short flooding from the tidal surge. But he started to wonder, talking to neighbors, if there were unseen problems. 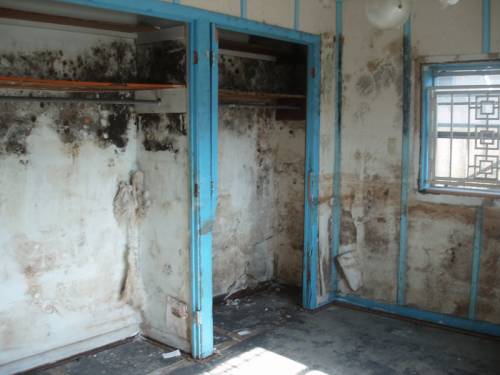 Mold was a huge problem in homes after flooding from Hurricane Katrina. (Courtesy of Joan Otto)

“I took my crowbar and pulled off the molding around some door jams and things, and there was mold, pretty good growth of mold behind his walls,” Thalman said. “He was a big man, and as I was telling him this, he literally got smaller and smaller and sort of sank into a chair and said, ‘I don’t know what I’m going to do.’”

Thalman was able to tell him, “’We have work teams that come every week. I’ve got your work order right here, and I’ll schedule this, and we can have a work team here next week, and we have materials, and we can rebuild your house for you.’ He got up and he was tall again. He was confident, and he was happy and he hugged me.

“It was amazing the valley you go down, and then you come back up.”

Turner and Stevens recalled moments of returning to places they worked and people recognizing them, even inviting them in to see their finished homes. Price recalls one of the first lessons she learned working with PDA was being willing to leave a job unfinished, “because there’s going to be another crew.”

She became instrumental in developing PDA’s resilience training, a mental health ministry which helps both people impacted by disaster and people responding to disasters handle the emotional impact.

Missourian Kathy Montgomery, who was already active in disaster response before Katrina and has since joined the NRT, recalled a woman who was in desperate need of volunteers to work on her home in Southern Mississippi. The morning Montgomery arrived with her volunteer team, the woman, who did have mobility issues, came running out of her FEMA trailer flailing her arms and yelling, “My blue angels,” referring to the blue PDA T-shirts. “’My hope! My Hope! My blue angels are here!’”

Since then, Montgomery says her work teams have been called the Blue Angels of Hope.  Otto exclaimed the name of the group when Montgomery held up a paper with its name on it, affirming a familiarity among volunteers forged over 15 years. 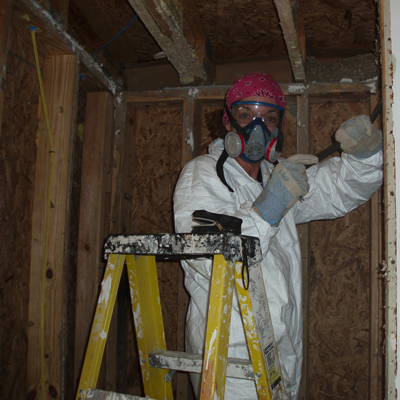 Otto muses that volunteers get as much out of the work as the people they assist, like Miss Mable, who had taken to her bed until the PDA team came.

“This woman, by the end of the week was out of the bed,” Otto said. “She joined us for lunches. She started cooking for us. This was like five days’ time that this woman went through this total turnabout.

“This is why we’re doing this. And we’re like, ‘What did I do? I hardly did anything.’ And we made such a difference in this poor little lady’s life. That’s the good stuff.

“That’s why we keep going back. It’s a God thing. God keeps sending you, and wonderful things happen.”