At an interfaith prayer service on 7 June, people from diverse faith communities issued a call to action to end AIDS as a public health threat by 2030. The call focuses on reducing stigma and discrimination; increasing access to HIV services; defending human rights; and ensuring testing and treatment for all, including children. 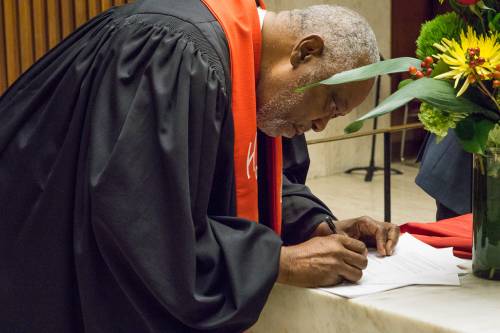 Rev. Phumzile Mabizela, executive director of the International Network of Religious Leaders Living with or Personally Affected by HIV or AIDS, urged her colleagues to remember that discussions about HIV and AIDS are ultimately about people, not numbers. “This is a life and death issue and we have a moral obligation to continue spreading a message of life and hope,” she said.

The service was a time to pray for a strong political declaration on HIV and AIDS and to strengthen the engagement of faith communities in the comprehensive response to HIV.

Although at times religion has been hijacked to prolong the type of stigma that continues to be a barrier to effective AIDS response, the faith community has largely been at the forefront of positive intervention, said Sandra Thurman, chief strategy officer for the United State President’s Emergency Plan for AIDS Relief. “Tonight we celebrate the best of our traditions, our firmly held values of inclusion, of peace and justice for all of human kind,” she said.

“It’s about naming people who have been left behind and about giving a voice to those who don’t have a voice,” Smith said.

Dr Christoph Benn, director for external relations for The Global Fund, expressed his deepest respect for the faith communities in the fight against HIV. “As national organizations, we need to redouble our efforts and, while there might be many differences, there is more that brings us together than what divides us.”

Secular and religious leaders also joined in recognizing the expanding role of faith communities in HIV and AIDS response. Dr Azza Karam, who convenes the UN Interagency Task Force on Religion and Development, recalled the era in which the UN, as a secular entity, began to open up and see the crucial role of faith-based groups just when the AIDS epidemic was at its worst. “It is a deep irony that it took the darkness of the AIDS epidemic for the secular community to begin to appreciate the role of faith communities,” she said.

Those gathered for the service not only signed a call to action, they also pledged to take the call back to their own communities and ignite, with renewed vigor, the plan to eliminate AIDS as a public health threat by 2030 through “Fast Track” targets in the next five years.

“It is time to take the great first step, mobilizing the political, technical and clinical resources to challenge AIDS afresh,” urged Archbishop of Canterbury Justin Welby via video.

Starting anew, remembering the beginning of the AIDS response, and renewing a call for action are all ways to ensure that people don’t fall into a sense of complacency, said Jessie Fubara-Manuel, representing the WCC-Ecumenical HIV and AIDS Initiatives and Advocacy.

“When I return home at the end of this meeting, I want to be bold and tell my friends living with HIV that they have not been forgotten, that none of us have been left behind,” she said.