‘Keepers of the Pass’ is third in series of monthly, multifaith conversations 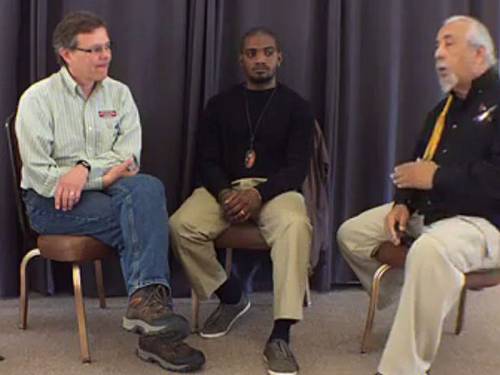 LOUISVILLE – In its commitment to provide a variety of opportunities and platforms designed to build and foster relationships with people of other religious traditions, the Presbyterian Mission Agency’s office of Interfaith Relations is continuing its new Facebook Live series, “Third Thursdays — Multifaith Conversations on Concerns of Our Time.”

On Thursday, April 20, at noon EDT on the PC(USA)’s Facebook page, ruling elder Rick Ufford-Chase, the Presbyterian Mission Agency’s associate for interfaith formation and co-director of the PC(USA)’s Stony Point Center, welcomed as his dialogue partners Chief Dwaine Perry and Two Clouds, both of the Ramapough Lunaape Nation, which is about 30 miles northwest of New York City in the Ramapough Mountains.

The Ramapough people — the word Ramapough meaning “Keepers of the Pass” — have historically understood themselves as the protectors of this critically important geographic area. Chief Perry opens the interview with a description of the ways that the Ramapough supported the attempt of the American rebels to gain strategic military advantage in the Revolutionary War. The conversation also highlights the growing importance of the Ramapough Lunaape in fighting the construction of oil and gas pipelines that threaten the watershed and much of the New York Metro area today.

“Speaking with Two Clouds about his experience as a young man of reclaiming his heritage and re-orienting his life around his identity as Ramapough Lunaape was so moving for me,” says Ufford-Chase. “One of the things I appreciate about these ‘Third Thursday’ conversations is that they are an opportunity for me to learn so much more about people like Two Clouds than I pick up in the normal course of developing a friendship.”

Ufford-Chase explains that the Ramapough Lunaape have established a prayer camp on a 14-acre parcel of land that they own in Mahwah, N.J. The purpose of the camp, he says, is to show solidarity with the work being done by the Standing Rock Sioux Nation to fight the Dakota Access Pipeline in North Dakota, and to bring attention to the reality of similar pipelines that are being constructed on ceremonial burial grounds and through critically important watersheds in the New York Metro area.

“My growing relationship with The Split Rock Sweetwater Camp and the Ramapough Lunaape has caused me to reflect deeply on the messages I received growing up Christian in the United States,” Ufford-Chase says. “The spiritual traditions of Native Americans were either caricatured and belittled or viewed with outright suspicion and even hostility. Listening to Chief Perry exhort people of all religions to join them in their prayer circle with the intent of practicing and offering the best of our own traditions causes me to rethink those prejudices in ways that feel deeply important to me.”

The video is available for viewing on the PC(USA)’s Facebook page, which may be accessed under the “Videos” section pinned at the top of the page.

The next broadcast in the “Third Thursdays” series will be live on Facebook at 11 a.m. EDT May 18.

To download the resource “Environmental Justice with Indigenous Peoples,” created by Creation Justice Ministries with support from the Presbyterian Hunger Program, click here.