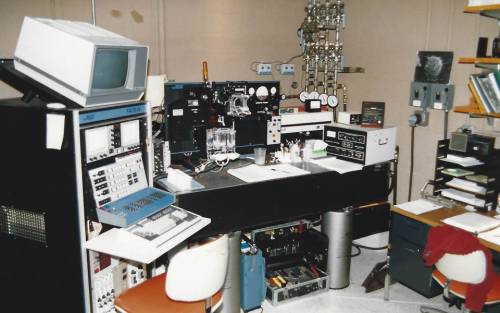 A flow cytometer helps ensure that cells are analyzed independently as they pass by a laser beam at rates of 10,000 cells per second or more. (Contributed photo)

LOUISVILLE — Commissioned Ruling Elder Lisa Allgood, a trained immunocytochemist and transitional executive presbyter for the Presbytery of Cincinnati, will present an update on Zoom about the most recent findings on COVID-19 and its impact on the human body.

Allgood grew up in the New York City area, graduating from Rutgers University with a degree in biology. She then completed a degree in immunocytochemistry at the University of Medicine and Dentistry of New Jersey, knowing she wanted to do research rather than practice medicine.

The science of immunocytochemistry helps researchers determine which antibodies will bind to specific components in the body (proteins or antigens) to trigger an immune response that helps fight infection and build immunity. A technique known as flow cytometry makes it possible to study the proteins and the immune cells at the sub-cellular level.

“The verse from Esther, ‘for such a time as this,’ has resonated around the presbytery for a while,” Allgood said. “It’s more than a bit weird to have worlds collide — an immunologist impersonating a presbyter during a pandemic unlike anything we’ve ever seen, and with the arsenal of science unleashed in understanding this thing.”

Sometimes Allgood feels as if she has inundated pastors and sessions in the presbytery with everything the science world is learning about the virus, as it is learned. “Because the presbytery spans three states, I keep everyone up to date as best I can with what each governor is putting in place for restrictions,” she said. As the Association of Mid Council Leaders learned about her background, they’ve asked for updates during Zoom meetings. Some presbyters have asked her to join in Zoom calls with their pastors as well.

Allgood spent 36 years in the pharmaceutical industry, first at Merck, Sharp and Dohme in New Jersey, where she ran the flow cytometry laboratories in the days before personal computers. During this time she worked in immunology and virology with boards of health on five continents, researching monoclonal antibodies, cellular activation, rhinovirus and a virus then known as HTLV3/HTLV4 — now known as HIV.

After realizing that she was way too social a person to spend the rest of her life alone in a little dark laboratory, Allgood moved into clinical research at Merck, working with researchers around the country testing potential medicines and vaccines in humans. She moved to Cincinnati in 1989 to work with Procter & Gamble as it started into over-the-counter and pharmaceutical product areas. She ended up spending 26 years running that company’s clinical and then regulatory divisions, working with the U.S. Food and Drug Administration across all OTC products. Because she had experience in both pharmaceuticals and over-the-counter products, she led the teams working on the switch of Aleve and Prilosec from prescription only to OTC.

In 2015, after her retirement from Procter & Gamble, Allgood worked three years for a small contract research organization, Medpace, in Cincinnati, helping to build out a regulatory group. In 2018, she retired again and, she said, fully intended to stay retired to travel, do some photography, garden, be with her daughters and volunteer on two boards that she is part of: Sinapis, a Christian nonprofit based in Kenya that trains entrepreneurs, and Women Helping Women in Cincinnati, which is dedicated to preventing gender-based violence and empowering survivors.

Rather than a cradle Presbyterian, Allgood calls herself a “prenatal Presbyterian.” Her history with the church goes back way before the cradle. 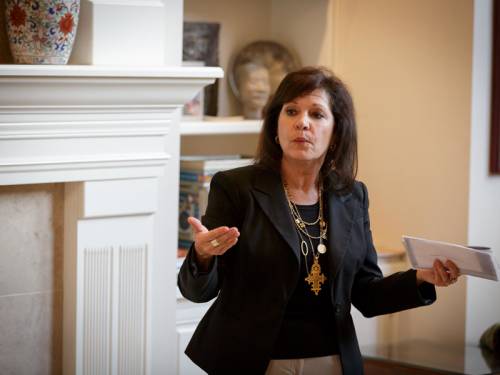 She was ordained as a ruling elder in 2005. She served on the sessions of two Presbyterian churches in Cincinnati and as clerk of session for one of these churches. In 2017, when the Rev. Dr. Nancy Kahaian joined the Presbytery of Cincinnati as general presbyter, Allgood began working on the Committee on Ministry and then on the Evaluate and Imagine Team to devote a year to dissecting and reconfiguring 30 years of presbytery practice to be more supportive and connected within the presbytery, and more relevant and influential regionally. When Kahaian left the presbytery to pursue work as an interim pastor, something she’d been wanting to do, the council asked Allgood to stay for a few months to “keep the lights on,” since she’d been such a part of the restructuring.

“Eighteen months later I’m still here,” said Allgood, who finished commissioned ruling elder training in 2019 at Kahaian’s request. “I’ve learned a ton, especially having served with Nancy, and with some great leadership here. We’ve moved the programs forward and even further into some very new and exciting areas.” The presbytery will conduct a search for a presbyter this fall.

During this time of COVID-19 pandemic, Allgood has some scientific wisdom and practical advice for individuals and worshiping communities:

So much is not yet known about the long-term effects of the virus, according to Allgood. For example, whether re-infection can occur (natural immunity for asymptomatic or mild cases is weak and short-lived) or whether the virus can become latent (stay in the body but become dormant for a period of time before re-emerging).

The virus has been shown to mutate, albeit slowly; that coupled with the observation that natural immunity appears weak and short-lived means eventual vaccines may need to take this into account, potentially making annual vaccinations and boosters necessary.

The current spikes — still the first wave of the virus — appear to come from community spread and small gatherings, including of course churches, not from the wave of protests or increased testing.

From a church aspect, Allgood recommends worshiping communities continue to take these precautions:

“The most stunningly simple personal lesson for me is that everything God has taken me through in life and in my career led me to this place and time to do this work. Thank goodness for transferable skills,” Allgood said. “And if that’s true, then everything I do today leads me to tomorrow. So I need to do it with prayerful intentionality, deliberate action and in humble obedience.”